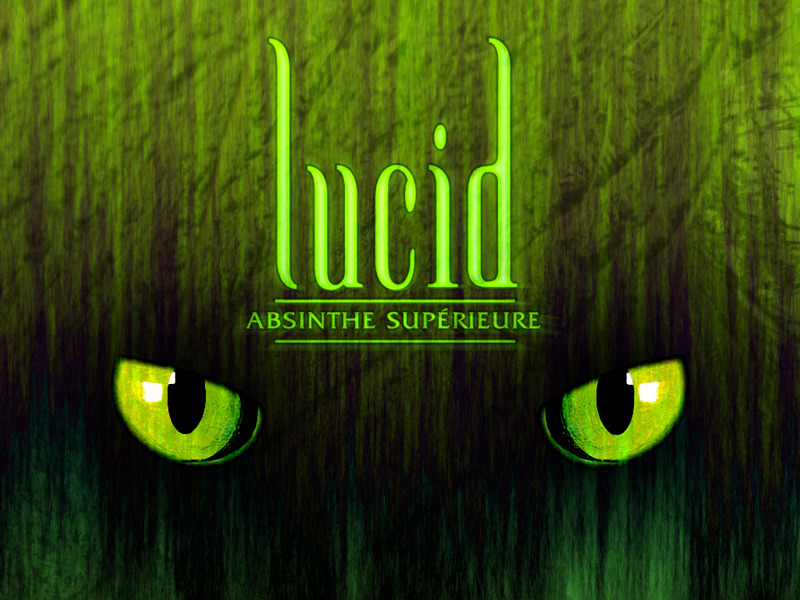 ‘Je me tiens toujours fidèle à la sorcière glauque.’ Thus speaks Enoch Soames, eponymous anti-hero of Max Beerbohm’s marvelous short story, the first one in Seven Men. Soames is a dim, talentless, fiercely pretentious poet who clings desperately to the very edge of the Edwardian arts scene. He is from Preston in Lancashire but he slips into French whenever possible. The “glaucous witch” he refers to is absinthe, the drink of Bohemian Paris at the time, the tipple of choice of Van Gogh, Toulouse Lautrec, Baudelaire, Rimbaud, Verlaine, Oscar Wilde, etcetera, etcetera. The craze for la fée verte was never quite so strong in England but in France it bewitched everyone, regardless of their wealth or status. It was supposed to have hallucinogenic properties (Oscar Wilde said it made him feel as if he had tulips growing on his legs) caused by the compound thujone found in Grande Wormwood (artemisia absinthium), its principal ingredient, and some physicians diagnosed a unique disease they called absinthism as a more virulent and demented form of alcoholism. The Bohemians rather cultivated this wicked legend and there are many contemporary paintings showing an absinthe drinker contemplating a transparent, naked green nymph who winds herself about the table – the green fairy herself. 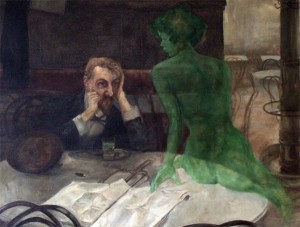 Absinthe ended up being banned in many countries including France and Switzerland (it was first distilled in Switzerland by a Dr. Pierre Ordinaire) and the U.S. (it had quite a cult following in New Orleans). Now it’s back – and not just in the form of the faux, dyed, Eastern European infusions of the last decade. There are several versions that faithfully recreate the traditional French methods using real herbs including Grande Wormwood, anise, hyssop and the dozen or so other plants that tinted and flavoured the stuff. Analysis of surviving bottles from the Belle Epoque reveals astonishing news: the amount of thujone was tiny – so small that it would pass current U.S. and Canadian laws without any problem. So what was all the fuss about back in the day? Why, in the story, did the artist Will Rothenstein say to Enoch Soames: “It is bad for you.”?

Current supporters of the new absinthe propose that the reason was a lot of cheap, fake absinthe pushed in those days, coloured green not by herbs but by copper or other toxic chemicals that induced the astonishing visions and tremors.

Hmmm… My personal jury is still out on that one (the counter-evidence from the day is rather overwhelming; then again, modern scientific analysis is sometimes accurate). Meanwhile, however, I have been enjoying my bottle of Lucid Absinthe Supérieure. It is the creation of a remarkable man from New Orleans – Ted Breaux – who has spent much of this century on a mission, first to recreate, precisely, traditional, high-quality French absinthe, and then to plead its innocence to the wider world. He makes it in France using the original stills designed by Gustav Eiffel in the 1830s. The U.S. admitted it as legal in 2007 – the first absinthe allowed in America in 95 years… And now it’s available at the LCBO in a dramatic black bottle adorned with cat’s eyes.

And there are other absinthes now, but Lucid is the bottle on my personal back rail. Like all the best old absinthes, it’s pretty alcoholic – 62% alc by vol, as opposed to, say, vodka, which is usually 40%… That’s because it’s not meant to be swigged from the bottle but served in a much more elegant way (that has always reminded me of the preparation of a ball of opium – but that was before Mr. Breaux persuaded me that absinthe was entirely innocent). You need a reservoir glass shaped like a thistle with a bulbous base that can hold about an ounce of la fée verte. You pour her in. You put an ornate slotted silver spoon across the rim of the glass and set a sugar cube on the spoon. Then you dribble ice-cold (very very important, that it’s very very cold) water over the cube, dissolving it down into the spirit. As with ouzo or Pernod, the spirit clouds – the French call the effect the “louche” – a beautiful word to describe a beautiful thing. It’s like gazing into an opal or into the swirling clouds in a witch’s crystal ball but the clouds don’t part to show an anxious Auntie Em; the liquid just stays cloudy – a pale nacreous green – while giving off suddenly powerful herbal aromas. My favoured ratio is three parts water to one part absinthe, but some fans prefer five parts water… Then you sip. If you like ouzo or Pernod or pastis or raki or some forms of arak – or sambucca, come to that – you will love Lucid absinthe. It’s like the sophisticated but sexy older sister of those tongue-tingling fennely herbal types. The name refers to the legendary state of “lucid intoxication” that absinthe was supposed to inspire, a condition brought about by the rare balance of stimulants and depressants in the herbal recipe of the drink. I cannot speak to that, of course. Lucidity was never my strongest suit.

As for sweetness – I don’t feel I need the sugar cube. I like the startling bitterness of the wormwood without the toothpaste-mitigation that sugar brings. Needless to say, the old Czech student prank of igniting the absinthe before drinking it should be avoided. Unless you want an elaborate pattern of scar-tissue around your lips.

If you aren’t so taken by the flavour of anise, try mixing it up as part of a cocktail Ernest Hemingway invented called Death in the Afternoon. He left precise instructions: “Pour one jigger absinthe into a Champagne glass. Add iced Champagne until it attains the proper opalescent milkiness. Drink three to five of these slowly…”

Lots more to discover at www.drinklucid.com .