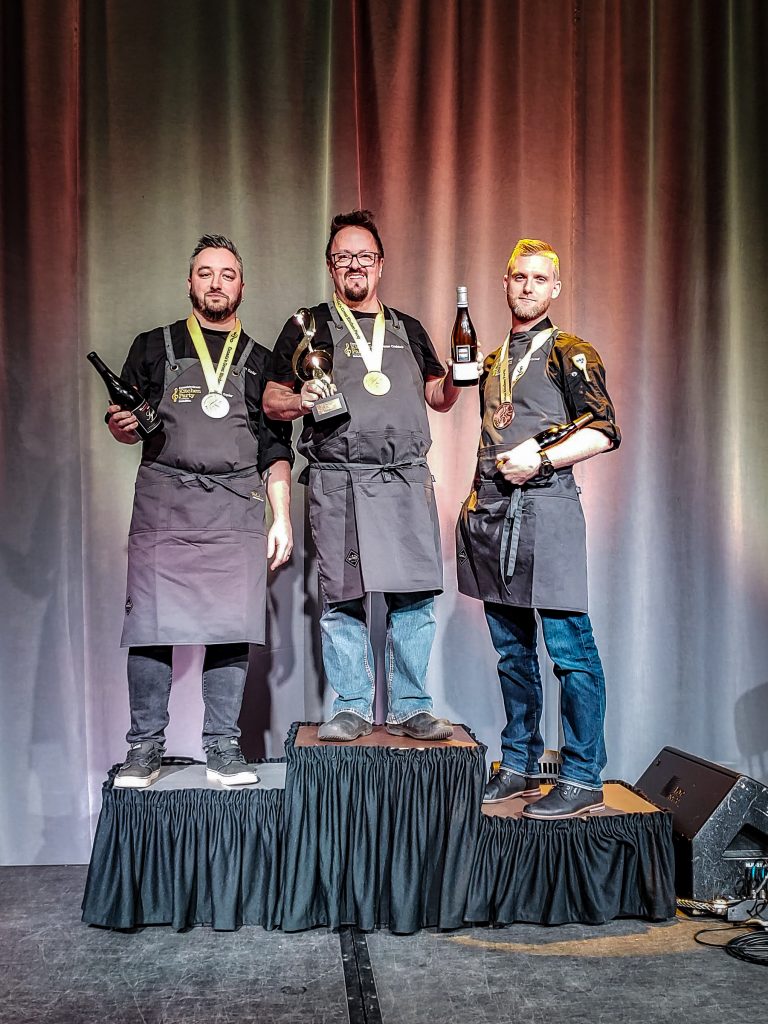 Saskatoon! Picture a sold-out crowd of 400 people rocking to amazing music, spectacular wines and an array of culinary delights that wowed the room! Our emcee, CBC’s God of Sport Scott Russell didn’t have to remind us how brilliantly Canada’s female athletes perform: all but one of the elite Olympians and Paralympians he brought up on stage were women, including Para Nordic skier Colette Bourgonje, rugby star Ashley Steacy, speed skating legend Catriona Le May Doan and world champion beach volleyball star Sarah Pavan. The audience listened attentively to their inspiring stories then jumped up and started dancing as soon as the musicians began to play – a great line-up led by Jim Cuddy and Neil Osborne, with Anne Lindsay, Devin Cuddy, Sam Polley, and Tally and Gianni Ferraro on drums and bass. 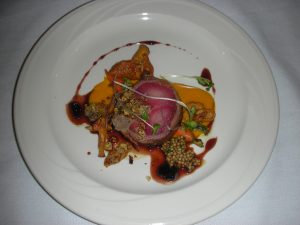 It was a strong and enthusiastic showing from the local chefs who, as always, took great care to showcase the prairies on their plates. We awarded the bronze medal to Shaun McConnell of Riverside Golf and Country Club. He took plump, juicy rabbit loins, rolled them in dehydrated beet powder then pressed them together and wrapped them with smoked pork jowl. Cooked sous vide, seared off then cut into a thick slice the meat picked up dramatic pink colour from the beet and a smokiness from the rim of jowl. Chef topped it with a game vinaigrette made from the rabbit saddle, and added crunch with a wild rice and pumpkin seed crumble. A soft pillow of carrot purée, gently flavoued with vadouvan spices  lay beneath the meat while dabs of dill pesto brought a herbal, garlicky note. Sharing the plate were some spectacular Saskatchewan chanterelles simply cooked in clarified butter, and half a firm baby carrot, traditional food of most literary and cartoon rabbits. A teaspoonful of pickled mustard seeds provided another proudly local moment – as did the final element on the plate – a reduced sauce made with sour cherries and honey from the hives at the Country Club. Those cherries found an identical echo in Chef’s chosen wine, Cave Spring Cellars 2017 Pinot Noir from Niagara. 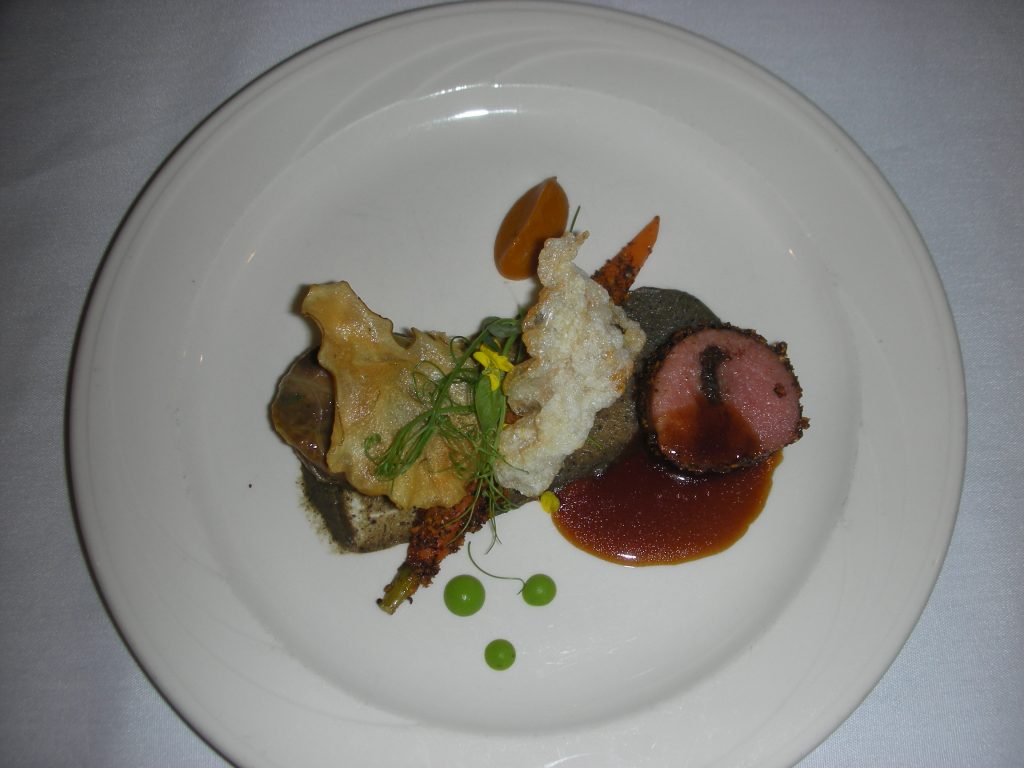 Steve Squier of Cohen’s Beer Republic and of Picaro won the silver medal with a dish he caled “Late Summer Lamb.” The lamb in question was treated in two ways. The striploin was cut in half and spread with an umami-rich mushroom paste before being rolled up and cooked sous vide, crusted with a brush of sorghum syrup and dukkah spices. The meat was gorgeously moist and tender and sauced with a reduction of the braising liquid. The lamb neck was braised with black cardamom, cinnamon and cumin, bringing a subtle but exotic warmth; then the meat was shredded and wrapped in savoy cabbage leaf to make a most superior cabbage roll. Chef set it onto a stripe of burnt eggplant purée. A slender baby carrot was gently cooked, glazed with sorghum syrup and sprinkled with more of the dukkah spice and nut crumbs; and carrot reappeared as a half teaspoonful of smooth smoked carrot mustard, a lovely condiment for the striploin. Three dots of green pea purée added colour, a dainty sunchoke crisp and a big puffed tendon brought crunch and drama to the dish. Chef’s pairing, Black Hills Estate 2016 Syrah from Oliver, BC, worked well with the spicing in the dish. 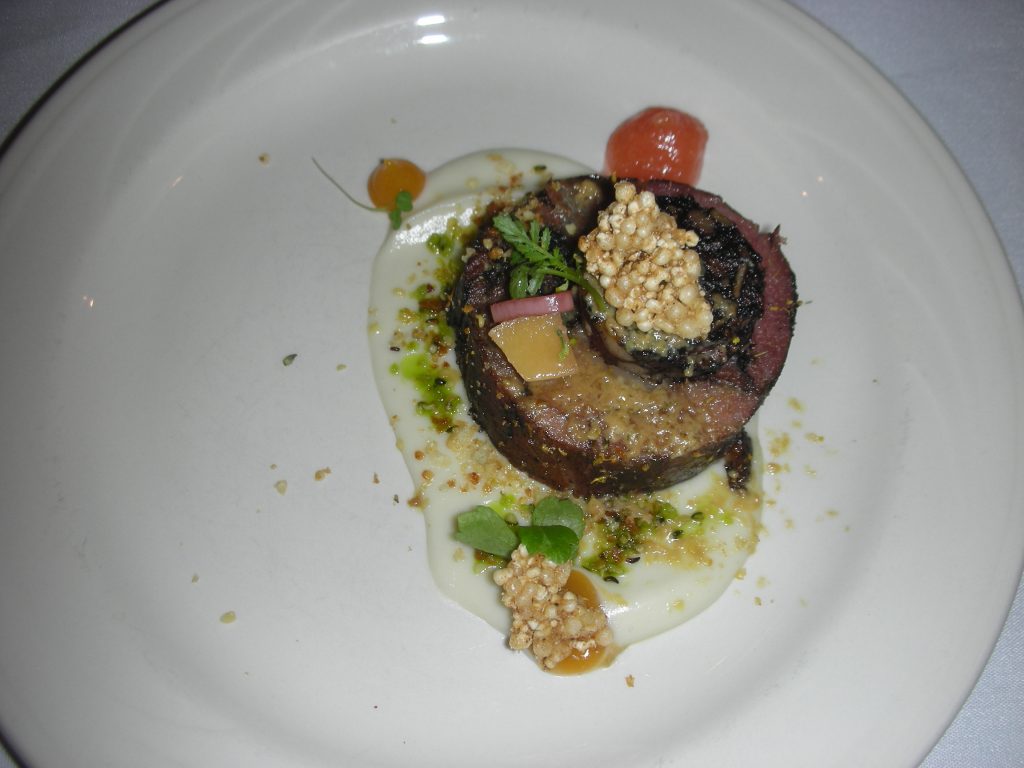 Saskatoon’s gold medal – not for the first time – went to Darren Craddock of The Village Bistro. He chose to work with wild boar from Golden Prairie Farms, cooking the neck meat sous vide as a roulade flavoured with fennel, citrus and garlic, and striated with black tracings of carbonized onion ash. There was a delightful variety of texture and a mosaic of colour to the different pieces of meat that ended up in each slice. Chef took the wild boar blood and made it into a boudin noir with back fat, oats, cream and a little judicious spicing – a toonie-sized puck of it was put onto the plate and topped with a piece of foie gras torchon that was frozen with liquid nitrogen, only to melt luxuriously over the blood pudding. Quince appeared in two guises – poached in syrup then cut into tiny dice; and as a smoth pink preserve. Summer apricots became a gel – three intensely flavourful dots to dab onto the meat. Textural contrast came in several forms: here as a tapioca crisp made with dehydrated and powdered chanterelles; there as a crumble of toasted hemp hearts, pork chicharon and brioche crumbs that had been enriched with foie gras butter – all very subtle and carefuylly used. Fennel pollen and a tiny ring of pickled onion completed the plate, with a sprinkling of microgreens (baby arugula, tangerine lace and angelica). It was a very elegant creation, focused on the wild boar but surrounding the meat with so many tantalizing details. The wine Chef Craddock chose was gorgeous and also worked very well with the dish – Closson Chase 2017 South Clos Chardonnay from Prince Edward County, Ontario.

Our congratulations to Chef Darren Craddock. We will see him at the CCC once again – this time in Ottawa! And tonight, we will be back among our dear friends in Kelowna. I can’t wait.