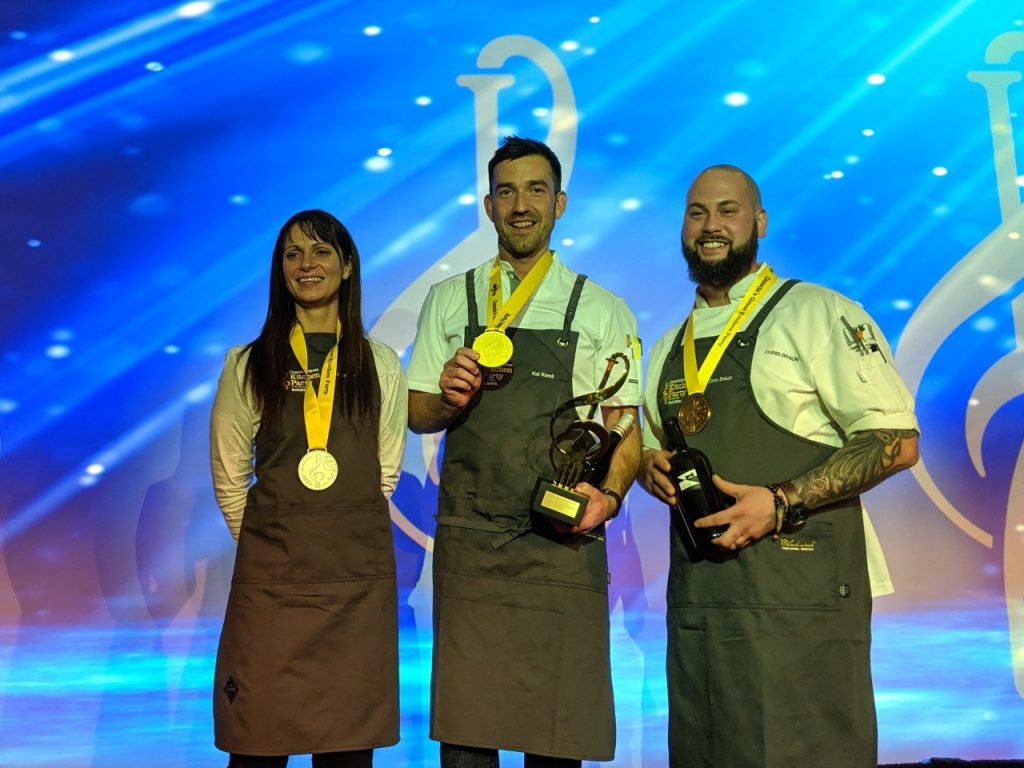 Stepping from the plane into balmy temperatures well above zero, one heaved a happy but slightly nostalgic sigh… We were back in Kelowna, cradled in the heart of the Rockies and the home of the Canadian Culinary Championships for nine glorious years. No CCC this time, but a chance to throw our first ever Great Kitchen Party in the city and find a local champion to bring to Ottawa. It seemed the sold-out crowd was glad to see us back! It was a wild and enthusiastic night with 300 guests plunging into every aspect of the program with infectious passion. Our emcee was Olympic gold and silver medalist in freestyle skiing, Kelsey Serwa, who totally charmed the room with a succession of hilariously cheesy jokes. She knew the Olympic and Paralympic athletes who joined her on stage – a star-studded group including Melissa Tancredi (soccer), Michelle Salt (Para snowboarding) and Kevin Primeau (ice hockey) – and drew fantastic stories out of each of them.

Musically, there was almost high drama as Air Canada’s endless delays threatened to trap Jim Cuddy, Neil Osborne and Anne Lindsay in Vancouver, but they made it in the nick of time, borrowed some guitars and gave us a dazzling show, most ably abetted by Devin Cuddy, Sam Polley, and Tally and Gianni Ferraro on drums and bass. Jim challenged the room to outdance Saskatoon and Kelowna rose to the occasion. It really was the party of the year.

Chef Chris Braun of RauDZ Regional Table won the bronze medal. He began by finding a wine that inspired him – Checkmate Winery’s 2014 Black Rook Merlot, a superbly sophisticated Merlot full of dark fruit, violets and tobacco notes. Instead of pairing it with a red meat, Chef decided to use octopus, braising them in the merlot and veal stock then grinding them up to create the matrix of a terrine. Whole poached octopus legs (beguilingly tender) were held by this rich, meaty farce, so that when the terrine was sliced they appeared as randomly patterned white circles. The octopus-infused braising liquid was refined down into an opulent demi-glace and there was more octopus on the plate – the smallest tips of the legs garnishing three identical assemblies of miniature elements. In each we found a tiny biscuit made with butter that Chef had smoked with edible tobacco, half a grape macerated with violets, and dots of two gels – one of grape, the other of plums stewed with merlot and violet. The bridge into the wine was broad and firm! The finishing touch was a jaunty potato crisp garnished with violet powder and dried flower petals.

The silver medal, separated from gold by the narrowest of margins, went to Andrea Callan of Red Fox Club at Indigenous World Winery. Her inspiration came from the wild products that British Columbia’s indigenous peoples treasured, starting with wild milkweed pods that her children harvested in July. Chef fermented, then lightly pickled them, slicing them up last night as a tangy garnish for her dish. They had a texture like okra and a delicate vegetal flavour. Local black salsify was another key ingredient to the dish. Some was cooked sous vide in olive oil, salt and lime juice, preserving its subtle sweetly rooty flavour. Some was turned into a “custard” – a creamy purée that used ground pumpkin seeds instead of dairy for texture. The salsify skins, dried, roasted and ground up with some dried apple, became a finishing garnish. On top of the salsify wands Chef placed a crisp cracker made from her bannock recipe, though it must be the most ethereal and dainty bannock I have ever tasted. On that lay two perfect, almost raw side stripe shrimp, delectably sweet and juicy. Chef had used the shrimps’ roasted shells to create a concentrated stock which she further reduced to a rich jelly, dotting the plate. It was a wonderfully complete, harmonious and well integrated dish. Interestingly, the judges were divided about how well it paired with the wine Chef chose – Indigenous World Winery’s 2018 La’p Cheet, a subtly off-dry sparkling rosé. Some of us loved the pairing, others were unconvinced.

The gold medal, to thunderous cheers from the crowd, was awarded to Kai Koroll of Block One, the restaurant at 50th Parallel Estate. His dish also won the People’s Choice award and the wine he paired it with won the Best of Show, giving Chef Koroll a complete trifecta! His principal protein was sablefish marinated in BC sake, mirin, white nama shoyu and ginger, then cooked sous vide and finished with a blowtorch. Its flavour and soft, buttery texture was completely intact. Across the plate we found a single side stripe shrimp curled around a mousseline of sablefish, leek and leek ash and garnished with a white powder made from koji-cultured butter. A tissue-thin disc of dashi jelly lay beneath it, and again the treatment enhanced rather than hid the pure taste of the seafood. The third main component looked like a chocolate truffle, complete with a crown of edible gold leaf. In fact it was a globe of sea urchin mousse, lightly flavoured with mirin, soy and sake, then encased in a thin shell of yuzu-infused cocoa butter and finally coated with black sesame. The unorthodox combination of sea urchin and chocolate was certainly an eye-opener – I loved it. Other treats completed the dish – tangy “caviar” made with umeboshi plums; a stripe of rich squash and miso purée; a moment of ponzu-yuzu foam; dots of profound black garlic vinegar; a single wilted tatsoi leaf. All of them added excitement and different nuances to the sablefish. Chef’s choice of wines was excellent – 50th Parallel’s 2017 Chardonnay from Lake Country, BC.

It was a great evening in Kelowna and Chef Koroll is very excited to be going to Ottawa to compete in the Championships. The full roster is now almost complete. We require only one more competitor and we will discover her or his identity next week at the last Kitchen Party of the year in Ottawa-Gatineau!