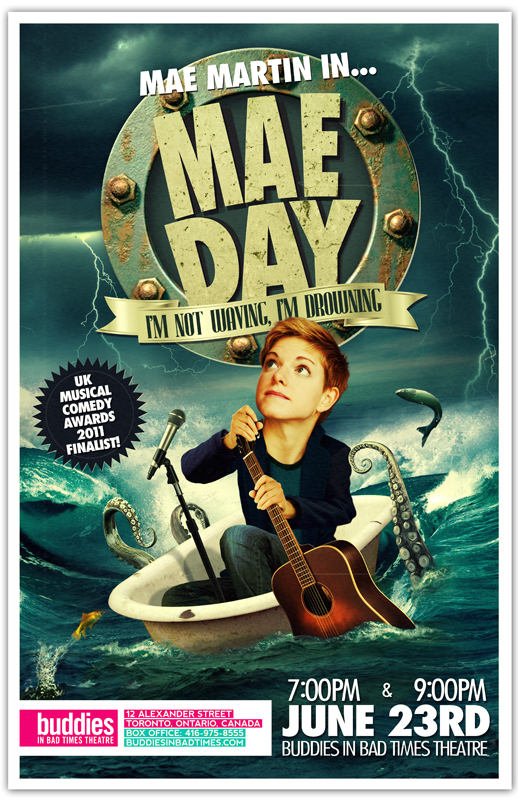 I am enormously proud of my daughter, Mae Martin, aka the hardest-working woman in comedy. She’s debuting her one-woman show at Buddies on Thursday June 23 at 7:00 pm and again at 9:00 pm, before taking it to the Edinburgh Festival in August. Tickets are available by calling 416 975 8555 (Box office of Buddies in Bad Times Theatre) open from 12 – 5 pm every day.

And here is the press release to accompany the show:

Mae Martin began doing comedy professionally at the tender age of 13, when she had braces, acne, and an all-consuming crush on the Backstreet Boys. She went through puberty and spent her adolescence on stages in dark and dingy comedy clubs across Canada. Now 23, this year she is celebrating a DECADE of comedy by debuting her one hour solo show, “Mae Day: I’m Not Waving, I’m Drowning” as part of Buddies In Bad Times Theatre official Pride Festival programming. It is a show that will then be taken to the Edinburgh Fringe Festival in August for a full run.

In the decade that Mae has been performing she has become a fixture in the Canadian comedy scene. She has been nominated for two Canadian Comedy Awards, and has been featured on the Comedy Network, the Space Channel, TVO and YTV. While she is now based in the U.K.. she continues to keep one foot on Canadian soil – most recently she appeared in Global Television’s “Global Comedians” with Dave Foley, Maria Bamford, and Jon Dore, and in January was featured on CBC’s “Q”. She also just filmed an episode of Video On Trial for Much Music.

Mae is returning to Canada for a brief time only to debut her solo sow, “Mae Day: I’m not waving, I’m drowning.” at the Toronto Pride Festival this summer – she is currently fulfilling a life-long dream of infiltrating the UK comedy scene, and she is quickly building an audience across the pond: She was nominated for the 2011 UK Musical Comedy Awards,and has headlined at the Liverpool Comedy Festival and Leicester Comedy Festival and at numerous London comedy clubs. Mae is looking forward to being back on her home turf to debut her solo show at Buddies in Bad Times Theatre as part of their official 2011 Pride programming.

Over the years, Mae’s comedy has evolved into a unique blend of comedy songs and stand-up mining her adventures in androgyny, her extreme anxiety about the impending apocalypse, and her very strong feelings about certain celebrities. The title of Mae’s one-hour solo show “Mae Day” implies a distress signal and is in keeping with Mae’s neurotic style of comedy. Is the world actually ending, or is it just Mae’s paranoia?

Mae Day will be performed at Buddies in Bad Times Theatre on June 23rd at 7pm and 9pm. The show features opening act Marco Bernardi (a young up-and-coming stand up nominated for the Tim Sims Encouragement Fund Award).