Have you heard about the mega quarry? It has the potential to be the biggest environmental disaster to hit Ontario in living memory. It would be the largest aggregate quarry in Canada, digging out over 2,300 acres of prime Ontario farmland about an hour north of Toronto, plunging 180 feet below the water table and jeopardising vital watersheds of four major rivers, including the Grand and the Nottawasaga – our drinking water. They call the region the Hills of the Headwaters for a reason. And yet there has been no Environmental Assessment!

I think it is reasonable to request an Environmental Assessment before embarking on an act of destruction of this scale. Perhaps you also think this might be a good idea.

If you were a farmer proposing to dig a small pond in a field to water your five cows, you would have to have an Environmental Assessment. Why is the mega quarry exempt? Well, there’s the rub.

It’s a quarry, you see, and quarry licenses are issued under the auspices of the Ministry of Natural Resources. In order to ensure an ongoing supply of aggregate to build roads and other structures, quarries are not required to undergo an assessment. Who could have written such a biased and misbegotten law? Why, the aggregate industry, 30 years ago, who have now hired teams of very expensive and influential lobbyists to make sure the mega quarry goes ahead as quickly as possible. The funny thing is that “The Highland Companies,” the company that wants to excavate this vast crater in the heart of Ontario, has never owned or operated a quarry of any size before. These amateurs are backed by a Boston hedge fund, into whose alien coffers the profits from this venture will pour. It doesn’t benefit Canada even financially.

The Highland Companies bought the farmland legally, announcing that they intended to continue farming potatoes there (potato farming has been the backbone of the local economy for a century – it supplies half the potatoes we eat in the GTA). Then the company started bulldozing all the farmhouses on their 7000 acres and cutting down trees. Now they want to excavate to destroy the superb farmland with its rare Honeywood Silt Loam soil to get at the limestone beneath. Here is an outline of their plans.

They will dig deeper than Niagara Falls over an area of 2,316 acres. They will blow up the limestone over a period of years (they promise six hours a day of blasting, six days a week) and will crush the limestone on-site (in one of Ontario’s windiest regions). Then they will transport the limestone dust out of the area in large diesel trucks – 7,200 trucks a day. A day! Because they are digging below the water table they will have to pump out 600 million litres of water from the quarry every day. They promise they will do this forever – because someone will have to. They also say they will return the bottom of this vast quarry to farmland when they have taken all they need from it. (Even the Ministry of Natural Resources concedes this can’t happen. “Maybe you could get a nice golf course,” quipped the Ministry spokesman. So funny…)

It reminds me of the tar sands of Alberta (I’ve been there and seen that vision of Hell, breathed in the reeking air, seen the toxic ponds) – another government-backed get-rich scheme that promises on its honour to turn everything back to pristine wilderness. Yeah right.

Only this isn’t wilderness. It’s Ontario farmland – just north of Shelburne – the countryside we all drive through on our way to cottage country. And these people want to destroy it so that a few rich men in Boston can become even richer for a little while.

Okay. As you can tell, I am a little exercised by this matter. I just got back from an inspiring meeting at Marben restaurant where we ate some of the delectable produce still farmed around this land and listened to concerned citizens make various points. Representatives of the David Suzuki Foundation were there, and of the Green Party, but the crowd wasn’t just lefty Loraxes like me. There was even a local Liberal MPP present, Michael Chong, who has seen the light. Bill Duron, former publisher of Toronto Life, was the MC; CBC’s Andy Barrie also spoke. He made a telling point, reminding us all of the power of the people-once-roused, who stopped the Spadina freeway under Jane Jacobs’s leadership – a project with even more ruthless capital behind it than this scheme has. It can be done, you see.

It can be done especially effectively in an election year.

The Minister of the Environment will listen to the people who elect him.

It’s not just NIMBYism. It’s Toronto’s food and water and air – things we take for granted in this beautiful, innocent country.

As we left the party we were each given a letter, which you will find below.

Please print it off and send them to our elected representatives. The Honourable John Wilkinson is Minister of the Environment (his address is on the letter) and it’s now time he earned that epithet of “Honourable.”

Ten thousand people read this blog (and I am eternally and humbly grateful to you all). We have only until July 11 to make our voices heard (I told you there were powerful lobbyists involved, making this happen quickly). The alternative, of course, is to do nothing. But then you must be prepared to explain to your children why the rural heart of southern Ontario was allowed to become the biggest Pit of Despair Canada has ever seen.

ALL WE WANT IS AN ENVIRONMENTAL ASSESSMENT. I think that is a reasonable request. 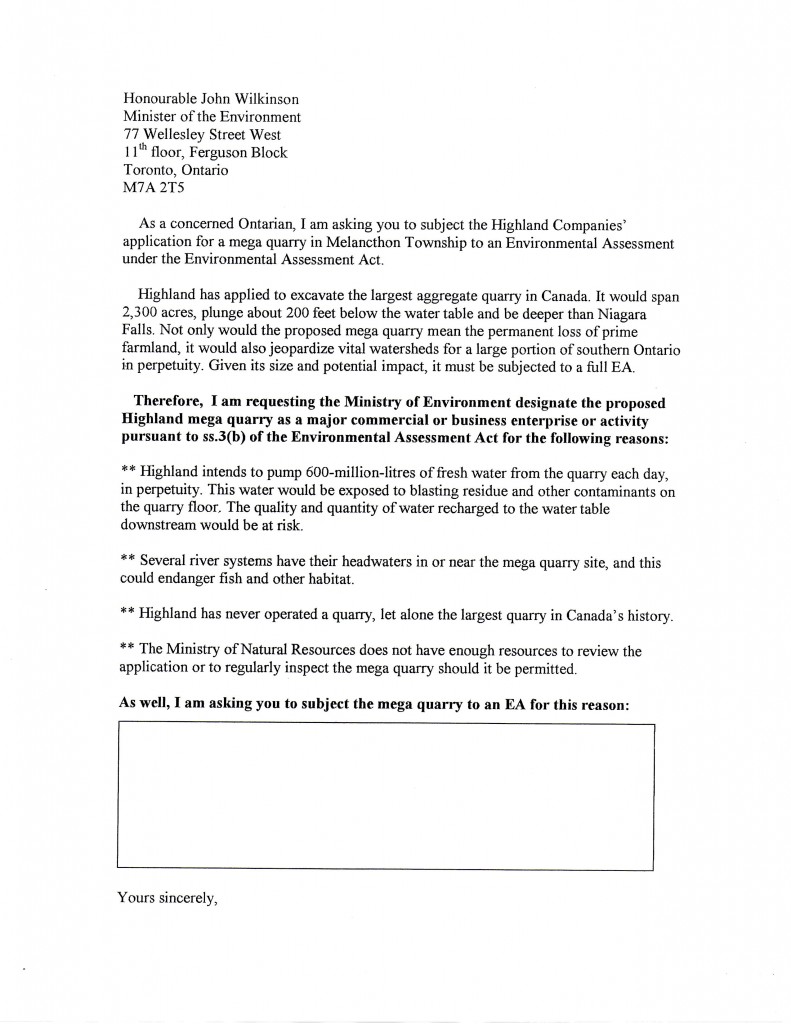