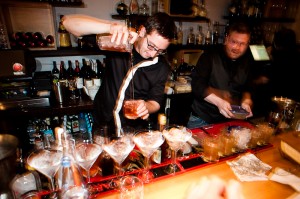 A delightful event filled my Monday evening – a cocktail competition featuring Victoria gin, the spicy, floral gin distilled by the Hunt family on Vancouver island. The rendezvous was Böhmer, chef Paul Boehmer’s Ossington hotspot, a space already famous for the height of its washroom doors, its crystal and wooden chandelier, its primo food. We were a merry band of judges on Monday – Surreal Gourmet Bob Blumer, food writer Chris Johns, Christine Sismondo (whose new cocktail club, the Toronto Temperance Society is due to open imminently) and me. Kevin Brauch was master of ceremonies, sitting on the bar and keeping the relaxed and good looking crowd in stitches. The mic didn’t work very well, so Kevin chose to shout instead – as a result of which I am now deaf in my left ear, since I was sitting beside him.
As for the contestants, almost all the top Toronto mixologists were in attendance – 14 of them in all – each making “a cocktail fit for a queen” and then a simple version of the same drink that “even a queen could make.” The winning cocktail recipe, we were told, will adorn a neck tag on bottles of Victoria gin sold at the LCBO later this summer.
The standard of the competition was impressively high throughout and the powers of imagination shown were astinishing. Everyone made some play on the theme of Queen Victoria (her youthful face adorns the bottle). I scored Rob Montgomery of the Miller Tavern full marks for presentation for his Brooklyn Queens – a hot concoction simmered for hours and consisting of gin, a chopped-up pineapple,some Madeira, some vermouth, some LBV port, lemon juice, honey, cinnamon sticks, cloves, star anise and orange zest. He served it in a miniature china bath tub accompanied by a dainty teatime sandwich of gin-soaked smoked salmon.
All the other cocktails were decently chilled, some in tumblers or shot glasses, two in tea cups, some long, others short. I was looking for recipes that would enhance the flavour of the gin rather than mask it – and that narrowed the field. Many riotous hours and 28 cocktails later, the judges came to our unanimous decision. The winner was Moses McIntee, formerly in charge of the bar at Ame but now competing under Sidecar’s banner. He called his drink The Old Vic and the gin shone through beautifully. It was a fascinating cocktail, like a complex, full-bodied extrapolation of a Negroni made with gin, Campari, bittersweet earl grey tea syrup and served in a Martini glass topped with a creamy head of Earl Grey tea foam. A purple pansy petal lay on top as a garnish. Congrats to McIntee, whom I understand may now be joining Sismondo at the Toronto Temperance Society.
A charming thank you to the judges was a small bottle of something I have never tasted in a lifetime devoted to the pursuit of gin – an oak-aged gin, also produced by the Hunt family. It’s delicately coloured, like a very pale Scotch, and has a startlingly interesting flavour – the gin’s botanicals still loud and clear but energized by another layer of bittersweet, tannic flavours. An intense little novelty, and one to be sought out by every true collector.