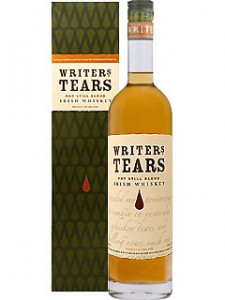 I believe in the social benefits of taxation. It’s how those of us who are lucky enough to find jobs can still hold up our heads in a Canada that is being split increasingly cynically into the haves and the have-nots by the Harper government’s divisive policies. Taxation is also responsible for a delicious Irish whiskey I tasted this week. It’s called Writers Tears (the link with the far right’s disdain for the liberal arts is another curious coincidence) and it will be launched at the LCBO on March 3rd, so dip your quills into your bottle of emerald-coloured ink and scratch a shamrock onto that particular square of your calendar. There was a time in the 19th century when Irish malt whiskey ruled the world, accounting for 90 percent of the whiskey or whisky exported from the British Isles. The Westminster government noticed and decided to tax Irish malt whiskey. The response of the Irish distillers was to add lots of unmalted barley into the mash that would end up in their pot stills, to be distilled three times in the labour-intensive way that distinguishes Irish from almost every Scotch.

In 1831, a much more efficient kind of still (the Coffey or patent still) was invented by an Irish excise man called Aeneas Coffey. It produced cleaner, lighter, more insipid spirits and these grain spirits were welcomed by the Scots as a way of lightening single malt Scotch into blended Scotch. There was an outcry in Ireland both from the malt whiskey aficionados and those who enjoyed the recent whiskeys made from malt and unmalted barley. For the rest of the century, the major distillers refused to use the Coffey spirits, remaining loyal to the whiskeys now known as Pure Pot Still. But the world moved on. Especially the world of export commerce. Accountants and auditors had no time for character and loyalty. Gradually Coffey-still whiskeys began to encroach into the old-school Irish spirits. The poets – and Ireland is nothing if not a land of poets – called out in favour of the old ways, but the sons of Fomor prevailed. Blended whiskeys and malt whiskeys supplanted all but a very few examples of the Pure Pot Still style. (I had better add here that I love almost all Irish whiskey and have no personal objection to this lush and infinitely variable blending, except when wearing the tragedian’s mask required for this particular story).

Anyway, the point is that right now we have a lovely opportunity to taste an Irish whiskey that is free of those leavening grain spirits. Writers Tears is a rich and very unusual blend of Pure Pot Still whiskey and pure Irish single malt whiskey from the same company that makes a premixed Irish Coffee beverage and a single malt Irish whiskey called the Irishman, though you won’t find that name on this bottle. Go to the web site however, and you’ll see a picture of Bernard Walsh, who founded and owns the company with his wife, Rosemary. Walsh has access to some fabulous spirits produced by Irish distillers which he purchases and vats into his own blends. Irishman 70, Walsh’s creation from a few years back, was a similar spirit to Writers Tears, that is to say a blend of Pure Pot Still and malt whiskey but with a considerably higher proportion (70 percent) of malt.

The first thing you notice about Writers Tears is the lovely round body and full rich flavour. Not only is this uncut by cleaner, lighter spirits, it is also allowed to go into the bottle without being chill-filtered. So if it sometimes shows a haze under cool conditions, it has lost none of its original nuances. The aroma reminds me of honey and marmalade streaking the fruity barley. There’s a hint of citrus in the flavour too and an initial flourish of spicy, malty sweetness that quickly leaves the stage to drier, firmer characters. The honey-marmalade comes back as a pianissimo echo of the aroma to provide the final moments of a decently long finish.