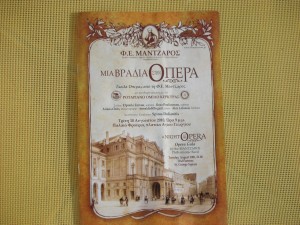 Tonight I was invited to a lovely dinner at a restaurant I didn’t know, called Monolithi, in the hills behind Acharavi. My hosts were Richard Woods and his wife, the sculptor Katherine Wise, an English couple who moved here four years ago and have restored a stunning house across the valley from Monolithi. Richard is the guiding hand of a new enterprise, the Corfu Chamber Opera, which is seeking to re-establish the island as a centre for excellence in opera. It flourished here for two hundred years under the Venetians (Italian singers would include “applaudito in Corfu” on their resumés as an impressive credential) and on into the 20th century, until a German bombing raid destroyed the opera house in 1942. The artistic director of this exciting venture is Corfu-born soprano Rosa Poulimenou and you can find out more about it and how to become a sponsor at www.corfuchamberopera.gr.

Dinner was delightful – we all shared half a dozen mezethes: moist, lightly smoked trout with raw onions and tomato; an onion pie that was completely different from the one at Foros, open-faced and using a thin pizza-like crust instead of phyllo; a platter of sturdy lamb chops avec ses pommes frites; a big bowl of horiatiki salad (expertly dressed by Katherine) and some pretty good tzatziki. Crisp little deep-fried oyster mushrooms were the star attraction, needing no more than a quick squeeze of lemon. More than we could finish, as it turned out, but we certainly did the feast justice.

We talked a lot about the opera company’s latest triumph, a most impressive evening staged last week in the Old Fortress of Corfu Town. My friend Thelma and I had decided it could not be missed. It took us an hour to drive to town and then almost as long to find parking as the traffic police had blocked off certain key downtown streets around the ’Spianada, causing appalling jams and bottlenecks. We finally left the car on the sidewalk a good mile away around Garitsa Bay and sped off on foot through the crowds that ambled along the old stone promenade at the water’s edge. We passed the occasional grilled corn-on-the-cob seller but were in too much of a hurry to pause. In the distance, the great limestone outcrop with its impregnable citadel loomed out of the placid waters. When the British ruled the island in the first half of the 19th century they added quite a few touches to the old Venetian fortifications, including a church that looks (most incongruously) like the Parthenon. I had assumed the concert would be held there but instead the stage had been built in the open air on the vast parade ground in front of the church. The massive battlements rose up on every side, lined with opportunistic opera-lovers unwilling to pay the tiny price of 8 euros for a seat. By nine o’clock, the evening light was fading into night and stars were appearing overhead. Then the stage lights came up and the performance began.

Over two thousand people had turned out and a murmur of appreciation went through the audience as the musicians took their seats. The players were the Mantzaros Philharmonic band, the beloved local ensemble of brass, woodwind, timpani and percussion under the baton of the dashing Spiros Dolianites – all of them, including the maestro, wearing their white military-style jackets with black and white lanyards swinging around one shoulder as if they were Napoleonic hussars. They opened the program with a selection from Verdi’s Nabucco – a familiar part of their repertoire judging by the satisfied smiles and approving nods of the crowd – then on into the Barcarolle from Offenbach’s tales of Hoffmann. Rosa Poulimenou and Greek-Canadian mezzo-soprano Ariana Chris sang most beautifully but no one could see them! Ah, wait! There they were up on the battlements, tiny spotlit figures in their glittering diva gowns, cunningly amplified. The sound system was the most impressive technical achievement of the entire night – exceptional clarity with just the faintest romantic echo from the towering cliff face beside us.

And so we were off on a three-hour program of best-loved arias and interludes, duets and ensembles from Mozart, Rossini, Mascagni, Verdi, Puccini and Bizet, plus a haunting work by P. Dierig for solo trumpet and band, brilliantly executed and once again taking advantage of the dramatic setting with the trumpeter high and far away on an outcrop of defensive masonry behind the audience. It was odd at first to hear the opera music played by a band rather than an orchestra – the absence of strings particularly noticeable in the Mozart – but our ears soon grew accustomed to it. Odd, too, to hear the audience singing and clapping along as baritone Akis Lalousis gave us the Toreador’s song from Carmen, but why not? This is Greece and we do not stand on ceremony here.

Dolianites conducted with just enough flamboyance to cause a flutter in the hearts of the ladies in the audience. At the end of each aria, in the old tradition, he left the podium to kiss the hand of the soloist (or embrace him if he were male) while the band, abandoned by his baton, found its way to the finish. The singing was uniformly excellent. Soprano Elpiniki Zervou closed the first half of the evening with favourite arias from la Traviata. Albanian tenor Armaldo Kllogjeri disdained the microphone (I could imagine the guys on the sound board pulling out their hair) but rose to the occasion as only a tenor can, closing the evening with (what else) Nessun dorma from Turandot, a rousing rather than contemplative rendering which was just what the crowd wanted.

For me, the performance that outshone all others was that of Ariana Chris, especially in her two songs from Carmen where a little subtle acting and sexy merriment took everything to a new level. The crowd stopped talking; cell phones went unanswered. All attention was on the gorgeous mezzo. I gather that she is now based in Toronto again after some years in New York. I shall be scanning the papers for news of any recital.

Walking back through the Fortress and across the deep moat that separates it from the world, we were pleased to see some of the younger members of the band embraced by their doting parents from the audience. The teenagers were playing it cool, but their faces were flushed with pride.

Next up for the Corfu Chamber Opera is the first ever performance in Greece of Mascagni’s little known opera, Silvano – “a Cavalleria Rusticana by the sea” according to Richard Woods – some of which found its way onto the soundtrack of the movie Raging Bull… The Apollonia Symphony orchestra from Albania will be playing and the production is designed by Mascagni’s grand-daughter. Sounds like great fun, but alas, I will not be here to see it.