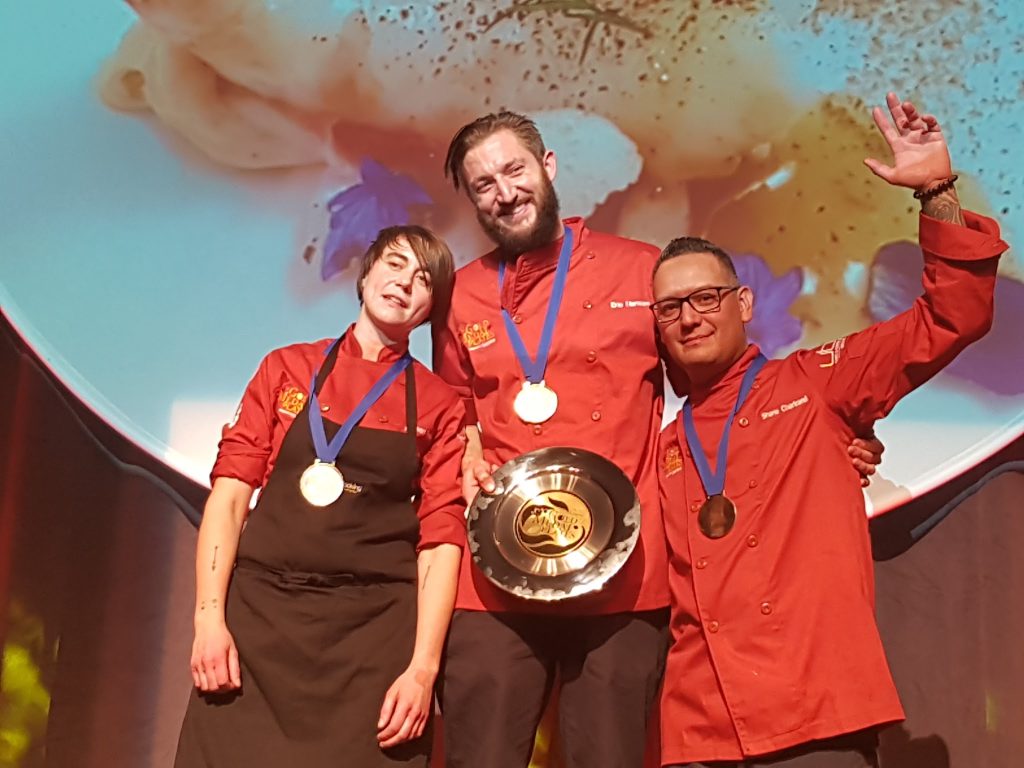 Edmonton – and the first great big GMP party of the year! The Shaw Centre was sold out weeks ago and the city had come to party, giving boisterous ovations to a host of Olympians introduced by our brilliant emcee, Scott Russell, and then to our awesome musicians Alan Doyle, Corey Tetford, Barney Bentall, Dustin Bentall and Kendel Carson, not to mention another one to the chefs who performed their own dazzling gastronomic decathlon to the delight of all. The standard was higher than ever and it was a privilege to taste their creations, especially in the company of an elite posse of judges led by Senior Judge Mary Bailey, who is a food, wine and travel writer, certified sommelier and publisher of The Tomato Food & Drink. Judging with us was chef Chris Wood; chef, author and owner of Kitchen culinary studio, Brad Smoliak; and two guest judges – the chef who won the Canadian Culinary Championship for Edmonton in February 2015, Ryan O’Flynn, and the executive chef from the Hotel Ranga in southern Iceland, where some of us will be going next June, Chef Karl Johann Unnarsson, who had flown in to Edmonton to see a GMP event for himself. Rounding off the panel, of course, was last year’s Edmonton gold medal winner, Chef Jan Trittenbach of Solstice Seasonal Cuisine.

Marks were extremely close – less than a percentage point separating silver from the bronze-medal-winning dish created by Chef Shane Chartrand from Sage. He called it “Charcoal and Smoke” and decorated the plate with a cuttlefish-ink-powder stencil of a Haida Gwai-style image of a whale, emblematic of the Pacific coast seafood that centred the dish. Six elements, arranged in a circle around the plate proved to be a litany of pleasures. There was a small piece of sablefish, rich and fatty, that chef had cooked on a Japanese barbecue set up on a balcony of the Shaw Centre. The charcoal gave the fish skin a marvellous charred flavour that contrasted brilliantly with its sweet fattiness. A morsel of perfectly textured albacore tuna sat upon a spoonful of flavourful creamed corn, while a single Bruusels sprout leaf cradled corn kernels and morsels of vegetables like individual jewels. Close by, a miniature drum of fondant potato begged to be dipped into a tiny pool of Marsala demiglace trapped inside a curled petal of white onion. The dramatic garnish was a substantial piece of a fish’s spine, its sharp ribs impaling a small coin of salt-roasted beet. Chef’s wine match was the Culmina 2015 Unicus Grüner Veltliner from B.C. – the first Grüner ever to be made commercially in Canada. Its acidity cut the richness of the sblefish perfectly, though some judges felt the wine was too big and intense for the delicate vegetable components on the plate.

Chef Doreen Prei of Get Cooking won the silver medal. She had gone to great pains to source supremely fresh salmon from Iceland (winning great approval from our Icelandic judge) and she set an impeccably timed piece of the pan-seared fish on the centre of her plate, topping it with crushed, cold-smoked pumpkin seeds. Above and below it was a tiny mound of a thick, very rich, chilled purée of chanterelles and celeriac, flavours that harmonized with each other beautifully and also flattered the taste of the salmon. Two Brussels sprout leaves, charred to a golden brown, added symmetry and offered another variation of the sweet nutty spectrum of flavours on the plate. Extra interest and richness came from a pale sauce made with buttercup squash and miso while a final touch of strewn seedlings was visually inspired. Chef Prei chose a Pinot Noir as her match – a natural pairing with salmon and chanterelles that worked well: the 2014 5oth Parallel Pinot Noir from the North Okanagan.

And our gold? It was the most refined and courageous creation of the night and it came from Chef Eric Hanson of Prairie Noodle Shop. In terms of size, it was barely two bites big but Chef achieved a number of extraordinary and powerful effects to enhance his protein – an exquisite spot prawn poached in smoked sturgeon broth. Juicy and pink, and so carefully peeled, it arched up off the plate like a scorpion’s tail. For sweetness Chef added a tiny dehydrated peach-flavoured meringue. For acidity, he placed drops of an intensely tangy plum preparation and also made a purple powder from the fruit. His sauce, most judiciously applied, was a dazzling concoction finished with charred kelp, peach juice and the spot prawn shells. A scattering of teeny garnishes gave colour, form and yet more fleeting flavours – a ring of green onion, a frond of dill, a grain of puffed wild rice, a flake of smoked Maldon salt, the purple and blue petals of pansies and bachelor’s buttons… Chef’s match was the Summerhill 2014 Ehrenfelser from the Okanagan, an off-dry, heavy-bodied white wine that was more about vanilla and tonka bean that citrus. It worked with the shrimp and peach components in a way that reminded me of that classic old dish of lobster and vanilla sauce – most seductively!

Chef Hanson was a worthy and popular winner with the crowd of 700 guests. He seemed particularly pleased with the new prize GMP is awarding this year to the gold medallist in every city – a week’s stay for four people in the Vineyard Villa that is part of Gold Medal Plates’s Italian home from home, Borgo San Felice in Tuscany.

It was a triumphant evening all round with remarkably robust bidding on the GMP trips but some of us had no time for the celebratory after-party, buttoning our coats and heading straight for the airport to catch the 1:35 a.m. flight to Toronto and then on to St. John’s for the next GMP gala. Did we make it in time? Watch this space to find out.