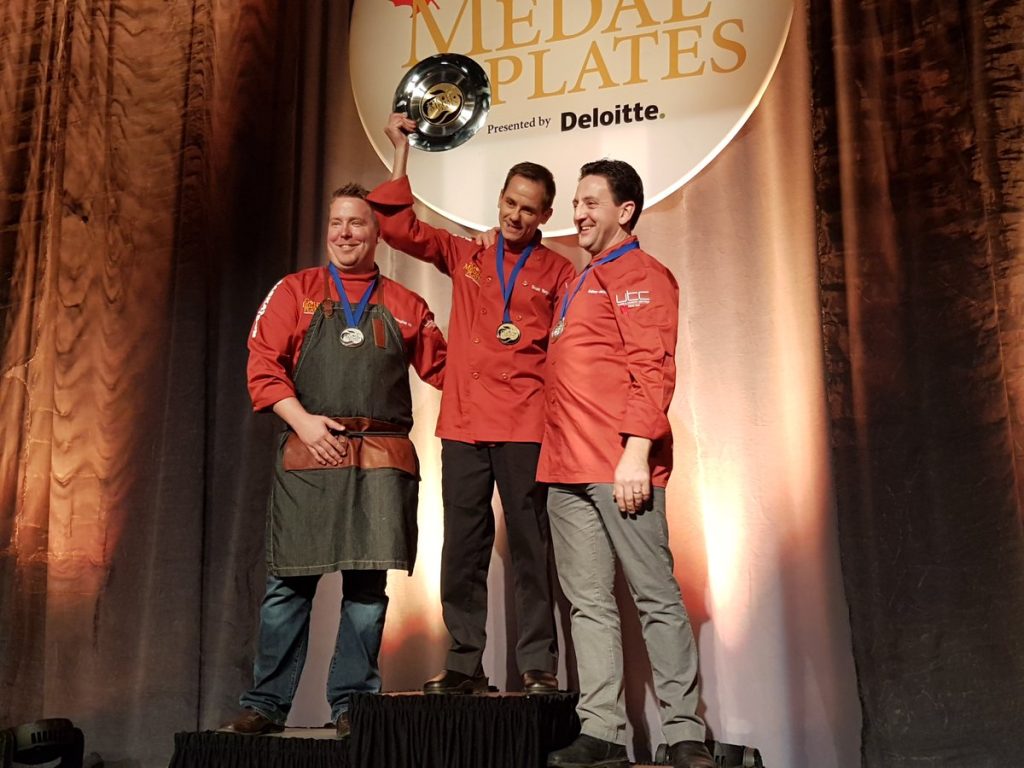 Saskatoon! The early morning ride across the prairies from Regina on our private bus was lovely fun, giving the GMP team time to make merry or catch up on some sleep, each according to his or her needs. Then it was on to the VIP reception in the friendly confines of our original S’toon home, TCU Place. Regina had been a total blast; Saskatoon was just as brimfull with positive energy, the sold-out crowd hanging on emcee Catriona Le May Doan’s every word and bidding like crazy on our enticing auction trips. Once again the musicians wowed the room, playing on after everything was over to the delight of all. A huge thank you to Jim Cuddy, Ed Robertson, Barney Bentall, Anne Lindsay, Devin Cuddy and Sam Polley.

Looking back over GMP’s eleven-year run, it’s great to see how the imagination and finesse of the competition dishes has risen in our cities. Last night, the chefs of Saskatoon presented a fascinating array of appetizer-sized experiences, keeping the judiciary enthralled throughout the first part of the evening. Perched on a dais and eating off gold chargers, protected from the throng by the ramparts of the silent auction, we were led by our Senior Judge for Saskatoon, writer, caterer and dining columnist for Planet S magazine, leader of Slow Food Saskatoon, Noelle Chorney; together with poet, author, chef, restaurateur and co-founder of Slow Food Saskatoon, dee Hobsbawn-Smith; restaurateur and founder of aha.solutions, Janis Hutton; chef and culinary instructor Michael Beaulé; chef and the first Saskatoon Gold Medal Plates champion, Dan Walker; and of course last year’s gold medal winner, Chef Darren Craddock of Riverside Country Club.

We awarded the bronze medal to Anthony McCarthy of The Saskatoon Club. His dish was inspired by a family trip through Saskatchewan in summertime and he called it “From Lake to Forest Plate and through the Farmer’s Field.” The “lake” was a piece of Dore Lake pickerel, perfectly cooked, juicy and flavourful with an impeccably crisp skin; a curl of silky guanciale lay on top. The forest was represented by a very naturalistic “fallen log” made of a tubular lentil-and-flax cracker sprinkled with dehydrated pine mushrooms and black truffle salt and filled with a spongey green moss – it had started life as kale but ended up transformed by molecular means into a texture like the inside of a brioche. Strewn around the plate were other woodsy treats – soft chanterelles, two perfect fiddleheads, flower petals and grains of puffed wild rice to represent pine needles. Standing up for the farmers, a spherical fritter was filled with hot, creamy puréed corn – an intensely tasty surprise that stole the show. A mound of fava bean risotto was another lovely element. The plate was dusted with “soil” of roasted, powdered root vegetables and dotted with a number of pungent gels, one tangily citric, one offering spicy heat, the third a creamy fennel custard. To match such bounty, Chef chose a fine Niagara wine, the 2015 barrel-fermented Chardonnay from Trius.

Our silver medal went to Christopher Hill of the Delta Bessborough hotel. His elegant presentation centred on gorgeous black cod, cured for six hours then lightly cold-smoked. It was crowned with impeccably fresh sea urchin that gave the dish a wonderful taste of the sea and more urchin appeared as a finely grated bottarga, adding awesome umami to the dish. A teaspoonful of Northern Divine caviar on top of the uni further amplified the marine theme while a piece of the cod’s skin, salted and dehydrated, became a dainty cracker. Two sauces both worked beautifully with the fish, one a bold green stripe up the side of the plate, made from charred and puréed shishito peppers and carrying lots of spicy heat; the other a rich fermented black garlic hollandaise, made even blacker with a touch of charcoal. Here were whole morels from the North West Territories, picked and sun-dried in their season then reconstituted for our pleasure; and there a dab of white foam – a bacon dashi espuma. A judicious scattering of blue borage flowers and pea greens completed the plate. Chef’s wine match was one of the best pairings of the evening – Pearl Morissette’s dry, bright, nimble 2013 Riesling Redfoot Cuvée.

So we already had two former Saskatoon champions on the podium when I announced the winner of the gold. Not the first gold this week for Scott Torgerson of Radisson Hotel Saskatoon and Aroma Resto Bar! He had just returned from the Culinary Olympics in Germany where the Canadian team won gold in both hot and cold cooking. The dish he prepared for us was a beauty in both its looks and its technical finesse. Its protein was a slice of a roulade made with wonderfully tender roasted elk flank and Cactus Lake beef tenderloin, the meats limned in black from a black trumpet mushroom crust. Echoing the mushroom were dots of a porcini-sunchoke foam and three whole Saskatchewan button chanterelles. Petals of a white pearl onion topped a satin-textured parsnip purée and a chicherone-like crisp made from reconstituted beef tendon added crunch. Al of these elements were offset by a dramatic swirl of broccoli purée raked around a quarter of the plate and the finishing touch were two or three fronds of micro-cress. It was a dish that struck us all with its clarity and careful harmonies, and though barely two percentage points separated it from Christopher Hill’s silver, the judges had no hesitation in giving Scott Torgerson the gold. The wine match was another success – a suprsingly delicate Okanagan Zinfandel 2014 from Inniskillin’s Discovery Series that complemented the flavour of the elk very well indeed.

So we have passed the halfway mark with our 2016 campaign – six champions chosen, five more to be found. Coming up next, Calgary and Toronto.