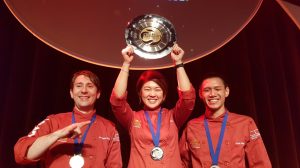 What an evening in Calgary! We knew it might be. Calgary was the first city this year to sell out – there were 700 people in the room, the biggest crowd we’ve ever had there – and we sold more auction trips than ever before. The place was giddy with excitement, whipped up by our Rio athletes and our terrific emcee, Scott Russell. Then the energy ante was taken even higher by the band – Jim Cuddy and Alan Doyle both in fine voice, Anne Lindsay playing incandescent violin and Devin Cuddy and Sam Polley adding their talents to the general merriment.

From a gastronomical point of view, the quality was as high as it has ever been in Calgary – always one of the two or three most interesting food cities I visit for Gold Medal Plates – and dishes ranged from a take on a full brunch to the most refined appetizers. Fortunately, there was an outrageously large amount of culinary talent on our panel of judges, with chef, culinary instructor and television star Michael Allemeier sitting in for John Gilchrist as Senior Judge; writer, traveller, editor and publisher of City Palate, Kathy Richardier; former Canadian Culinary Champion Chef Ryan O’Flynn; 2014 Calgary gold medallist, Chef Dave Bohati; and last year’s gold medal winner, Chef Matthew Batey of The Nash restaurant. 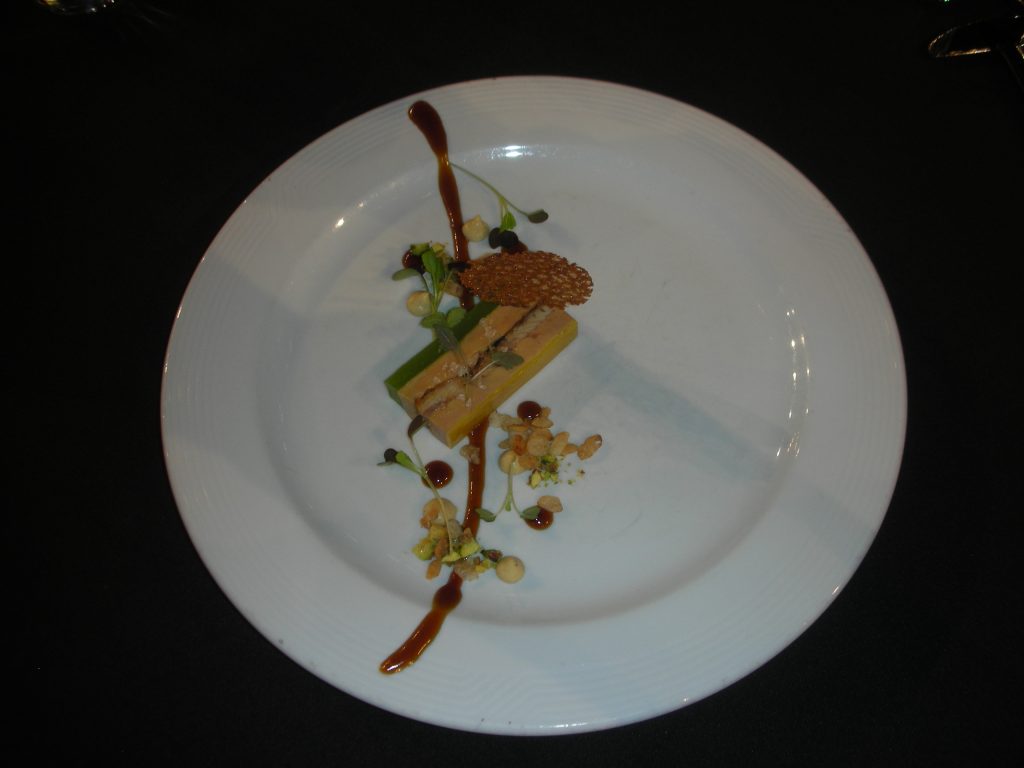 Michel Nop of Redwater Grille won the bronze medal, though some judges felt he deserved the silver. His was an exquisite creation, a slice of foie gras and unagi pressé that he described in detail at the tasting table. The sake-cured foie was first cooked in a bain marie, pressed to release some of its fat, then layered on either side of a stripe of grilled eel that had been dipped in a rich, savoury unagi sauce. Some of the gathered foie fat was used to form a protective surface on the terrine, appearing as the thinnest of yellow lines when it was cut. The bottom layer of the pressé was a green stripe of Granny Smith apple jelly. Meanwhile Chef used the rest of the fat in a brioche dough that he then puréed, piping dots of it here and there as part of the dish. A long stripe of unagi sauce ran up and down the plate while the garnishes were most artfully arranged – two tiny perfect pickled shimiji mushrooms, crumbled pistachio praline, and crunchy grains of puffed Valencia rice. As a finishing touch, Chef baked an ethereal dentelle of a cracker flavoured with duck stock and five spice and stuck it jauntily into his terrine. For a wine, he turned to Nova Scotia and the Benjamin Bridge Nova 7, a sparkling off-dry blend of seven different varieties of Muscat. Fragrant, exotically floral but with a vibrant acidity, it was a great match to the dish. 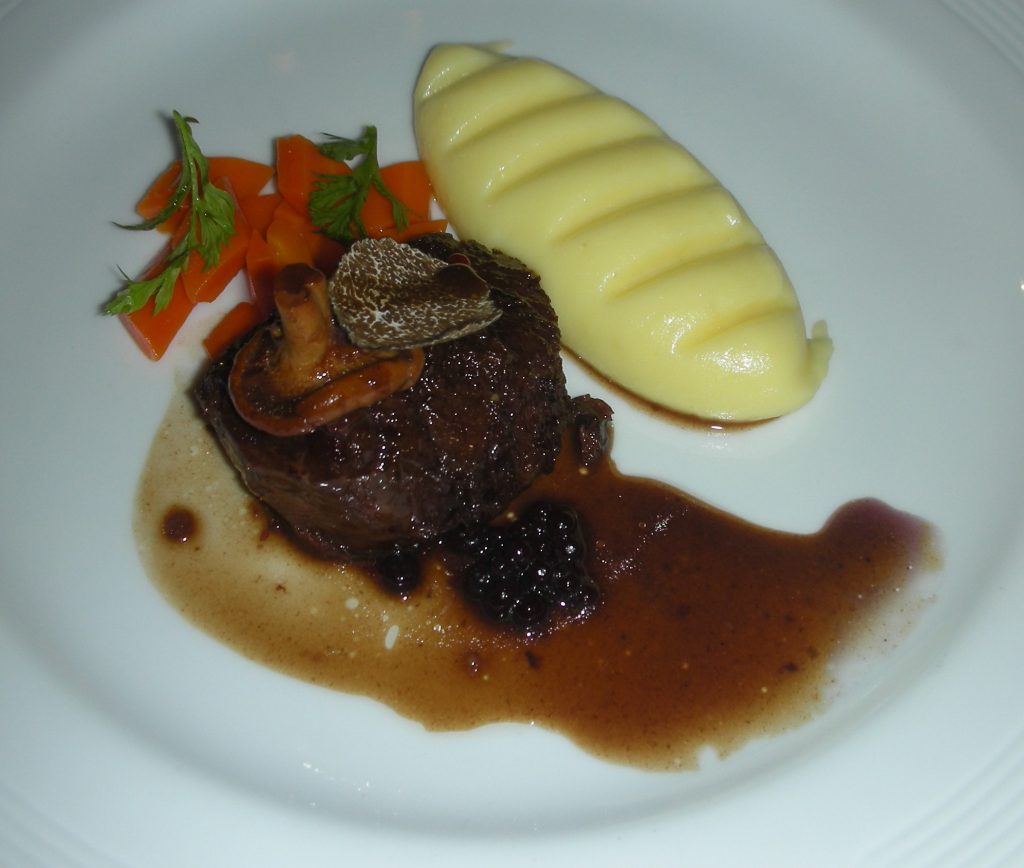 John Michael MacNeil of The Belvedere won the silver medal with a dish in a very different style but which wowed the judges with sheer deliciousness and eatability. He chose to work with Northern Albertan bison cheek, slow-braising the tender, gelatinous meat sous-vide and saucing it with its natural jus. Besides this tasty chunk was an island of buttery puréed fingerling potatoes and a mound of chopped and brined carrots. Tiny soft pearls of blueberry and juniper added a touch of wild flavour to the dish, as did the two elements perched on top of the cheek – a single shaving of Burgundian truffle and a delicious smoked chanterelle. It was a relatively simple, unfussy dish but so nicely achieved and undeniably yummy. Chef’s wine choice was spot on – Mission Hill’s 2014 Reserve Shiraz from the Okanagan.

JinHee Lee of Vintage Chophouse won the gold medal with a dish inspired by her travels in Vietnam and the classic fish preparation called Cha ca la Vong. She began by curing salmon and sablefish in a mixture of salt, sugar, citrus zest, coriander seed, black peppercorns, dill and cilantro. Then the fillets were coated in turmeric butter and rolled into a tight roulade. When sliced it appeared as a gorgeously colourful mosaic, each piece of fish limned with the yellow turmeric. Beside this exquisite disc was a mysterious black sphere that turned out to be a crumbly charcoal taro root beignet filled with a crab mousseline. Specks of golden dill pollen made the beignet look even darker. Winding between these two major elements was a procession of tiny perfect garnishes that added all sorts of colour, texture and flavour contrasts, every one of them designed to work perfectly with the mosaic and the beignet. We found miniature ribbons of cucumber and of mango that had been compressed in kaffir lime syrup; individual cured salmon eggs like jewels, a moment of black sturgeon roe, a saucing of puréed scallion confit; and dots of a piquant anchovy pineapple sauce. Mint leaves, fronds of dill and minute red rings cut from a birdseye chili took the flavours back to Vietnam. Chef’s wine was a careful match that picked up the fruit flavours in the dish with its own tropical notes and lively acidity – the 2014 Gewurztraminer from Bartier Bros. from the Okanagan.

JinHee Lee had won silver before and was a popular winner last night. Nor did it go unnoticed that we now have three women chefs coming to Kelowna next February – and counting – an echo of the brilliant showing Canada’s women athletes produced in Rio. Meanwhile, the campaign continues tonight in Toronto.