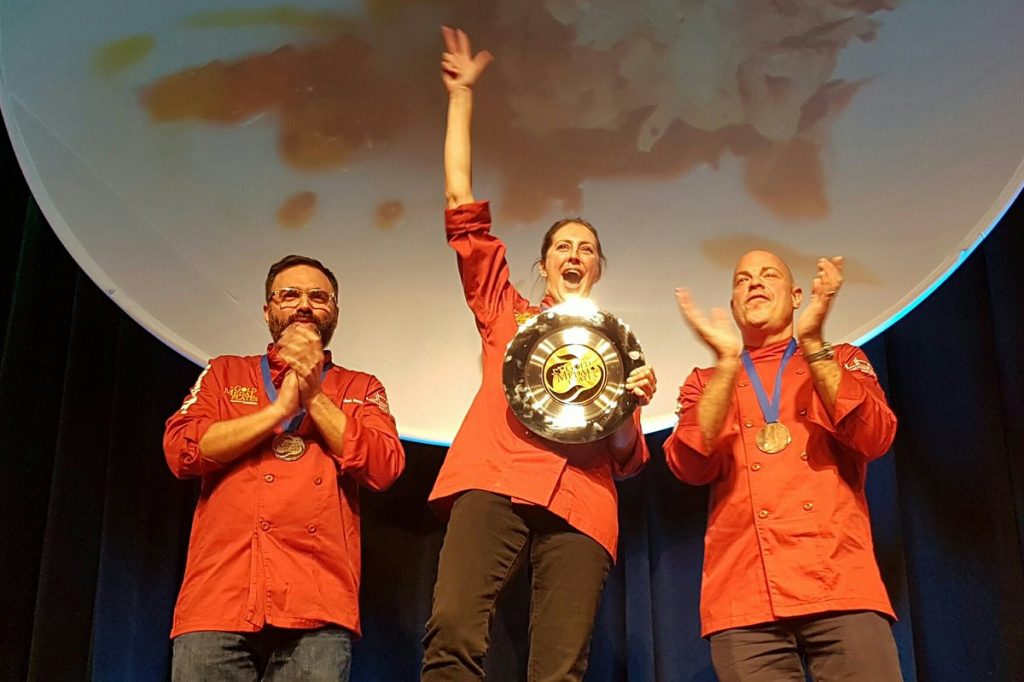 Hurry, hurry home from Calgary – just in time to change our shirts and make it down to the Convention Centre for Toronto’s own Gold Medal Plates event. Could it possibly equal the energy and excitement of our other city galas? The answer was a resounding “Yes!” Here was emcee Scott Russell introducing a regiment of Olympic athletes glittering with precious metals from Rio. There was Anne Lindsay beating the devil on her violin and bringing the audience to its feet, together with the rest of the dream-team band of Jim Cuddy, Alan Doyle, Ed Robertson, Colin Cripps, Sam Polley and Devin Cuddy. And then there was also Patrick McMurray of The Ceili Cottage giving an oyster presentation that had the longest line-up of the night, especially when he was shucking great big Galway flats from Ireland and rinsing out each empty shell with a dram of Irish whiskey, so that not a drop of goodness was lost. 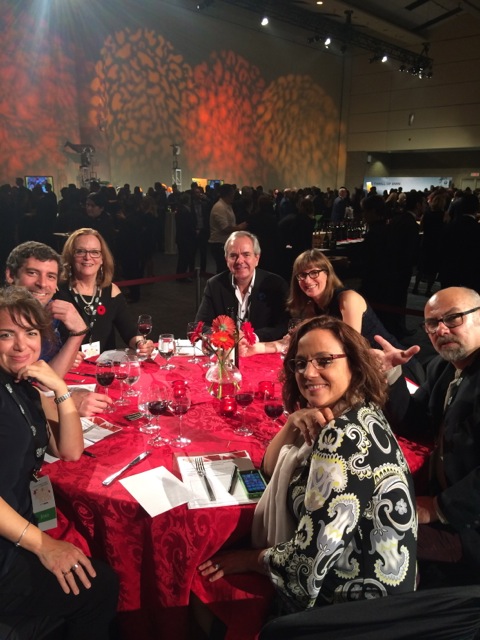 And there were other things to eat in the room… Every chef brought their double-A game, presenting dishes of rare imagination and technical achievement that also tasted scrumptious. The procession of quality that reached the judges’ table was amazing – but the judiciary was up to the challenge, led by our Toronto Senior Judge, writer, editor, food guru and underwater photographer Sasha Chapman; together with Canada’s greatest culinary interpretor, writer and educator, Anita Stewart; chef, entrepreneur and broadcaster Christine Cushing; author, editor and proprietor of the delectable Rosen’s Cinnamon Buns, Amy Rosen; chef, author and culinary legend Chris McDonald; and of course last year’s Toronto Gold Medal Chef, Stuart Cameron of Byblos. 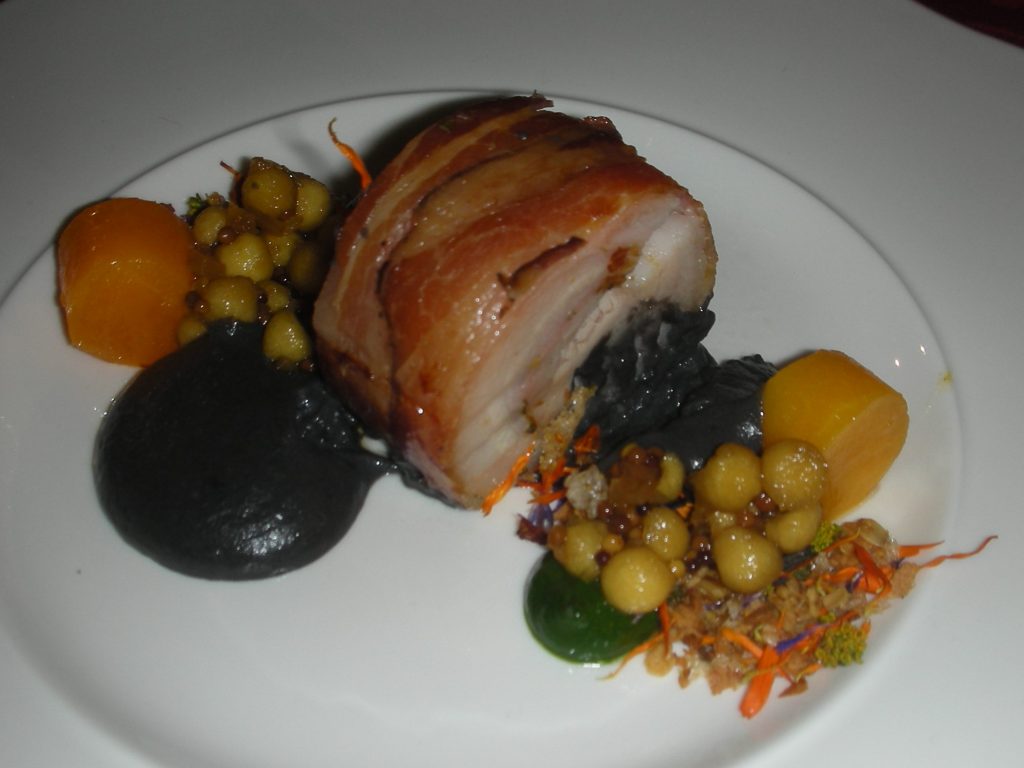 We awarded the bronze medal to Ross Midgley of Ravine Estates Winery Restaurant in Niagara for his “Ravine Surf and Turf.” The protein of the sward was a drum of porchetta – all flavourful lean flesh, juicy, fairly firm fat and an outside edge of crisp bacon. The pig had been raised on whey and brewery by-product and tasted deliciously sweet. The protein of the waters was disguised as a greenish-black mousseline (a colour rarely seen in gastronomy) made of scallops and smoked potato and squid ink and possessed of a subtle benthic flavour. The accoutrements surrounding these elements were a delight. Two little cylinders of tender squash nudged a crumble of oats, pork chicherone fragments, wild flower petals and honey. Apples had been turned into pea-sized spheres and used to make a relish that was perfectly judged as a condiment for the pork – as was an intense herb gelée. They make their own refreshing, bone dry cider at Ravine winery – Lowrey Bros. Hard Cider – and it proved a great match with the pork and apple on the plate.

Our silver medal went to Albert Ponzo of Le Sélect Bistro, though one or two judges placed him at the top of the podium. His dish was visually stunning and offered the most ethereal textures of the evening. He called it “Fogo Island Crab Ravioli” but there was no pasta involved. Moistened with a miso emulsion, the juicy, sapid crab meat lay between two tissue-thin circles of celery root that had been fermented, steamed and finally grilled over charcoal until they were almost translucent. As a sort of essence of marine life – and as a homage to the flavours of Newfoundland – Chef created a gelée of various shellfish, fish and pork. To half of it he added squid ink, giving him two colours to work with on his plate – black and tan in high contrast, juxtaposed in an abstract pattern. Fogo Island shrimp also featured on the plate, but we didn’t see them until Chef explained that they had been tossed in verjus then pulverized into almost microscopic specks and sprinkled over some tender wakame. The taste of that litle mouthful was sensational! Two filaments of potato alumette topped the seaweed while a dot of umame-crazy miso echoed the emulsion from inside the raviolo. The final touch was a touch of green dust on the rim of the plate – powdered phytoplankton from Nova Scotia. Such delicate flavours called for a wine of subtlety and finesse and Chef found the ideal choice in the 2014 Nuit Blanche from Hidden Bench Vineyards and Winery in Niagara, a dry, elegant blend of whites with the emphasis on Sauvignon Blanc. 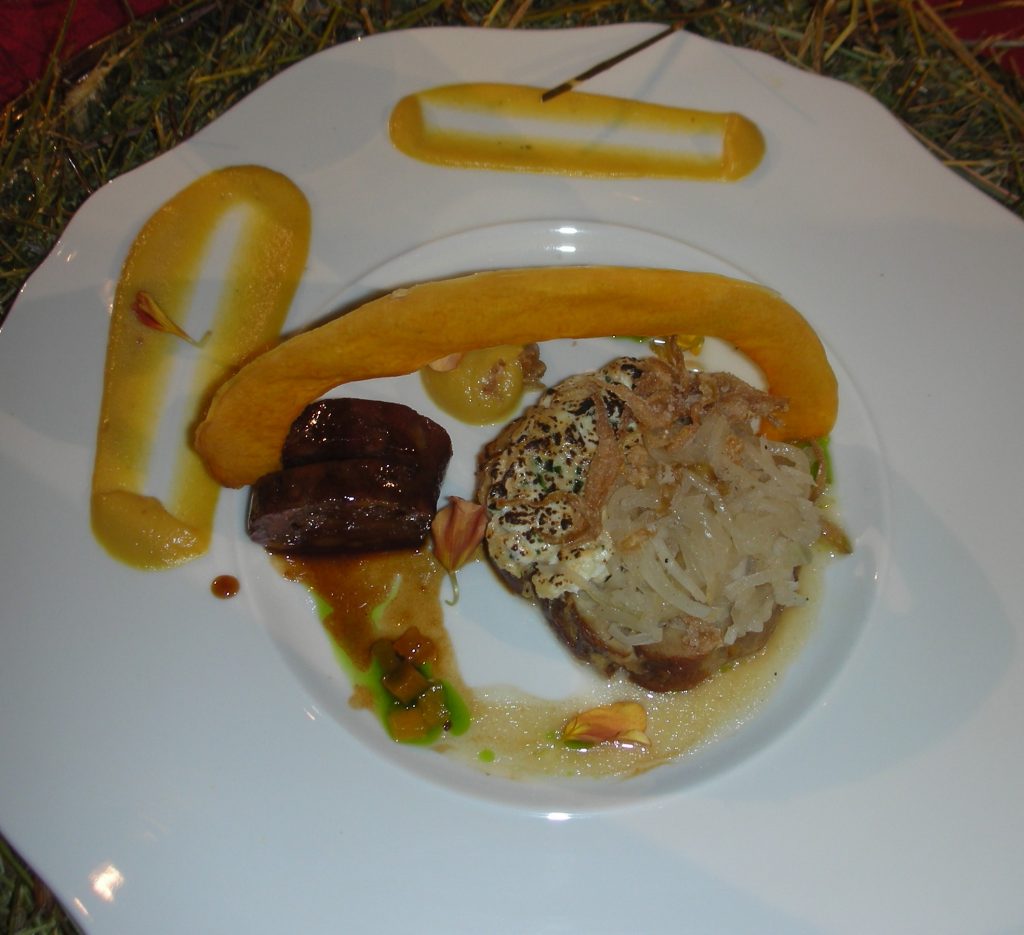 Amanda Ray of O&B Canteen won the gold medal. Her station was strewn with hay, as was the carpet around it, until it all looked like the morning after a barn dance, but there was method in the mess. The scent of hay was a component of her dish, which she described as a homage to her farming family roots. At its heart was a thick slice of St. Canut porcelet from Quebec, a milk-fed sucking piglet that Chef then braised in milk until it was so tender it seemed ready to melt in the mouth. The braising milk separated during the process and Chef gathered the curds, mixed them with lemon and laurel and spooned like a pungent ricotta onto one side of the pork. On the other she set a subtle turnip choucroute, fermeneted for two days with a hint of juniper. Broad stripes of puréed squash that had been smoked with applewood and hay adorned the plate, one of them leading to a couple of slices of a dark sausage made of pork shoulder, red wine and black pepper – as rich as the braised porcelet was refined. As a sauce, we discovered a squash gastrique sharpened with apple cider vinegar and mustardseed, and also a drop of canola oil stained green with bay. Crispy fragments of deep-fried cabbage choucroute were surprisingly pungent and there was more crunch in the form of a long squash tuile arching over the plate. Chef Ray’s wine match was very well judged – the 2014 Adam’s Step Riesling from Cave Spring Cellars on Niagara’s benchlands.

So yes, the dynamic of the year continues! We now have four women chef champions coming to Kelowna in February. Let me bring you up to date. From Montreal, Chef Sophie Tabet of Chez Sophie; from Calgary, Chef JinHee Lee of Vintage Chophouse; from St. John’s, Chef Ruth Wigman of Oppidan; and now Chef Amanda Ray of O&B Canten in Toronto; from Edmonton, Chef Eric Hanson of Prairie Noodle Shop; from Regina, Chef Garrett “Rusty” Thienes of Harvest Eatery and Fresh Market; from Saskatoon, Chef Scott Torgerson of the Radisson Hotel Saskatoon and Aroma Resto Bar; and from Halifax, Chef Mark Gray of Battery Park Beer Bar & Eatery. We have three cities left to visit: Ottawa-Gatineau, Winnipeg and Victoria. Watch this space.