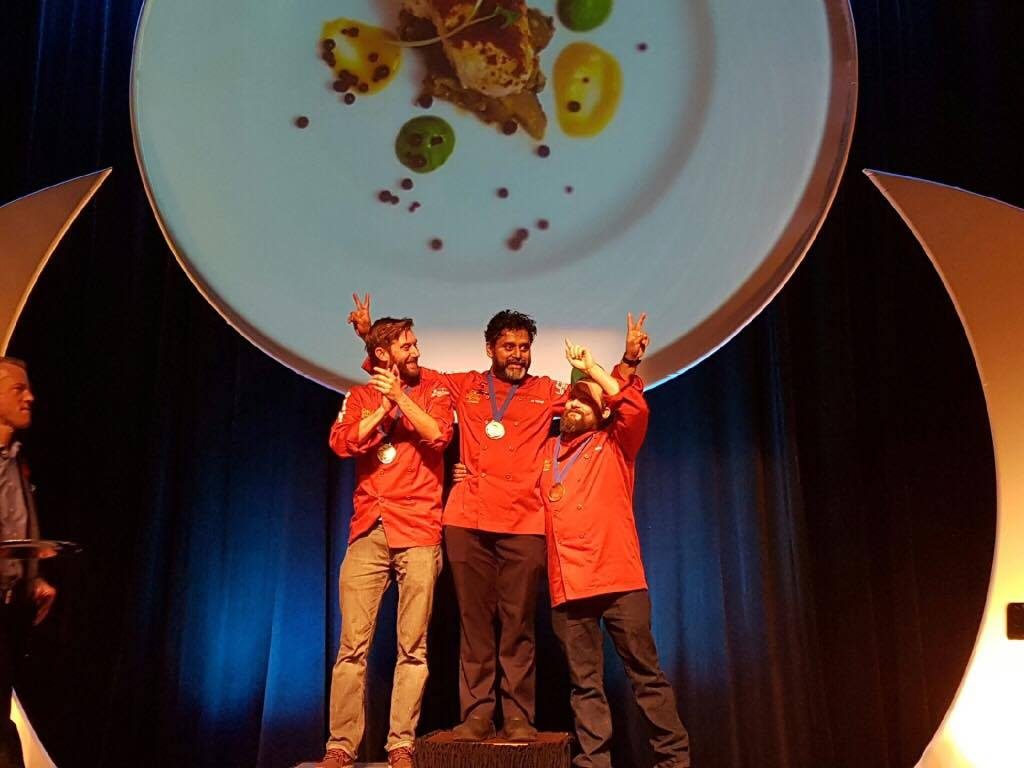 Some deep magic has been hovering over the Gold Medal Plates campaign trail this year, giving us warm autumnal sunshine in every city we visit. Phoebus blazed from a cloudless sky yesterday in Ottawa, dazzling the chefs as they set up their stations in the glass-walled Shaw Centre. It also put a spring in the step of our judging panel, led as always by our Senior Judge for Ottawa-Gatineau, author, editor and restaurant critic, Anne DesBrisay, whose latest book, Ottawa Cooks, is absolutely essential reading for anyone who eats in the Capital region. Judging with us was author, television star and Canadian culinary ambassador, Margaret Dickenson; author, stylist, educator and culinary maven Pam Collacott; industry leader and owner of Thyme and Again Creative Catering, Sheila Whyte; Chairman of the Canadian Culinary Federation and Executive Chef of the House of Commons, Judson Simpson; and of course last year’s gold medal winner, the only human being since the dawn of recorded history to have won the Canadian Culinary Championship twice, Chef Marc Lepine of Atelier.

The event itself was absolutely splendid, with emcee Scott Russell eliciting mesmerising tales from the featured athletes Heather Moyse, Mark Tewksbury, Erica Wiebe, Rosie MacLellan and Evan Dunfee. The sold-out crowd hung on their every word. Need I add that GMP’s band of merry troubadours worked their customary magic: what more can I say about the combined genius of Jim Cuddy, Ed Robertson, Anne Lindsay, Colin Cripps, Devin Cuddy and Sam Polley? The only issue facing GMP at the moment is that the bidding on our auction trips has been so strong across the country that we are in danger of running out! Iron discipline was required last night to save enough for the eager fans in Winnipeg, Victoria and Kelowna.

And the food? No culinary community is more committed to our cause than the chefs of Ottawa-Gatineau, always the most collegial in the country. Last night they were close in marks as well as team spirit. The judges faced some tough decisions and debated for a good hour in the privacy of their lair, looking closely at five of the dishes. At such times, I am grateful to the meticulous scoring system where we each award marks to each dish based on six separate criteria: when the numbers are crunched we can see precisely who crossed the finish line first. 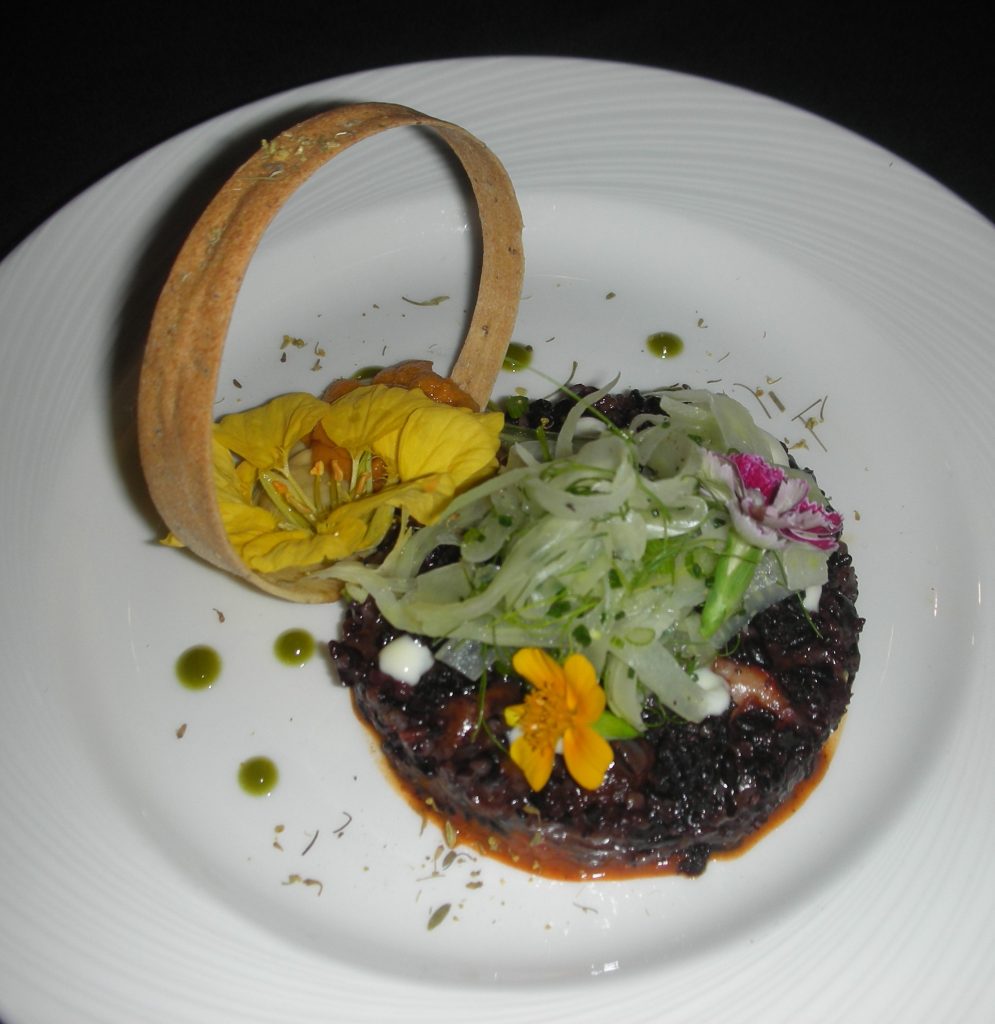 Marc Doiron of town. won the bronze medal. His dish consisted of two principal elements, the first of which had the judges in rare agreement – it was just the sort of thing we would love to eat every night. He called it a “forbidden risotto” and he made it in a traditional way using Forbidden Black rice from China, adding texture with chunks of chorizo sausage, spicy shrimps and the rice’s own crusty pan-scrapings. A puck of this tasty mix was set over a romesco sauce of roasted peppers, hazelnuts and almonds and was crowned with a refreshing, slaw-like salad of fennel and dill and dots of preserved lemon mayonnaise. The second element was an umami-packed sea urchin mousse, topped with raw sea urchin and anchoring a decorative hoop of sambucca fennel tuile. Greend dots of a chive-basil-cilantro fluid gel prettified the plate, as did colourful edible flowers and a final sprinkling of fennel pollen. Big flavours and a very high wow factor! Chef Doiron’s wine was a fascinating coral-coloured 2014 Pinot Gris from Stanners Vineyard In Prince Edward County full of the fragrance of peaches, mandarin and mango. 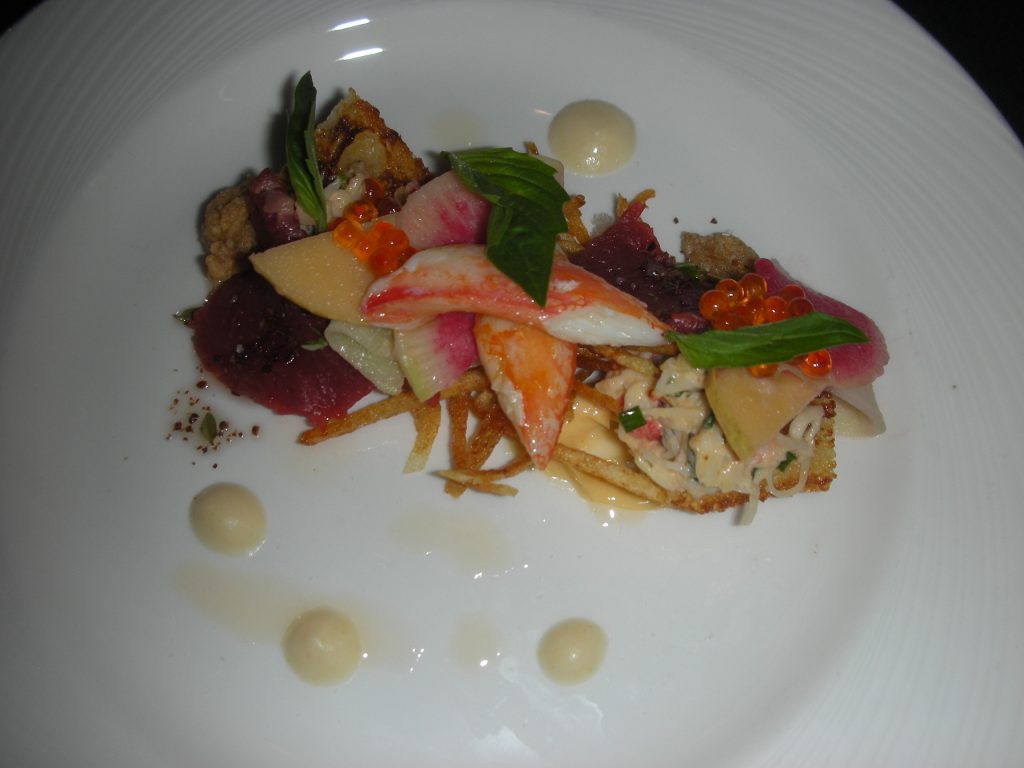 Past champion, Jamie Stunt of Soif bar à vin won the silver medal with one of the most beautiful plates of the evening, an artful jumble of many colourful components where every mouthful brought something new in both texture and taste. On top were perfectly tender pieces of Fogo Island crab, poached in butter, and the rest of the crab was used in a number of ways. Chef turned it into a butter and used it to fry slices of pain au lait that formed the base for the dish; he made it into n aïoli to dot the plate, and into an oil to add rich, fragrant moments of pleasure. Tossed together beneath the crab were crunchy little morsels of deep-fried oyster, thin slices of tartly pickled quince, radish and kohlrabi, and a surprisingly brilliant addition – moments of a silky bison carpaccio that brought a whole new dimension to the dish. With trout roe and fresh basil leaves as a garnish, it proved a delightfully original creation, very well matched to a mature 2009 Brut bubbly from Benjamin Bridge in Nova Scotia’s Gaspereau Valley. The wine’s bracing acidity coped beautifully with the pickles and the saltiness of the plate but had the fruit to flatter the crab.

Our gold medallist won bronze here last year – Joe Thottungal from Coconut Lagoon. His dish was refined, disciplined and at the same time redolent with the deep spice layers of Keralan cuisine. He began with Pacific halibut, marinated overnight in green mango juice, garlic and sea salt then slow-poached in canola oil infused with half a dozen spices. Rather than mask the succulent fish in a sauce, he made a separate fish curry using chili, turmeric, garlic, ginger, smoked black tamarind and coconut milk then dehydrated it into red powdery crumbs. He sprinkled them over the halibut adding amazing nuances of flavour. The fish was set upon a mound of moist aviyal made with six different kinds of mushroom cooked in coconut, cumin, green chili, curry leaves and coconut oil. Several sauces brought yet more aromatic depth. Mustard and asafetida spiked a lentil and ghee emulsion; dots of green purée turned out to be spinach and coriander hariyali. Finally, as a gesture to molecular gastronomy, Chef scattered some purple pearls of a beet and ginger jelly. His wine match was one of the highlights of the evening – a beautifully balanced off-dry 2015 Riesling from Huff Estates in Prince Edward County, made with Niagara fruit.

So it was a close race but we have a very worthy winner in Chef Thottungal. I look forward very much to seeing how he performs in Kelowna, come February. Next up, Wednesday in Winnipeg!