Say it ain’t so! Was this really the last event of the Gold Medal Plates 2016 campaign? It has been an intense few weeks but the fun and excitement of finding our gold-medal winners across the country is intoxicating. It’s also pretty cool to hobnob with Olympic athletes, iconic musicians, captains of industry, and a spectacular group of judges across the country – the renowned chefs, chef-instructors, educators, food writers, restaurant critics and gastronomes who collectively make up the Gold Medal Plates culinary judiciary. No other network of food professionals spans Canada the way we do and I am continually amazed and honoured by the dedication these people – volunteers all – show to GMP. Last night in Victoria the judges were led by our joint Chiefs of staff for British Columbia, Senior Judge Sid Cross – one of Canada’s great authorities on food and wine – and Senior Judge Andrew Morrison, author, critic and editor-in-chief of Scout Magazine. With us were Sooke Harbour House hotelier, restaurateur and recipient of the Nation’s Table Governor General’s award, Dr. Sinclair Philip, sommelier, chef, writer and founder of EAT magazine, Gary Hynes, and of course last year’s gold medal-wining chef, Alex Chen of Boulevard Kitchen & Oyster Bar in Vancouver.

It is in the nature of a GMP event that the culinary judges, their tasting done, retire to a private place to deliberate, crunch scores and decide the evening’s champions. So we miss the first part of the second part of the evening – the parade of athletes, the interview portion where our dazzling emcee, Scott Russell, coaxes anecdotes and Olympic memories from the chosen few. The inspiration they generate in our guests is palpable, however, when we finally rejoin the party – a buzz of hero-worship and Canadian pride. Then the musicians come on to whip up a frenzy. Last night, the talent was the best of the west – Barney Bentall with his son Dustin Bentall, Geoffrey Kelly and Matthew Harder of Spirit of the West, Daniel Lapp on trumpet and fiddle with the addition of Ontario’s own electrifying Anne Lindsay on violin. They tucked a tribute to Leonard Cohen into their final set and had the crowd dancing in the aisles. 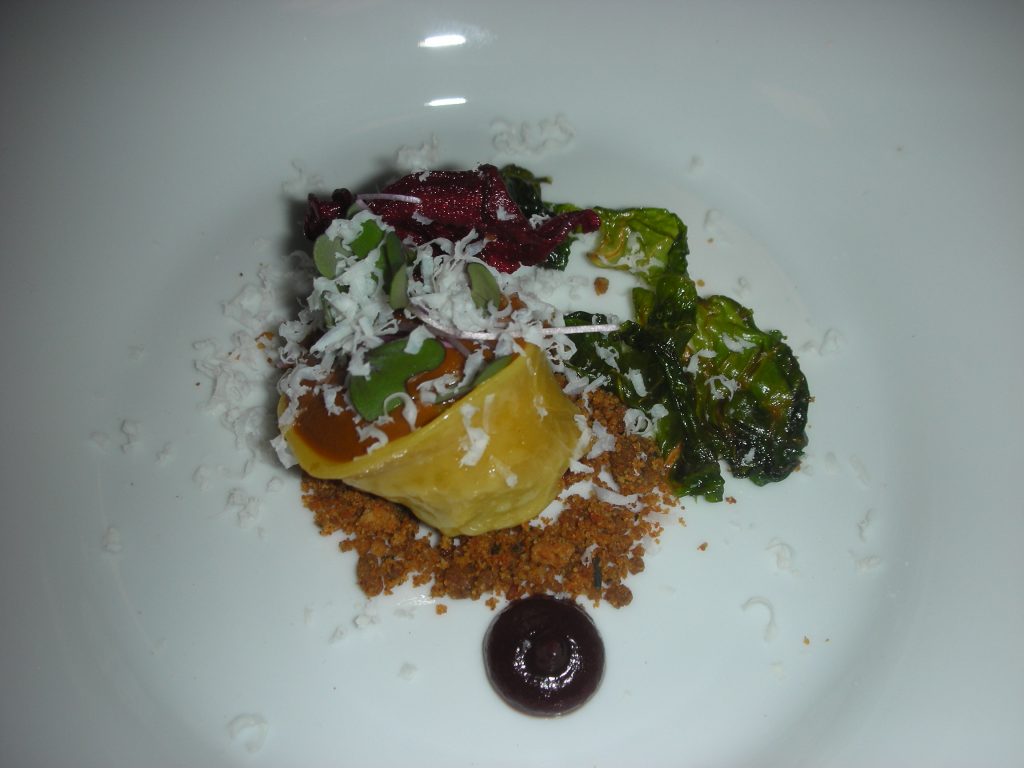 By then the medal-winning chefs were on stage, standing on their podium. We awarded the bronze medal to Ricardo Valverde of Ancora, in Vancouver. His dish was centred around a “tortellini” that really looked more like half a canneloni rising like a tomtom from the plate. It had a pasta skin of exemplary tenderness that held a filling of rich, moist forked duck confit topped with an elegant sauce – an aji panca mole with a layered, smoky chili seasoning that was more Peruvian than Mexican. Tiny seedlings and a crispy beet chip sat on top. Beside the little tower lay crisply fried Brussels sprout petals and a neat dab of a second sauce – a dark purple purée of red onion marmalade. A delicious crumble of crisp duck skin and toasted almonds finished the plating though Chef had one last ingredient to apply, grating a little pressed queso fresco over the dishes that had been set before the judges. There was plenty of textural variety and intriguing flavour to the dish and the wine match worked well with the duck – the 2014 “Black Swift Vineyards” Pinot Noir from a winery called the hatch, in East Kelowna. 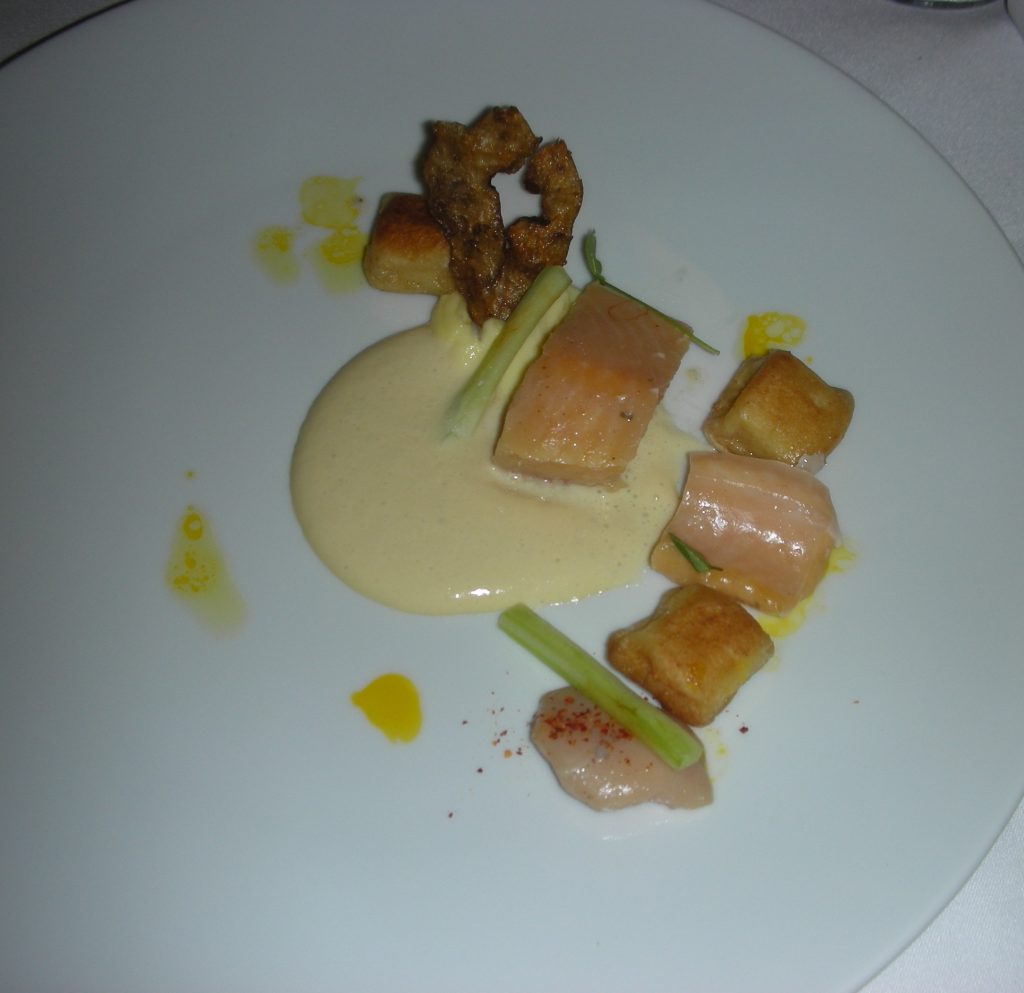 It happens a lot at Gold Medal Plates that the final marks awarded to two dishes are amazingly close. That was certainly the case with our silver and gold winners in Victoria. Indeed several judges scored the silver dish higher than the gold. In the end, Mark Filatow of Waterfront Wines, in Kelowna, took the silver. His chosen protein was the fine farmed arctic char from Road 17 in Oliver. He worked with three distinctively textured cuts – the loin, the belly and the cheek – lightly curing and lightly smoking them then poaching them in a warm olive oil perfumed with saffron and toasted fenugreek seeds. Sharing the plate were three perfect gnocchi made by mixing toasted and ground corn polenta with Parisian gnocchi dough and finished at the last minute in brown butter to add a bronzed and crispy surface. At the centre of the plate was a pool of smoothly puréed sunchokes enriched with egg yolk, shallots and white wine. A deep-fried sunchoke crisp was one garnish; another was a pair of crunchy green wands cut from the stalks of poached collard greens. A scruple of paprika dusted the char cheek and Chef added a dab of a custard made by cooking down some of the brie-like formagella cheese made by Bella Stella in the Okanagan. The plate was dotted with some more of the oil in which the fish had been cooked. Getting those three textures of char so right and pulling off the ambitious plan of cooking gnocchi for the multitude took this dish to the podium; so did Chef’s wine choice, beautifully bridged by the fragrant olive oil – the bright, tangy 2014 Chardonnay from Tantalus Vineyards in South East Kelowna. 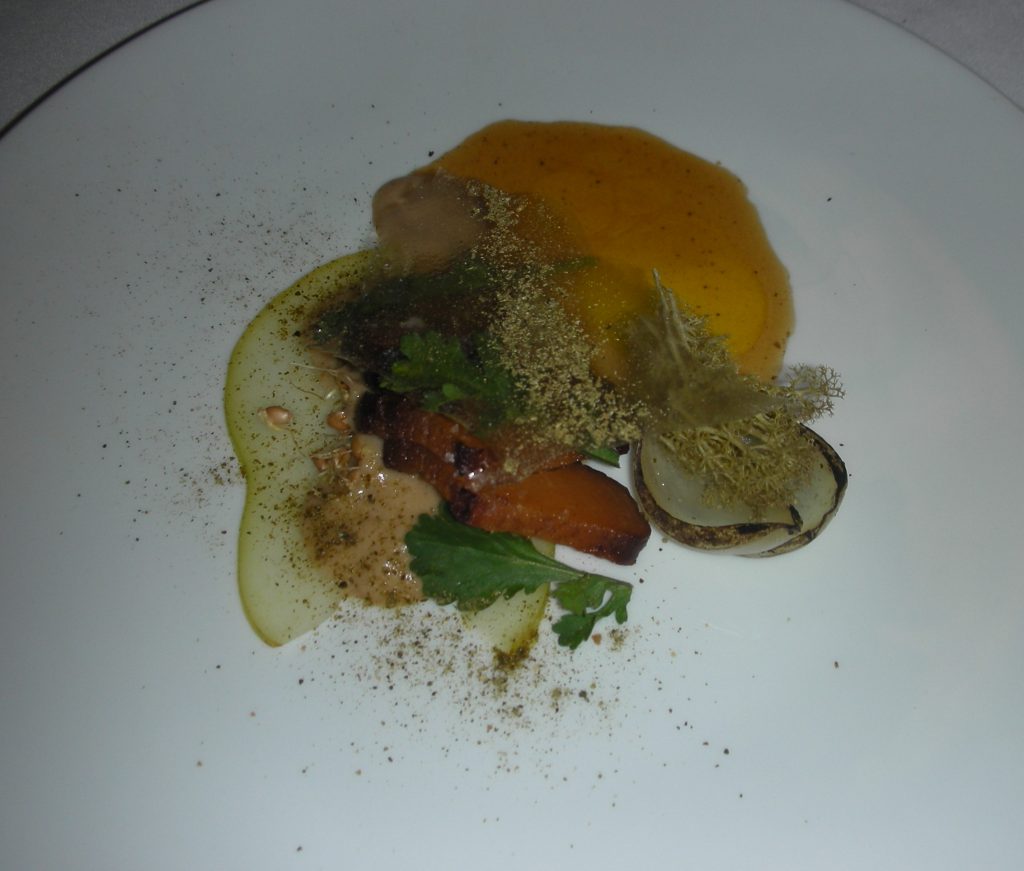 Jesse McCleery of Pilgrimme on Galiano Island won the gold medal with a vegetarian dish of great imagination and delicious flavours. Its star was the humble rutabaga (better known as a swede in England). Chef explained the ordeal to which the root is subjected – first encased in hay and slowly baked, then smoked for several hours, vacuum-cooked overnight with fresh pear juice and Galiano kelp to impart umami, and finally quartered and dehydrated and caramelized to produce a meat-like consistency. I found the texture more like tuna and the three thick slices on my plate were mighty delicious. Beneath them were some tissue-thin slices of fresh pear that had been compressed in a kelp dashi. These were topped with a rich soubise of fermented Walla Walla onion puréed with wild yeast red fife sourdough bread and scattered with some red fife grains. A “jus” to go with the meatlike rutabaga was made with pear juice, caramelized onion, fresh kelp and dried fruits. As further evidence of his technical skill, Chef made a translucent crisp of fermented onion juice and sprinkled it with a crumble of reindeer lichen and bull kelp. A frond of the lichen, some crunchy petals of charred white onion and two oxe-eye daisy leaves finished the dish. All in all, the many-faceted interaction of onion, pear and kelp played brilliantly with the sweet, rooty rutabaga – and also with the wine, a delightful, dry Pinot Noir rosé called 2015 Blanc de Noir from Sea Star Estate Farm and Vineyards on Pender Island that had the fruit and acidity to enhance as well as complement the dish.

So there we have it – our last gold medallist found, the roster set for the Canadian Culinary Championship next February in Kelowna. It is going to be a mighty contest! Find out all about it at goldmedalplates.com.