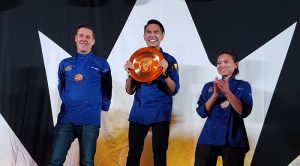 A beautiful day in Regina, coming into town on that short ride from the airport – not a whisper of a breeze to stir the naked, leafless trees, and the prairie sun shining in a cloudless blue sky… Okay, it was nippy – minus 10 – but our welcome at the Delta Regina Marriott was as warm as could be imagined. And the GMP gala evening in the hotel’s convention centre was a total blast! Olympic gold-medallist Erica Wiebe was our witty and delightful MC (the entire crowd hanging on her every word). Music was the gift of a super-talented quartet made up of rock icon Neil Osborne from 54/40, the inimitable Barney Bentall, the ebullient Sam Polley, and violinist extraordinaire Anne Lindsay who, as ever, raised energy levels in the great salon right through the roof.

By the time the band came on to play, the judges’ work was done, thanks to the focus and expertise of our excellent Regina panel. CJ Katz, author, photographer, broadcaster and journalist, is our Senior Judge here and she and I shared the table with Trent Brears, Executive Chef of the Regina Legislature and captain of the Saskatchewan Culinary Team at the 2000 Culinary Olympics in Germany; with chef and educator Thomas Rush; with writer, blogger, restaurant columnist and television producer Aidan Morgan; and of course with last year’s gold medallist, Chef Garrett “Rusty” Thienes of Harvest Eatery and Fresh Market in Shaunavon. This eminent crew had its work cut out. We all agreed on our gold and silver winners but bronze was another matter. I don’t usually mention who comes fourth in our competition but this time three chefs were involved in a photo finish and we had to work through each of the judging criteria (taste, technique, visual presentation, texture, wine compatibility and wow factor) repeatedly to find our bronze medallist. So, disappointment for Chef Curtis Toth of the Hotel Saskatchewan and for Chef Jssel Hysuik of Sprout Catering & Café… 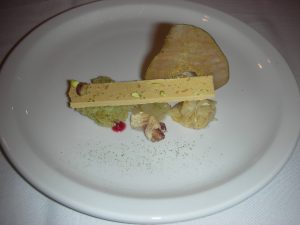 But joy for Louise Lu of Skye Café & Btsro as we hung the medal around her neck. So many of the dishes last night were ravishingly beautiful to look at and Chef Lu’s was a stunner. Her main component was a stiff, very slim, rectangular slice of foie gras that she had first cured, puréed and pressed. As firm and slick as cold butter, with a dusting of crumbled pistachios to add texture, it lay across three components like a pirate’s gangplank. The first was a bite-sized purse of ethereal phyllo pastry filled with a sweet pear chutney spiked with the merest hint of Szechuan peppercorn. Beside that was a very different treatment of pear – a brunoise, lightly pickled and flavoured with ginger. The third component was a sponge-like brioche flavoured and coloured with pistachio and sprayed with an invisible spritz of pear and Riesling. There were other garnishes – more pistachios for crunch, a modest dusting of green macha powder, one or two cranberry pearls, and, soaring skywards, a perfect, tissue-thin pear crisp. The harmonies between the pear and pistachio components were impeccable; the way they balanced the richness of the foie gras beautifully judged. And the wine match was a doozey – the amazing CSV 2015 Riesling from Cave Spring Cellars in Niagara, a wine of the most elegant minerality and delicate intensity that also worked perfectly to balance the foie. 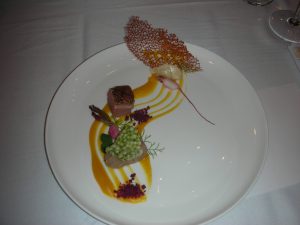 We awarded the silver medal to Chef Joel Williams of The Capitol Restaurant & Cocktail Bar who offered duck three ways. First he decorated the plate with five lines of butternut squash purée that bent this way and that from rim to rim. Along this winding highway we found the three ducky elements, starting with a mound of moist, fatty rillettes made from the confited duck breast and further enriched with a touch of pork shoulder. Almost as smooth as a paté, it was enhanced by a trace of sherry and topped with an ingenious bubbly wafer made of tapioca pearls and arugula juice that had the crisp, aerated texture of a shrimp cracker. Passing an excavation of savoury beet soil, we came to the second component – a cube of delicious applewood-smoked duck breast cooked sous-vide and paired with a miniature turnip lightly pickled with rosemary and Merlot. At the end of the road lay a spoonful of foie gras mousse with the texture of whipped butter. Nudged by another pickled turnip it was crowned with a lacy “coral” of beet tuile. Flavours were vivid and textures very well achieved all the way along, and the judges enjoyed the wine pairing – the lightly tannic, vibrant 2014 Pinot Noir from Robin Ridge in the Similkameen valley.

David Vinoya of Wild Sage Kitchen & Bar won gold. He called his sensationally beautiful dish The Nest and it turned out to be a most imaginative play on a theme of chicken. He began by creating an abstract circular pattern of emerald green watercress fluid gel that had a fleetingly sweet, herbal flavour. Powdered black olive added interesting saltiness to a mound of beetroot soil that was edged by two tiny areas of very rich, chilled chicken liver mousse. Into each of these Chef stuck a fragile little fin of chicken tuile, made by roasting and puréeing chicken, adding flour and isomalt and then dehydrating it into a crisp. Wee leaves of red-veined sorrel and star-like edible yellow flowers prettified the creation but the main event was a pale sphere, like an egg, rising mysteriously from the soil. And egg it was… Chef had cured eggs in the manner of the Philippines by soaking them in mud and salt for 30 days; then he turned the yolks into a firm, super-smooth ice cream. You might expect a touch of umami in the flavour of eggs treated this way but the final taste was of rich, custardy yolk and an almost caramel-like sweetness. Chef finished the dish by holding a catkin over the plate and tapping it so that the pollen fell like fine dust onto the egg. “It’s quite flavourless,” he explained, “but packed with nutrients and minerals, so this dish is good for you as well as delicious.” The chosen wine worked really well with the subtle, pervasive sweetness of the dish – a bubbly for which I have a particularly soft spot, and which has taken other chefs to gold in the past – Benjamin Bridge’s exotic, Muscat-scented Nova 7 sparkling wine from Nova Scotia.

So we have our second champion! The roster for the Championships in Kelowna is starting to form. Next stop is Montreal on Tuesday, then off we go to Halifax and St. John’s.