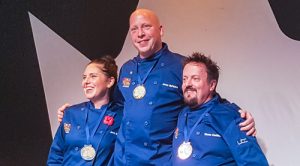 Yet more sunshine on our extended road trip, glinting off the broad South Saskatchewan river in the early afternoon as I summoned my appetite with a good long walk. This part of the city – all parkland and elegant bridges of honey-coloured stone – is as lovely as any urban scene in the entire prairies. Especially when one has a party to go to later. The Gold Medal Plates gala that evening was a doozey, the best yet, put through its paces most energetically by our dazzling MC, Olympic soccer star Melissa Tancredi. Bidding on the GMP trips went through the roof and the music was excellent – the great Jim Cuddy and his sons Devin Cuddy and Sam Polley, accompanied by the luminously brilliant Anne Lindsay, bringing the crowd to its feet time and again. Even some chefs were said to have been rocking away, though they had had a busy evening. And a most successful one, according to the culinary judges on my panel, led by our Senior Judge for Saskatoon, writer, caterer and dining columnist for Planet S magazine, leader of Slow Food Saskatoon, Noelle Chorney; together with poet, author, restaurateur and co-founder of Slow Food Saskatoon, dee Hobsbawn-Smith; chef and culinary instructor Michael Beaulé; chef and past competitor with Gold Medal Plates, Dan Walker; author, blogger, journalist and pastry chef, Renee Kohlman; and last year’s gold-medal-winning chef, Scott Torgerson of the Radisson Hotel Saskatoon and Aroma Resto Bar.

Frequent Saskatoon champion Darren Craddock of the Delta Bessborough hotel won the bronze medal. He chose to work with gorgeous prairie lamb, marinating the firm, flavourful belly with mint, garlic and parsley, slow-cooking it sous-vide for 12 hours then searing it off; a dusting of fennel pollen brought out its savoury flavour perfectly. He also offered lamb sweetbreads, impeccably prepped and crisply fried at his station with a crust of dried, powdered corn. Two purées painted the plate – one being dots of tangy, emerald-coloured sorrel, the other a broad bed of parsley root soubise – both delicious. Puffed sorghum gave crispness to the creation; so did a scattering of crushed hazelnuts and cocoa nibs. Dots of a very intense sour cherry and anise gel woke up the judges’ palates and found an open road into the heart of the wine – as did the cocoa and anise. The wine in question? Closson Chase’s K. J. Watson vineyard 2015 Pinot Noir from Prince Edward County.

Chef Jenni Schrenk of Chef Jenni Cuisine won the silver medal. Her dish was a memento of her wedding day in June 2016, held in Germany’s Black Forest at St. Johann’s church, which stands beside a wishing well said to be the source of the Danube. It was a fascinating and courageous vegetarian plate, with most elements curling elegantly around the rim of the bowl, skirting three colourful dots – one of turquoise coloured blue-green algae and wild mushroom foam, representing that wishing well, another of julienned squash with a lightly curried dressing, the third a pear “penny candy” stamped with a birch leaf. The dish had two principal components – a drift of superlatively tender little spätzle, dusted with cattail pollen, and a mound of firm Swabian-style green lentils subtly seasoned to match Chef’s beverage with juniper, thyme, ginger and clove. Crunchy little white garnishes turned out to be cattail hearts pickled in the honey ginger liqueur that was another part of Chef’s cocktail. A micro-salad of mostly mustard and radish sprouts lead to the final flourish, a tissue-thin Emmental crisp decorated with chokecherry vinaigrette pearls. All Chef Jenni’s ingredients were locally harvested over the last week and her drink was a beauty – a fresh, foamy cocktail made with Local Black Fox #3 gin and the same company’s honey and ginger liqueur.

We awarded the gold medal to Chef James McFarland of the University of Saskatchewan. His delectable protein was a tenderloin of bison, cured in espresso coffee and cooked sous vide for just the right amount of time. The meat was marvellously tender and flavourful and its texture had more integrity than most meats prepared in a bag. On top of the slices of meat was more bison – the flank, shredded, crisped and infused with birch. It had a powerful woodsy, ashy flavour that contrasted beautifully with the moist tenderloin. The accompaniments were more like condiments than sides – dots of french onion essence enriched with comté cheese; tangy petals of pickled pearl onion; a smoked corn pyrée and a dusting of smoked corn powder. Black currant appeared as a tart gastrique and an ethereal coral tuile. It all looked splendid and tasted delicious, especially when one piled several elements onto the fork. The wine Chef chose was superb and so was its relationship to the dish, bringing coffee and black currant notes into play – the 2013 Grand Vin from Osoyoos LaRose in the Okanagan.

Huge congratulations to all the chefs who comepeted in Saskatoon and especially to Chef McFarland. We will see him in Kelowna, and I can’t wait to taste his food again. Next up: Wednesday in Winnipeg, Thursday in Calgary