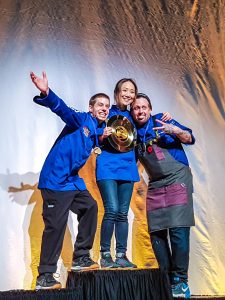 We were promised snow in Ottawa, penultimate stop on the Gold Medal Plates marathon, but though the weather was bitterly cold and blustrous the sky was delightfully blue. At least, it was this morning as we all awoke to memories of last night’s triumphant gala in the glamorous Shaw Centre. Isabelle Charest was our brilliant MC and Sylvie Bigras led the Olympians’ question-and-answer on stage, the sold-out audience of 600 guests hanging on every funny, charming, inspirational word from Farah Jacques (athletics, Rio 2016), Erica Wiebe (wrestling gold medallist, Rio 2016) and Ashleigh McIvor – (skicross gold medallist Skicross, Vancouver 2010). Did I mention the band? They rocked the house led by Neil Osborne of 54-40, Jeremy Fisher, Devin Cuddy, Sam Polley and, making her GMP debut, singer-songwriter Kandle Osborne.

It has been eleven years since I first sat down beside author, editor and restaurant critic Anne DesBrisay to judge Gold Medal Plates, and it’s always a highlight of my year to see her again. With us last night was local industry leader and owner of Thyme and Again Creative Catering, Sheila Whyte; Chairman of the Canadian Culinary Federation and executive chef of the House of Commons, Judson Simpson CMC; the only chef in history to be named Canadian Culinary Champion twice, Chef Marc Lepine of Atelier; publisher, food writer and culinary historian, Dr. Janet Boileau; and last year’s gold-medal-winning chef, Joe Thottungal of Coconut Lagoon. We had a fine old time tasting a broad range of highly original, very Canadian dishes that started with seal and ended with elk osso bucco. There was so much sea urchin in the room I fear for the species. 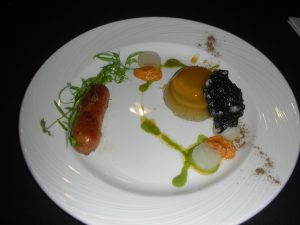 It was certainly front and centre – and everywhere else – on our bronze-medal-winning dish from Steven Harris of two six {ate} restaurant. On one side of his plate we found a glistening sausage that Chef described as an urchin hot dog, made of juicy, finely ground pork belly infused with urchin. On the other side was a dome of aspic made from a kelp and mushroom dashi. Chef had dried urchin to resemble bonito and then shaved flakes into his broth before turning it to jelly. He had also used the same ingredients to create a pungent powder which he sprinkled across the rim of the plate. Hidden inside the aspic was a runny urchin cream with a gloriously intense flavour that was off the charts in terms of umami. Two moments of actual raw urchin reminded us of the source of all this deliciousness. As a vegetable component, Chef proposed smal white drums of pickled kohlrabi while a green squiggle of sprouted wheat emulsion was mirrored with a drizzle of sweet whey-fermented ground cherry molasses. Fresh tarragon was a fragrant flourish beside the sausage and the requisite crunch came from a delicate tapioca crisp dyed black with squid ink. “Sea urchin always reminds me of foie gras,” Chef Harris told us, a parallel that led him towards his wine, the bright, off-dry 2016 “Embrace” Riesling from Casa Dea Winery in Prince Edward County. 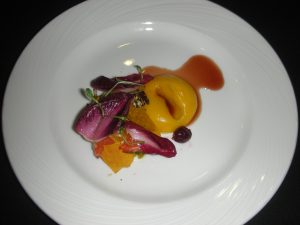 Our silver medal went to Chef Yannick La Salle of Restaurant Les Fougères in Chelsea, Quebec. His central protein was wild arctic char from Nunavut, cured very briefly in salt, rinsed and then cooked sous vide with lemon oil for 15 minutes at just 43o until the flesh was soft but still possessed of its fresh, glistening colour. A host of miniature elements were crowded on top of the small piece of char including toasted sesame seeds and puffed wild rice for crunch and two of three distinct treatrments of buternut squash – a brunoise of the vegetable roasted with brown butter and crisp, tissue-thin shards of a dehydrated squash “paper” that had first been brushed with maple and ginger. The third squash element was a stunning purée enhanced by brown butter, maple syrup and a splash of oloroso sherry to bring out its natural sweetness. For a moment of savoury bitterness, Chef pickled red endive leaves and laid them like petals on top of the other garnishes. Two or three scarlet cranberries finished the dish, their tartness mitigated by more maple syrup, their flavour concentrated by gentle dehydration. They were dressed with a vinaigrette “dissocié” made with reduced cranberry juice, squash oil, maple and ginger that spilled out onto the plate from a dimple pressed into the surface of the squash purée. It was a dish that surrounded the fish with rich, bold autumnal flavours, all of which were contrasted by a very precisely focused, complex wine, the 2015 unfiltered Chardonnay that Norman Hardie Winery produced from fruit grown on Niagara’s Beamsville Bench. 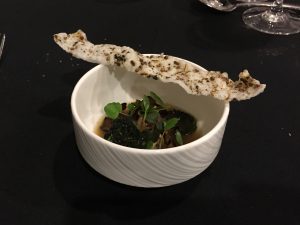 It’s a bold chef who decides to offer a vegan dish at a Gold Medal Plates competition, though we have awarded two silvers to vegan creations in other years in Ottawa. Last night a vegan dish won gold, the work of Briana Kim, chef-owner of Café My House. In her written description of the dish, she described its principal component as “steak” but in fact it turned out to be mushroom. Chef Kim had made a dense cake of chopped miso-marinated crimini mushrooms and set two or three little cubes of it into her bowl. She added some whole smoked mushrooms, leaves of chared cabbage the size of large postage stamps, petals of pearl onion, and sweet, crunchy balls of Asian pear. A short length of blistered shishito pepper, some dots of citrus honey and a touch of shiso added attendant flavours, all brought together by a piping hot broth scented with Kombu and charred onion that Chef poured into the bowl. Micro greens added bright colour and resting across the bowl was a long crisp made from rice studded with fennel and coriander. Her choice of beverage (on a night when the chefs had already paired up with cider, sour beer, even sourer beer and a rye whisky cocktail as well as with wine) was the delightful, fruity, forthright Izumi of the North Junmai Genshu sake from the Ontario Spring Water Sake Company in Toronto – a wonderful match.

Huge kudos to Chef Kim who will be competing for the Championship in Kelowna in February. I can’t wait to taste more of her food. And now only one last evening remains – our Toronto event, next Thursday.