It has happened before – I fly in to Montreal for the great culinary drive-around that will find us our champion chef, and voila! The chilly, wet autumnal weather whimsically decides to revert to its July mode – gorgeous sunshine and balmy temperatures for a single improbable day, the streets full of citizens smiling like happy children at nature’s gracious gift. We judges ended our evening long after dark, sitting outside on a café patio in our shirtsleeves, discussing the treats we had just experienced – we being Robert Beauchemin, the food and restaurant writer, anthropologist and Senior Judge for Montreal; food journalist and critic Gildas Meneu; cookbook author, teacher and broadcaster Lilly Nguyen; and yt.

We visited five restaurants and tasted five dishes, and while each one was remarkable and delicious, our final decision was gratifyingly unanimous. We awarded the bronze medal to Chef David Ollu of Hélicoptère. He gave us a dainty puck of black pudding, moist and soft inside a natural crust from a very hot pan. It was rich and not overly spiced, but not as rich as the purée of salsify and brown butter that lay beneath it. Small wands of roasted salsify were tucked in around it while crunchy salsify ribbons completed the subtle root’s trifecta and gave a pleasing textural contrast to all the soft textures. Strewn over the boudin we found tissue-thin slices of Quebec pine mushroom and raw Japanese turnip, forming a delicate white jumble of autumnal flavours. Green sunflower shoots added a fresh touch as did a smooth crabapple purée. Chef Ollu’s wine was a really fine match, echoing the tang of the crabapple and cutting the richness of the boudin noir and the black butter in the purée. It was a natural wine made from biodynamically grown Quebec Pinot Noir – the Domaine Nival 2017 “Les Entêtés,” a name which means “hard-headed.” Fruit-forward after nine months ageing in old oak, and with a slight spritz when first poured, it wasn’t too funky at all, the flavour an intriguing blend of red berries and cider apple. 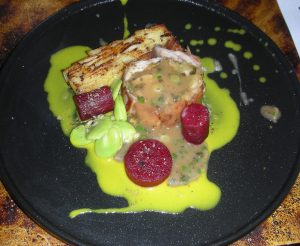 Chef Philippe Tees of Asado (until last week the restaurant was called HVOR) won the silver medal with a dish full of robust flavours. At its heart stood a drum-shaped portion of a roulade made from tender, sapid rabbit saddle and a loose farce of mushrooms, apple, sage and foccacia. It was wrapped in a delicate prosciutto that Chef had cured himself using koji. Cylinders of purple beet had a perfect texture, on the cusp of cooked and raw, and a woodsy flavour from time spent in a cloud of applewood smoke. Seasoned cream and a little duck fat enriched a yummy pressed potato gratin, set beside half a dozen fava beans, compressed with olive oil and sea buckthorn that lent the beans an exotically fruity sharpness. I have never heard the term “Jiggs dinner” uttered in Quebec but chef is married to a Newfoundlander and has spent much time cooking there. So he borrowed from the Atlantic tradition and spiked a sauce for his rabbit with chopped mustard pickles and their juice. A second sauce was a more conventional jus made from the rabbit bones. The wine Chef chose tasted remarkably like a cool-climate Chardonnay but turned out to be made from a hybrid variety called Saint Pepin, grown and vinified by Coteau Rougemont in Quebec. It had seen a little oak, which made a great bridge to the smoky beets, and had a charming acidity and minerality which balanced the dish beautifully.

Our gold medal was thoroughly deserved by a chef who has competed twice before while at his other restaurant, Le Fantôme. These days Jason Morris is cooking at Restaurant Pastel and I have to say his talent has reached a new level of finesse. His dish consisted of seven distinct elements, each set far apart from each other on an expansive white plate. Four of them were cauliflower – tiny, perfectly textured florets of purple, green and yellow varieties, and a wee dab of silky, buttery white cauliflower purée. A golden sphere the size of a golf ball (or a quidditch snitch, if you prefer) turned out to be a cromesquis of juicy confited duck leg seasoned with burned thyme, sage and burned onion, mouthwateringly tender inside a crunchy crust of fried potato flakes. A cylinder of foie gras torchon, half an inch long and no thicker than my pinkie, was wrapped in a membrane of jelly made from salt-fermented edible flower petals that tasted faintly of quinine. The star of the show was a slender circular slice of duck ballotine, its strips of duck magret macerated in a purée of wild mushrooms. Grilled over binchotan white charcoal, the ruby red meat had a delightful texture – a hint of chewiness, nothing pasty – in its mushroom matrix, all held together by a delicate rim of duck mousseline. As a final touch, Chef poured on a little rich jus made from the duck breast bones – a disarmingly pure reduction that amplified the flavours of the ballotine. The chosen beverage was the bold, fruity Izumi genshu junmai sake produced in Toronto’s Distillery District, its creamy weight nicely judged against the textures of the dish, its floral nose working particularly well with the multicoloured cauliflower jewels.

Congratulations to Chef Morris! I can’t wait to see what ideas he brings to the Canadian Culinary Championships in Kelowna next February. Meanwhile the Kitchen Party moves to Ottawa tomorrow. Truly it is written, the fun never stops.