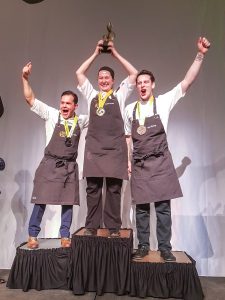 We had been warned that Alberta was already mired in winter after a week of early snow… Not a bit of it. The white stuff had melted away and Edmonton was bathing in sunshine and a balmy 24 degrees as we drove the long, long highway from the airport to the Shaw Centre. The crowd of almost 600 who came out to party were in a merry mood and the evening proved to be a rip-roaring success: there will be plenty of Edmontonians on our trips next year!

In other cities our emcee often comes from the world of sports; this time it was none other than Alan Doyle – Canadian music legend, actor, producer, rollicking raconteur and best-selling author (if you haven’t read his candid and hilarious memoirs you are missing a treat). As a Newfoundlander, he knows a thing or two about kitchen parties and he had the crowd in the palm of his hand. Of course the fun didn’t stop there. To the enthusiastic delight of all, some of Canada’s greatest athletes were in attendance – more than a dozen immortals including Simon Whitfield, Cindy Klassen, Ashleigh McIvor and pro boxer Jelena Mrdjenovic. Providing the music was a stellar supergroup led by Jim Cuddy, Barney Bentall and the aforementioned Mr. Doyle, with Anne Lindsay stealing the show on fiddle (she can’t help but do it every time she solos), Devin Cuddy on keyboard, Sam Polley on guitar and the essential rhythm section from Barney’s own band – Kirby Barber on bass and Geoff Hicks on drums.

For  once, the culinary judges did not retire to their lair as soon as they finished tasting: we stuck around to listen to the first, 20-minute set from the band and thoroughly enjoyed it, feeling charmingly refreshed as we finally got down to work. Our panel in Edmonton is a powerful one, led by Senior Judge Mary Bailey, who is a food, wine and travel writer, certified sommelier and publisher of The Tomato Food & Drink. Joining us was Chef Chris Wood; chef, author and owner of Kitchen culinary studio, Brad Smoliak; pastry chef extraordinaire, culinary Olympian and educator, Clayton Folkers; food writer, travel writer, and restaurant reviewer with CBC Edmonton, Twyla Campbell; award-winning reporter and food writer, Liane Faulder; and last year’s gold-medal-winning chef, Shane Chartrand of Sage. Discussion of the dishes was lively – there was a lovely variety to them and a great many stand-out moments – but our final decision was satisfying to everyone.

Scott Downey of The Butternut Tree won our bronze medal with a gorgeous piece of sablefish from Haida Gwai. Poached in butter infused with lobster mushrooms, dried chanterelles, sea truffle seaweed and woodruff, it was full of subtle flavour and so tender it fell apart into glossy petals at the touch of a fork. Fresh chanterelles, lightly grilled until they were simultaneously supple and crunchy brought out the woodsy hint in the fish. Potato featured twice – as a creamy purée and as lightly pickled cubes, bronzed from the sauté pan. Green fronds of samphire were the colourful garnish, bringing their own fleeting taste of the sea; a foam scented with green alder and sea truffle was a more forthright and salty marine reference. The final touch made use of the ingredients Chef had used in his poaching liquid, drying them out and turning them to a tasty crumble with an intriguing bitter note. The wine that came with this soft-textured sea symphony was the 2015 Savard Pinot Gris Reserve from Summerland, B.C.. Its oaky minerality found sensitive echoes in the sea truffle foam.

We awarded the silver medal to Serge Belair, chef of the Shaw Conference Centre, whose dish was simultaneously a homage to prime Albertan ingredients and his own childhood in Gatineau, Quebec. A slab of delectably lean, maple-glazed pork loin was the principal protein, inspired by the bacon and maple syrup he remembered from the old caban à sucre. A tourtière fritter, like a golden ball of crisp pastry filled with a classically spiced, disarmingly moist tourtière filling was the most delicious thing I tasted all night. A teaspoon-sized, crimson form turned out to be boudin custard, intensely flavourful and rich. Chef had made chicharrons from the skin of the pork loin; a miniature pinwheel of apple and celeriac roulade added freshness and crunch. As a base for all this, satin-smooth celeriac purée brought everything together most harmoniously. I had expected cider as the match but Chef Belair took it a step further, making a nicely judged cocktail of cider and Strathcona Spirits Barrel-Aged gin.

Davina Moraiko of RGE RD won the gold medal. The heart of her dish was a sturdy puck of lightly spiced blood sausage studded with lardo and pearl barley – a most delicious boudin. It sat in a wee pool of cider-sweetened hollandaise as rich and golden as egg yolk. Freshness came in from several directions – from a brunoise of fresh honeycrisp apple; from crunchy, lightly fermented green cabbage, chopped as finely as any slaw; and from a kale and roasted onion fluid gel. A fine green dusting on the plate was made from dehydrated, powdered kale and grated, cured pork heart. Pork crackling chicharrons provided ethereal crunch and a garnish of fresh chervil brought a subtle fennel flavour to the finish. It was a beautifully judged dish, balanced and flawlessly executed, and a perfect match for Chef’s chosen wine, the apple-scented 2016 Riesling from Red Rooster on  B.C.’s Naramata Bench.

Huge congratulations to Chef Moraiko, who will be coming to Kelowna next February! It’s exciting to see our list of champions take shape.

No doubt there was a dazzling after-party in Edmonton (it’s something our organisation does rather well) but most of the KP team missed it. We were all booked onto the redeye flight next morning, leaving the hotel at 4:00 a.m. – which would allow us to get into Halifax just in time to throw another Kitchen Party there. Yep, this is a BIG, beautiful country!