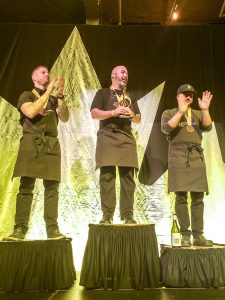 Squeezed like anchovies in a jar on the Air Canada Rouge plane from Calgary to Halifax, the KP team unfolded itself carefully as we made our way into the city. The weather? Horizontal snow flurries and minus temperatures. Then sun. Then more flurries… And we still hadn’t got past Dartmouth. No matter! The sight of the Cunard Centre and the spiffy KP set-up revived all spirits and while the band did a last-minute sound check I made my rendezvous with the culinary judges, a wise and lively team led by restaurant critic and our Senior Judge, Bill Spurr, and joined, as ususal by sommelier, educator and passionate culinarian Amy Savoury; chef, educator and gastronomical entrepreneur, Ted Grant; multiple gold medal winner and now a permanent part of the judges’ roster Chef Martín Ruiz Salvador; and last year’s gold-medal-winning chef, and bronze medallist at the Canadian Culinary Championships, Chef Barry Mooney, late of Gio, now teaching at the NSCC.

Alan Doyle was our emcee once again (see my Edmonton report), growing even funnier as the KP caravan headed ever closer to Newfoundland. And he played for us as well, most compellingly, alongside the great Jim Cuddy, the legendary Barney Bentall, the dazzling Anne Lindsay, and the wunderkinder themselves – Devin Cuddy, Sam Polley, Tally Ferraro and Gianni Ferraro. I’ve been telling everyone how the music has achieved an even higher level than ever before this year. It’s not just me that says so. In full agreement are the crowd of athletes who come to the Party to support one of our other three pillars – sport. In Halifax, we had the opportunity to hobnob with more than a dozen of them, including such greats as Curt Harnett, Adam Van Koeverden (that’s him on the right), Karen Furneaux and Mark De Jonge.

One or two of them dropped by to say hello at the judges’ table, raised up and spotlit in the centre of the room. There we tasted. There we pondered and came to our separate conclusions. Then we went off to our lair to talk about it all and crunch the scores.

Geoff Hopgood took the bronze medal with a really original, deeply delicious dish that a couple of the judges felt to be the evening’s best. It began with a warm quarter-circle of fried potato waffle, like a latke that had been educated in Belgium, its surface crisp and golden, its interior moist and yummy. Beside it was a giant quenelle of forked snow crab salad, topped with a generous spoonful of Acadian sturgeon caviar. Alongside that we found a drift of finely chopped chives and another of caramelized cream shavings, soft and seductive and tasting of beurre noisette. Tangy pickled shallot threads were the lone condiment. “Pile it onto the waffle and eat it like that,” suggested Chef. We did. We loved it. Chef Hopgood is chef at Lightfoot & Wolfville Winery, so it was no surprise that his chosen wine came from there – the crisp, disciplined 2017 Sauvignon Blanc from the Terroir series – a very handy match. 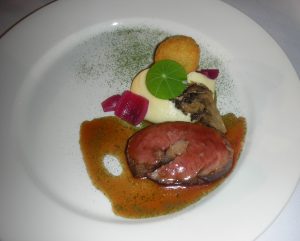 We awarded the silver medal to Michael Dolente of The Carleton. He gave us a perfect piece of beef – a thick slice of Atlantic Blue Dot Reserve ribeye, cooked sous-vide to medium rare and crusted with chanterelle powder. Beside it was a croquette like an arancino made with the restaurant’s own asiago cheese, crisp on the surface, admirably gooey inside. A smoked parsnip purée enriched with bone marrow and beef fat was predictably irresistible. To counteract such riches, petals of pickled pearl onion brought a forthright tang to the dish while maitake mushrooms, cured three times, in salt, then vinegar, then olive oil, proved a more subtle condiment. A single tiny nasturtium leaf and a sprinkling of green parsley powder garnished matters while the finishing touch was a hot veal demi-glace, spooned over the beef at our table. As a match, Chef chose Old Bill, a big, tangy local red from Luckett Vineyards in Nova Scotia’s Gaspereau Valley.

And the gold? Thomas Carey of Fresh Twenty One was our champion this night. He began by curing foie gras but rather than turning it into a mousse or a straight torchon, he conjured a texture much more like pan-seared foie. Each dish got just a little of it, encircled by a ring of pulled oxtail, the braised meat admirably juicy and flavourful. As a sauce he made a sunchoke soubise, light and foamy as air, and used it to poach an oyster just beyond rawness. I loved the textural similarity of the oyster and the foie gras, the contrasting land and sea flavours. Crispy dulse was sprinkled on top and there were crunchy pickles to add other variety and cut the richness. Crowning everything was a little salad of mustard greens, frisée and fennel fronds – fresh and herbal and so much more than a garnish. Chef’s wine match was a winner in my book – a funky, yeasty rosé fermented in a cement egg with plenty of minerality to reach out to the oyster and the soubise – the 2017 Wild Ferment Cabernet Franc Rosé from Benjamin Bridge in Wolfville, NS.

Complex and original work from Chef Carey. I have no doubt he will bring his A game to Kelowna next February.

But that was last night. Now, 24 hours later, I find myself in St. John’s, Newfoundland, ready for another culinary adventure in the place where Kitchen Parties began. Watch this space…