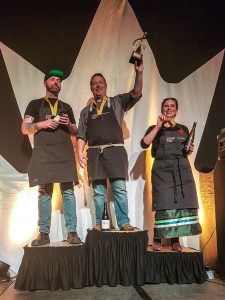 Forget-me-not skies and dazzling prairie sunshine greeted the scattered caravan of Kitchen Partymakers as we made our Saturday rendezvous in Saskatoon. Last year, the event in this city was one of the highlights of the campaign and we were all hoping for a repeat of that triumph – a pretty good bet with George Stroumboulopoulos to emcee our show with all his inspirational energy, and a list of athletes as long as my arm, including the great Marnie McBean, Derek Drouhin, Dominik Gauthier and Kirk Myers. The party was in full swing by the time the auction began and each of our trips sold over and over again – bidding beyond brisk. It soon became clear that we were going to set a new record. Our guests earned their entertainment, provided by the very heartwood of our musical family tree – none other than Jim Cuddy, Barney Bentall, Anne Lindsay, Devin Cuddy and Sam Polley, with Tally Ferraro on bass and Gianni Ferraro on drums.

From the culinary point of view, it was an equally heroic evening. Looking at the menu before the tasting began, I was amazed at the breadth of ideas – everything from Brazilian street food to foie gras to a vegetarian dish finished with “dandelion root honey dust” (one of the prettiest ingredient descriptions I have heard in a long while). Luckily, the panel of judges was as focused and professional as ever, led by our Senior Judge for Saskatoon, writer, caterer and dining columnist for Planet S magazine, leader of Slow Food Saskatoon, Noelle Chorney; together with poet, author, restaurateur and co-founder of Slow Food Saskatoon, dee Hobsbawn-Smith; chef and culinary instructor Michael Beaulé; author, food writer and Senior Judge emeritus, Amy Jo Ehman; chef, educator and Director of Food Services at Innovation Place, Peter Phillips; and of course last year’s gold medal winner, Chef James McFarland of the University of Saskatchewan.

We awarded the bronze medal to Jenni Schrenk of Chef Jenni Cuisine. She called her beautifully presented dish Li Salay – “the sun” – in honour of her Metis heritage and explained that it involved nine different members of the sunflower family. First off was a comma of silky sunchoke and marigold velouté painted onto the plate, topped with a spoonful of warm, rich, flavourful mushroom and endive-stem duxelles. Furled drums of bittersweet endive had been braised in Riesling with tarragon, chamomile and a touch of honey, their texture perfectly “tender-crisp.” A dab of white sunflower seed froth and the top of a raw endive petal brightened the plate. Rising like a dark fin behind the other ingredients was an ethereal crisp made of wild rice and red rice cooked in chamomile tea, then dehydrated, powdered, rolled and fried like a chip. Chef accrued more technical marks with dots of a tangy red leaf lettuce emulsion and charmed us all with the aforementioned dandelion root honey dust, lightly scattered over the dish. Fried tarragon leaves and marigold leaves were the final touch. The dish’s intellectual integrity was matched by the impeccable balance of so many subtly different but harmonious plant flavours and the nicely judged textural contrasts. Chef’s wine match was the tart, tangy 2017 Qwam Qwmy Riesling from NK’Mip Cellars in Osoyoos, B.C.

Jonathan Harris of Shift (part of the Oliver Bonacini empire) won our silver medal. He made a splendid zampone sausage from pork skin, cheek and shoulder, delectably moist and seasoned with chilies. Beside it was a sphere the size of a golf ball with a light tempura crust hiding loose-textured Spanish-style blood pudding – again admirably moist and sporting sizeable chunks of tasty fat. Both these treats sat on a mound of black lentils, cooked to the perfect texture. A snow-white cube of lightly pickled daikon cut the richness of a smooth russet-coloured sauce made of kimchee, miso and mustard. It was a relatively simple dish but elegantly executed and the judges agreed they would be delighted to eat it again – immediately. Chef’s wine match was also excellent, the complex, mature 2011 Cabernet Franc from Domaine Queylus in Niagara, Ontario.

Christopher Hill of Taste Restaurant Group won the gold medal, something he has done before. He named his dish “After The Fire” and presented it alongside a belljar in which wood chips smouldered. At its heart was a roulade of lightly cured, lightly smoked duck breast, confited and rolled with wild boar sausage, the meat blessed with a wonderfully juicy toothsome texture. Behind it Chef piped an aerated foie gras mousse with an ethereal texture, its surface tinted red with beet juice. Here was a parsnip purée, subtly flavoured with rosemary, there a whole morel sautéed in butter, and there a small mound of tender-crunchy cabbage. A hank of reindeer moss spoke of the woods while dots of intense sour cherry syrup recalled the orchard. A strip of chewy “bark” was made of salsify cooked in birch syrup, adding an intriguingly dark and bitter note to the spectrum of flavours. Juniper jus and flower petals finished the dish. A whisp of smoke from the belljar hung in the air – as it once did over the vineyard that produced the wine Chef chose, the 2017 Pinot Noir from Meyer Family Vineyards in the Okanagan Valley, a mouthful of spicy cherries. In that year, wild fires raged over the surrounding hills, though the grapes survived untouched.

Congratulations to Chef Hill who comes back to Kelowna next February. And bravo to the crowd of guests in Saskatoon, who did so much for our three beneficiaries with their eager generosity. Next up: Toronto’s Kitchen Party on Monday. It’s going to be great!