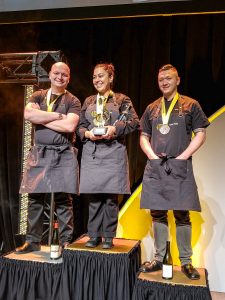 Toronto was full-throttle party central last night – a most spectacular affair, long since sold out, with technical production soaring to a completely new level of dazzling visual effects. The music was incredible thanks to our super-powered musical line-up of Jim Cuddy, Ed Robertson, Tom Cochrane, Anne Lindsay, Bill Bell, Devin Cuddy, Sam Polley, Dustin Bentall, Kendel Carson, Tally Ferraro and Gianni Ferraro. And over 40 athletes, many of them household names, came to show their support for the Kitchen Party, including Tessa Virtue and Scott Moir, Erica Wiebe, Heather Moyse, Jennifer Botterill, Brian Stemmle… The list goes on and on! Our brilliant emcee, George Stroumboulopoulos, kept things moving at a great pace until the moment came when the gold, silver and bronze medal-winning chefs were announced, each one coming on stage through a kinetic light show and a most dramatic mist of dry ice.

The three who reached the podium were clustered in one of the tightest-scoring groups we have ever seen. Each judge had the three of them in either first, second or third and when every point was tallied, gold and bronze were only separated by 1.5 percentage points. Who made up the judiciary of this exciting photo-finish? We were led, as ever, by our Senior Judge for Toronto, writer, editor and food guru, Sasha Chapman; together with the renowned chef, and Canada’s greatest culinary educator, Chef John Higgins; chef, entrepreneur and beloved tv star, Christine Cushing; author, food journalist and proprietor of the delectable Rosen’s Cinnamon Buns, Amy Rosen; last year’s gold medal winner, Chef Lorenzo Loseto of George; and finally our special guest judge, rock star and legendary gastronome Geddy Lee.

Here’s how it all went down. We awarded the bronze medal to Keith Pears of the Delta Hotel, Toronto. He worked with excellent Rougie duck from Quebec, giving each of us a perfect slice of the breast. Most of the fat layer had been melted out but the tender flesh was still pink and juicy. Propped up beside it stood a tissue-thin crisp of the duck’s skin and close by was a croquette of rich, well-seasoned duck confit and mushroom duxelles crusted with sesame seeds. Combining a little of the croquette with a piece of breast on one’s fork brought both elements into a delicious balance. The fourth duck component was a ball of creamy foie gras parfait, subtly flavoured with peach and vanilla and contained by its own “skin” achieved through some arcane molecular technique. On top of the breast was a small purple tricorn hat that turned out to be a thin slice of beetroot, pinched together to become a container for a rich tartare of beet, apple and cream cheese. Chef piped dots of squash purée onto the plate – he had included squash juice in the recipe which gave the flavour a slightly funky edge. A spoonful of emulsified jus tasted intensely of duck. It was a disciplined, elegant dish, full of precise techniques. Chef’s wine match was a bold one, choosing white rather than red, but it worked well – the oaky 2016 Barrel-fermented Chardonnay from Trius winery in Niagara.

Gian Nicola Colucci of the Four Seasons Hotel won the silver medal. He began with pork belly, curing it with salt and a little sugar, brining it, smoking it over cherry wood, cooking it sous vide and then cutting it into small brick-shaped pieces which he briefly deep-fried. The result was awesome – crisp on the surface and meltingly tender inside – like bacon that had gone to heaven. Next to this was a generous mound of a classically flavoured sauce Gribiche, its base of egg and walnut quickened with olives, capers and anchovies: chef had lightened the sauce’s texture to an aerated emulsion. A crunchy little tapioca “chicharron” was seasoned with powdered espalette peppers, giving a sly heat that kicked in late. A dust of yuzu and lime salt with more of the espalette powdered a small area of the plate. Two baby kale leaves offered a token gesture towards the vegetable kingdom. Again, Chef’s wine match was a winner – the off-dry 2016 Estate Riesling from Hidden Bench Estate Winery on Niagara’s Beamsville Bench, a wine full of the aromas of apple and citrus, natural allies to pork.

We gave the gold medal to Elia Herrera of Los Colibris. She too chose pork belly as her protein, giving it three separate cures over three days then cooking it sous vide for 12 hours, before cutting it into slices and finishing each one in a hot pan to crisp the meat’s surfaces. On top of the pork we found a small quenelle of a smooth greeny-brown purée that Chef described as a Yucatan-style salsa of ground pumpkin seed spiked with habanero chilies and garlic. “Spread it over the meat,” she advised and we obeyed. Too fiery to eat on its own, it was a perfectly judged amount to work as a condiment when carefully spread, adding delightful heat and complexity. Talking of complexity, Chef created a Oaxacan-style mole negro as the dish’s sauce; smooth and almost black it seethed with the dark, smoky flavours of various chilies and bitter chocolate. The pork sat on a slice of corn tamal, its texture turned from a polenta into something as smooth as a mousseline by the addition of pork fat. Cutting these riches was a supreme of fresh orange marinated in orange flower water and a suggestion of cinnamon. Tiny drops of pumpkin seed oil seasoned with ancho and chapulin added a finishing touch. It’s always exciting when a chef cooks from the heart, offering food he or she is passionate about rather than some anonymous competition dish. “The more of this you eat, the more you enjoy it,” pointed out one of the judges. Chef’s chosen wine was a good choice, adding fruity reinforcement to the refreshing orange on the plate: dry but full of red berry flavours, it was the 2016 Estate Cabernet Ros´from Southbrook Vineyards in Niagara-on-the-Lake.

Chef Herrera won and will come to Kelowna in February – but really the entire evening was a triumph, a testament to the extraordinary thought and planning that goes into every Great Kitchen Party. Up next, on Thursday, it’s Calgary’s turn to experience all the fun.