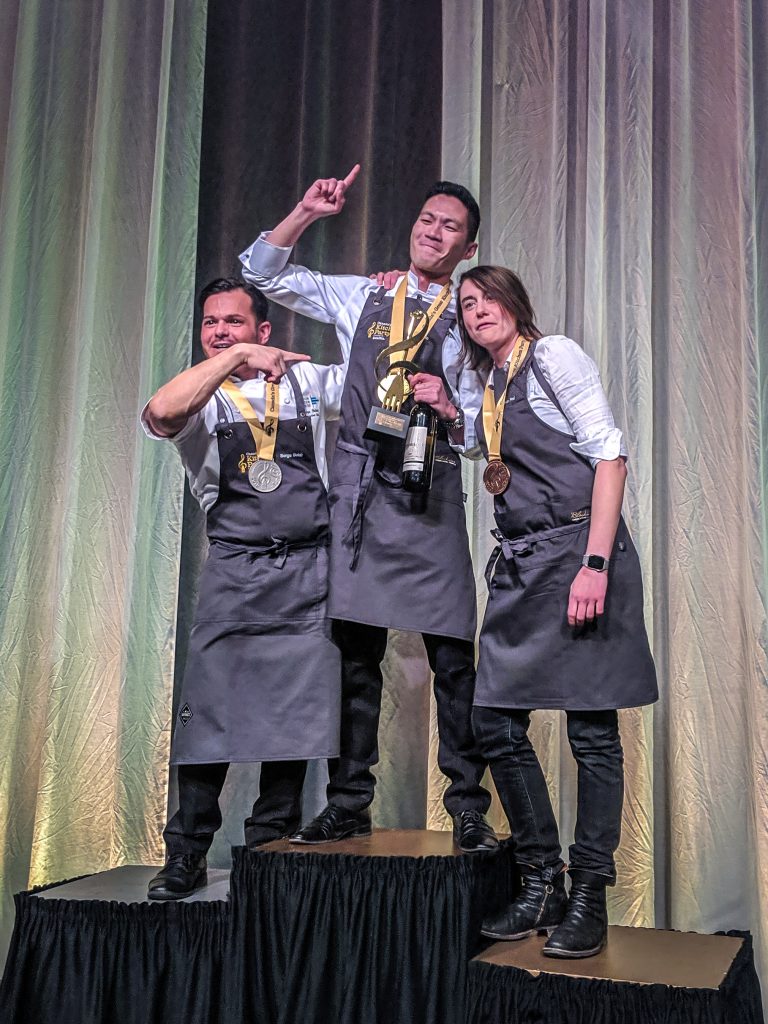 The first inklings of autumn were definitely in the air for our Toronto and Vancouver gigs last week. In Edmonton, however, it felt more like winter had already arrived. Yes, the sun dazzled in a cloudless blue sky but many trees were already bare and the temperature hovered just above zero. Not that this came close to cooling the ardour of the Kitchen Party team on the looooong drive in from the airport, all of us looking forward to the evening ahead with a breathless anticipation. After all, the line-up for the show was simply stellar, headlined by a powerhouse of musicians: Jim Cuddy, Barney Bentall, Bill Henderson, Anne Lindsay, Devin Cuddy and Sam Polley, with Rob Becker on bass and Pat Steward on drums. The world of sport was equally well represented, as our emcee, the great Olympian Curt Harnett, pointed out to me in the cab – with a host of elite athletes from Olympic and Paralympic competition. Later he would interview some of them on stage (Benoit Huot and Lori-Ann Muenzer were particularly passionate and inspiring), to the delight of the crowd, a sizeable percentage of whom turned out to be wild and crazy demiurges of the dance once the musicians really started to rock.

Sport and music ticked every box, to be sure, but what of the Kitchen Party’s other and most delicious pillar, the culinary? This year’s line-up of chefs was of the highest order, most of them seasoned veterans of our competition, but in that respect they were matched by the judges – a crack posse of professionals. This year, I’ve asked each judge to describe herself or himself in their own words (faithfully set down here in parenthesis). With me were Edmonton’s Senior Judge Mary Bailey (writer, magazine editor, podcaster, lover of bubbles (in wine, that is)); Chris Wood (a well aged and seasoned chef, a Gold Medal Plates winner, still enthusiastic and optimistic); Clayton Folkers (instructor at NAIT, international judge, pastry chef, coach and mentor); Twyla Campbell (restaurant critic, food explorer, soup aficionado, author and oenophile); Liane Faulder (urban enthusiast, food tour guide, columnist for The Edmonton Journal); Brad Smoliak (VAD powered, happy husband, proud father, chef, grateful, passionate yet forgetful lover) and Chef Davina Moraiko, Edmonton’s gold medallist from 2018.

As the competition hour approached they joined me in the centre of the vast salon with its stunning views of the North Saskatchewan river. We sat around a table raised upon a dais as if we were 18th-century French royalty separated by velvet ropes from the curious masses wishing to watch us eat. Reading through the dishes that were to come, I was slightly surprised to see no beef at all (this is Alberta) and only one recipe using lamb. Doreen Prei of Zinc Restaurant presented a gorgeously autumnal vegetarian dish and Scott Downey of The Butternut Tree garnished his dish with carpenter ants (a first for this competition (they tasted like lime zest)) but scallops, duck and foie gras were by far the most popular ingredients at the majority of stations – such is the gastronomical zeitgeist of Edmonton this fall. Every chef seemed to bring his or her A-game to the Party and deciding which three should reach the podium was a serious challenge.

In the end we awarded the bronze medal to Doreen Prei of Zinc Restaurant, who also won the People’s Choice award for her dish. Her decision to create a vegetarian plate was partly a reflection of her concerns for the environment and it certainly proved that protein is far from a sine qua non in our competition. At its heart were three squash dumplings like little orange-coloured pillows, soft, rich and sweetly rooty, their surface slightly bronzed in a pan. Slivers of buttery pan-seared maitake mushroom were strewn around them, along with pine nuts, lightly smoked in applewood, and some finely shredded truffles. Dime-sized crisps of deep-fried sunchoke provided textural variety and the dish was finished with some tiny, bright blue bachelor’s button blossoms. A spoonful of lightweight carrot butter provided the sauce, beautifully bringing together all the subtle, woodsy flavours. Chef Prei chose a lovely red for her match – Stoneboat Rock Opera 2015 Pinotage from Oliver, B.C.

Serge Belair of the Edmonton Convention Centre won silver with an impeccable treatment of the fabulous local duck from Four Whistle Farm. He dry-aged the breast, cooked it sous vide to medium-rare perfection then crisped the skin, setting a single slice on the plate. Beside it was a wee drum of duck confit, the meat pulled from the leg, pressed and shaped, then rolled in crispy kataifi pastry threads. The third element was a tan-coloured sphere – a crispy shell of pomme soufflée, improbably thin and delicate, that held a rich and runny foie gras mousse, flavoured with “pumpkin pie spice.” A technical tour de force it was also absurdly delicious! Chef held the sphere in place on a small plinth of pickled pumpkin with a dab of pumpkin purée. For a sauce, he made a gastrique using the duck bones, heavy as a demi-glace and subtly sweetened with maple. Tiny pink flower petals were the final garnish. Chef Belair’s wine was a 2018 blend of Merlot, Malbec and Syrah called Dangerous Liaisons made by Dirty Laundry in Summerland, B.C. A red in the modern style – smooth, ripely fruity and a little sweet – it was a terrific match, picking up the delicate sweetness and warm spices in the dish.

JP Dublado of River Cree Resort and Casino won the gold. At the heart of his dish was a small block of a terrine made with pungent char siu foie gras, cured duck egg yolk and four layers of truffle – a gorgeous umami bomb that had the judges swooning. Beside this was a curious vermilion dumpling that tapered up to a point. The surface was mashed purple ube yam, crisply fried, while inside we discovered rich and flavourful chicken rillettes. All sorts of little treats surrounded these two items, so that each mouthful was an entirely fresh experience. Here were little drums of kiwi fruit (that banal fruit’s finest hour?) topped with tangy soy-pickled baby chanterelles like jaunty little hats. Over there was a pool of silky yellow purée made from parsnip, carrot and brown butter. Calamansi pearls tart with verjus and green tea added a sharp component; white foie gras powder brought more soft fat to the party. Burgundy truffles had been grated in a couple of places and a single blue pansy completed the spectrum of what was already a mighty colourful plate. Chef’s wine was a fine match, the opulently aromatic 2018 Sauvignon Blanc-Semillon blend from Howling Bluff on B.C.’s Naramata Bench, its passion fruit intensity standing up well to the big flavours of the dish.

Three cheers for Chef Dublado, who becomes the third regional gold medallist bound next year for Ottawa and the Canadian Culinary Championships. The Kitchen Party now feels as if it is in full swing, with Halifax our next port of call.