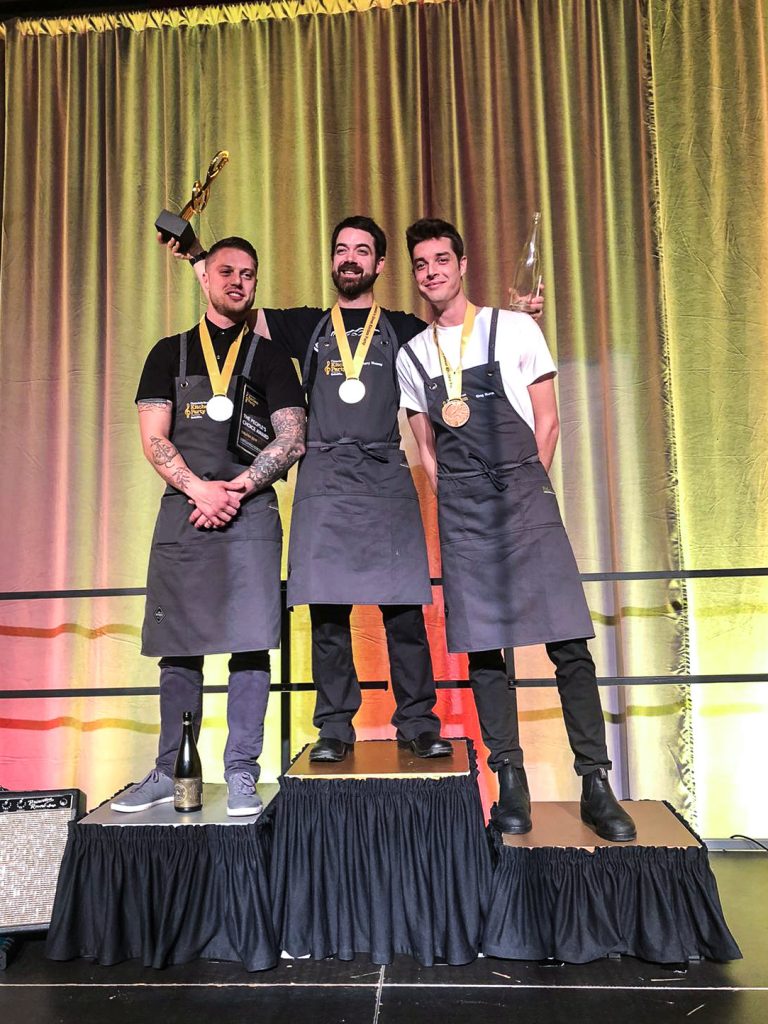 I don’t suppose this is an original observation, but the weather in the Maritimes is apt to be changeable. Yesterday afternoon we had blazing sunshine and a balmy breeze, then horizontal rain, then hot sun and calm water again, all in the space of an hour. They’re used to it in Halifax, of course, and not an eye was batted. And the fine weather persisted as the guests arrived for the Great Kitchen Party at the Cunard Centre, hard by the Atlatic ocean.

It was a fabulous nght. Heather Moyse took on the emcee duties with her customary spellbinding charm, drawing wit and wisdom from the score of Olympic and Paralympic athletes who joined her on stage. Headlining the entertainment were none other than that inimatble troubadour Alan Doyle with his regular accomplices Cory Tetford on guitar and Kendel Carson on violin, and also rock legend Tom Cochrane, with guitar maestro Bill Bell. If you were with the Kitchen Party trip to St. John’s earlier this year (and that really was a PARTY) you will know that Cory and Kendel, duelling solos mano a mano, guitar and violin, can make otherwise demure, sober civilians scream and roar in hysterical appreciation. So imagine the effect they had on the ecstatic Halifax KP crowd last night, a group of people already totally stoked by Messrs Doyle, Cochrane and Bell!

The culinary judges had their own keen source of delight as the level of quality of the dishes was the best Halifax has ever offered. The three creations that reached the podium would have done so anywhere in the country. Ranking them was a difficult task so it was a very good thing that the judicial posse was so accomplished. Joining me on the dais were Bill Spurr (Senior Judge, food and wine writer, rum and barbecued ribs enthusiast); Ted Grant (unapologetically enthusiastic about life, forever an optimist, passionate consumer of food and wine); Amy Savoury (sommelier, educator at NSCC, passionate advocate for nurturing Nova Scotia’s culinary culture); Martín Ruiz Salvador (chef, restauranteur, three-time Gold Medal Plates champion, husband, father, humanitarian); Alain Bossé (The Kilted Chef, Atlantic Canada’s Culinary Ambassador, over 35 years of culinary experience under his kilt); and Chef Thomas Carey, Great Kitchen Party gold medallist, 2018.

Here’s how matters went down. Greg Burns of Gio won the bronze. His “Fruits de Mer” was stunningly beautiful, a collation of many delectable flavours and textures. Its base was a rectangle of smooth scallop mousseline no more than an eighth of an inch high and spread with a layer of sauce made from black garlic and onion purée. Perched on this bed were three cod cheeks cooked sous vide with milk, thyme and a dab of burnt honey then dusted with dehydrated sea lettuce. Tucked in amongst them were mussels that had been marinated in olive oil, smoked thyme, a touch of maple, garlic, smoked paprika and shiitake mushroom – each one a tender umame bomb. Tiny pickled chanterelles added a sweet tang. Jaunty plumes of crispy kelp stuck up from the dish beside little clouds of lightly pickled reindeer moss and the whole assembly was finished with a spoonful of foam from the mussel liquor, a sprinkling of seaweed powder and some colourful nasturtium leaves. It was a cornucopia of effects that all made for gorgeous harmonies on the palate. Chef had created a cocktail to echo many of his flavours, using Coldstream premium vodka, Nova Scotia apple cordial, Grand Pré icewine, burnt citrus and thyme – a most successful match.

The dish that won the silver medal also won the People’s Choice award for chef Michael Dolente of The Carleton. He chose to work with pork cheeks, brining them for 24 hours then cooking them sous vide for another 24 together with coriander, fennel and Szechuan peppercorns. The meat was perfectly textured – juicy but not gelatinous – and deliciously porky under a green crumble of breadcrumbs and dried parsley. Set beside the cheek and of equal importance, was a slice of scallop terrine that was basically a whole scallop (tender as the night) with a heart of tremulous foie gras torchon and slivers of tangy, lacto-fermented turnip, all wrapped in nori. Chef finished the dish at the table by pouring on a lip-smacking and sensationally yummy broth made from rich chicken stock infused with prosciutto. Then he added a few drops of chili oil that lent a sly heat to the proceedings. The judges loved it all as much as the crowd did and also applauded the match – Lightfoot and Wolfville’s 2014 Blanc de Blanc brut – a tangy Nova Scotian bubbly from 100 percent Chardonnay full of green apple and mineral notes that cut through the cheek like a knife.

The gold medal went to a chef who was won it before – Barry Mooney of Fresh Twenty One. He set himself the task of interpreting sturgeon caught in the St. John river, New Brunswick, without any reference to caviar. So we were presented with a finger of sturgeon belly, lightly cured with koji that chef had cultivated from sushi rice in his kitchen, then hot-smoked with applewood. The moist fish was then glazed with a fermented koji and soy lacquer that burst onto the taste buds. Close by were little drums of delicately flavoured, moussy sturgeon boudin blanc, and discs of daikon poached in kombu-infused chicken stock, each one the size of a quarter. Chef had also used the sturgeon bones and cartilege, cooking them under pressure then puréeing, dehydrating and turning them into ethereal little crisps, lightly seasoned with togerashi spice. Little dots of creamy apple purée and even smaller dots of green parsley purée played minor roles but the principal sauce was a gorgeous tonkatsu emulsion of reduced chicken stock and cider vinegar. The richness on the plate was nicely balanced by another local bubbly, Benjamin Bridge small lot, late disgorged NV Brut. In terms of technique and imagination, the dish was a tour de force – enough to overcome very stiff competition and take Chef Mooney to Ottawa in February for the Canadian Culinary Championships.

Well done to all the chefs for such a strong showing and to the Kitchen Party’s splendid team for another stellar event. On the horizon? Moncton, here we come!