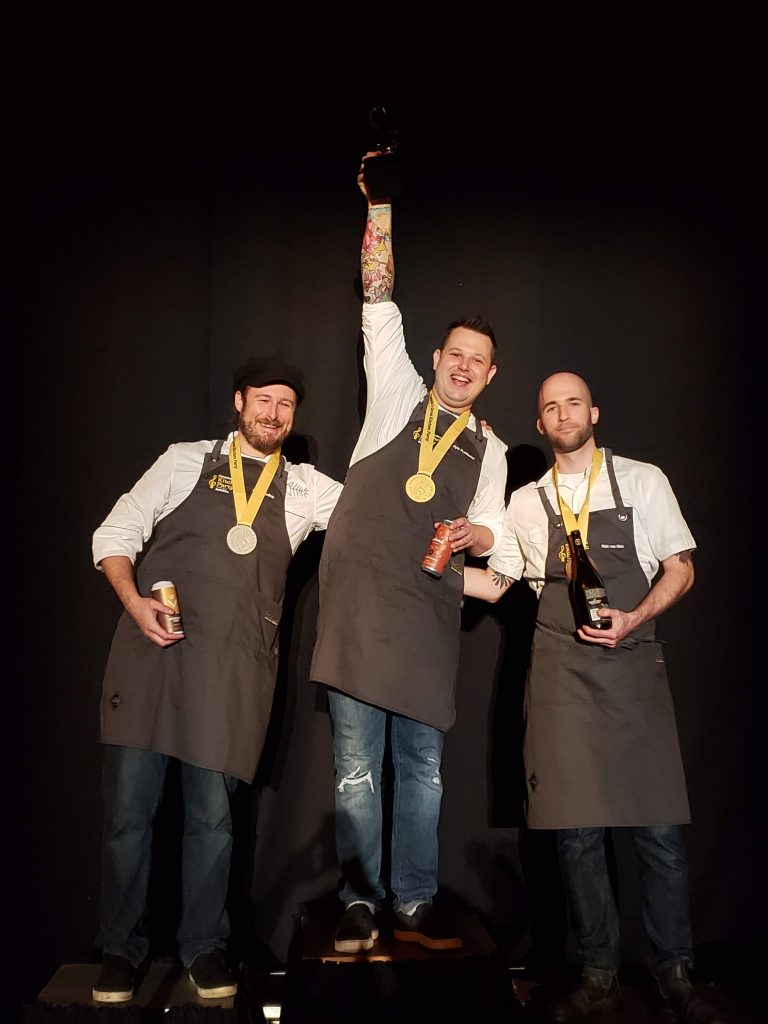 We landed in Newfoundland at dusk on Halloween and were safely in St. John’s just as the first jack o’lanterns were lit. Our wayward timetable gave the Kitchen Party 24 hours free time on the Rock and you can be sure we put it to good use. I went for a walk around Battery Bluff and up to Signal Hill and though the wind very nearly blew me into the ocean, it was a warm, dry hurricane under blue and sunny skies. On Friday night, appetite fully restored, I was primed and ready for Canada’s Great Kitchen Party, St. John’s edition.

If you were on the St. John’s trip earlier this year – or if you’ve ever spent 90 seconds with Alan Doyle – you’ll understand everything that is implicit in the news that he was our emcee. Hilarious, wise, wicked when he wants to be, he held the room spellbound. He also led our unique band, alongside the great Bill Henderson, singer-songwriter-guitar-supremo Cory Tetford and superstar local trio The Ennis Sisters, whose close and beautiful harmonies would shame the angels. Someone had found Olympic cyclist Curt Harnett’s old Pert Plus shampoo ad from the last century and played it on the big screen. It brought the house down before Curt interviewed his fellow athletes on stage – Para-swimming legend Benoit Huot, sprint canoeist Katie Vincent and curling gold medallist Jamie Korab. The excitement never abated and when the auction came around we sold a record number of trips.

Nick van Mele of The Grounds Café in Portugal Cove won the bronze medal. All his ingredients came from close to his restaurant and the dish paid tribute to his favourite locally foraged wild mushrooms. There was protein – thick slices of a wonderfully tender and juicy chicken breast ballotine, stuffed with finely chopped chanterelles. And there were leeks – little drums of the white and pale green parts poached in chicken stock with thyme, garlic and black pepper. The dark green leek leaves were used to make an oil and also an ash that Chef used to finish the plate along with fresh thyme and tangy fresh sorrel. But the mushrooms were the heroes. Winter chanterelles and hedgehog mushrooms were confited in thyme and garlic. Some more of them were turned into a buttery duxelles perfect for heaping onto a forkful of the chicken. And the mushroom trimmings scented the rich jus made from chicken and veal stock and wine. All those ‘shrooms found and amplified echoes of their own in Chef’s chosen wine, Pelee Island 2017 Pinot Noir Reserve from Ontario’s Pelee Island Winery.

We awarded the silver medal to Adam Gollop of Bad Bones Ramen in downtown St. John’s. His menu there is Japanese and so was his dish last night. Its star turn was perfectly char-broiled blue fin tuna, raw, sweet and juicy behind its fringe of smoky sear. Beneath it was a mound of tomago rice cooked with a hint of kelp and a colourful stripe of carrot and miso purée subtly flavoured with ginger and garlic. More delectable umami arrived with the dish’s two sauces – the first a smoky dashi butter, the second a boldly flavourful purée of peppered chicken livers boosted with soy, garlic, ginger and kelp. All sorts of other little touches made sure that every bite was different – a teaspoonful of glorious caitlin roe to dress the tuna; beet threads and sliced radish; scallion and a tiny wheel of lotus root and a pinch of powdered nori to finish. Chef’’s chosen beverage was the Marzen Amber Lager from Quidi Vidi Brewery in Quidi Vidi.

Kyle Puddester of Fork in Mobile NL won the gold medal. He presented wild willow partridge, hunted by a friend of his on the southern shore – beautiful and substantial birds that chef honoured by using every scrap. He cooked the breasts sous vide with thyme, rosemary, garlic and butter – the purple meat was wonderfully tender and moist. He made a mousse of the liver and wrapped it in fried caribou moss. He cured and air-dried other breasts to make a sort of partridge bresaola, using a thin slice of it to wrap the braised heart of the bird, which in turn was stuffed with ground gizzard. The partridges’ crops had been full of wild blueberries when Chef plucked and cleaned them, and there was a subtle blueberry note to their flesh that he amplified with a spoonful of blueberry-crowberry relish. And there was more… Chef confited the leg (leaving the claw on to thrill our guests) – again the meat was sumptuously rich and tender. He took the final scraps of the birds and turned them into a bit-sized croquette with its own crispy crust. The bones became a rich stock, some of which went into a porridge of golden quinoa and onion, and some into an unctuous jus. To finish he added winter chanterelles sautéed with sprigs of lamb’s quarters, and more winter chanterelles pickled in spruce vinegar. Chef is a bit of a home brewer himself but to match this dish he showed it off to the brewers at Landwash Brewery and together they created a saison perfectly matched to its flavours which they called Rock & Willow, in honour of Newfoundland’s two kinds of partridge.

Huge congratulations to Kyle Puddester who wowed the judges last night and will be yet another strong contender at the Canadian Culinary Championships in Ottawa next year. It really is building up to be the hardest-fought contest we have ever staged! Next week, we will see what Calgary brings to the table.