There are a few more things about my recent week in Yorkshire that had better be said before the memory of them fades entirely. Thirty-five of us set off from Manchester, driving north in five vehicles until we were almost in the Lake District then turning east to take us up onto the Pennines. Crossing a cattle grid, we entered the Yorkshire Dales National Park and left the rest of the world behind. The park is 685 square miles of bleak heather-covered fells and peat hags, broad green glacial valleys, little rivers and waterfalls, tens of thousands of ewes and lambs and rabbits, villages and isolated farms, medieval castles and medieval pubs, the buildings all made from the local stone. There are over 10,000 miles of dry stone walls, some dating back to the 18th century enclosures of common land, others much older. As if to emphasize the antiquity of the surroundings my laptop and my camera both croaked halfway through the trip so I was forced to write down my snapshots in a notebook. Here are some of them.
Our first meal in the Dales – lunch at an isolated pub in Keld – coming in out of the rain and crowding up to the bar for the first, much-anticipated pint of Black Sheep Riggwelter cask-conditioned ale, a strong, dark ale with rich coffee notes. Our guide, Mark Ried, is here with his chocolate-coloured pointer, Elvis. Lunch is good – a bowl of unpretentious lamb stew with suet dumplings followed by apple crumble and jugs of hot custard to pour over it. Then it’s off into the damp grey afternoon for a quick three-hour hike to the village of Muker and back, refreshed by a pint of incredibly hoppy Muker Silver IPA at the Farmer’s Arms.
What makes Yorkshire ale so special? For one thing, it’s cask-conditioned – still alive, still fermenting in the cask – not like draught beer from a keg which is pasteurized, filtered, carbonated, chilled, dispensed under pressure, dead. A hand-drawn pint of real ale is an altogether different thing and here in Yorkshire they fit sparklers onto the end of the spout. A sparkler is like a spinning spray at the end of a garden hose. It spins as the beer passes through it, aerating the beer, giving a soft creamy texture and a fabulous head. They say it takes the bitter edge off the hopping (Yorkshiremen describe London ales as hard and thin) but all our group feels there is plenty of bitterness to be going on with.
Arkengarthdale. Setting off next morning from our hotel across the narrow valley, up past the Duke of Norfolk’s shooting lodge (he only uses it a couple of weeks a year during grouse season) – climbing through woodland, the shaded slopes smothered in bluebells or ransom, a pretty little white flower that fills the air with the scent of wild garlic. The aroma makes me look at the lambs in the meadow in quite a new light. They are Swaledales – white fleece, black faces, white eyebrows – and delicious in every way.
Another day we hike higher over the fells, climbing past an old farmhouse, its roof and chimney smothered in pink and white clematis like an 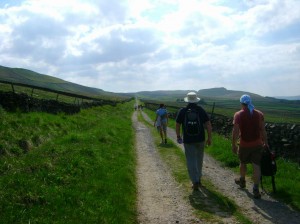 illustration from a book of fairy stories. Then higher past the remains of lead mining first begun by the ancient Romans – I find a lump of smelted galena, glossy and black like an obsidian fist. Up onto the fells in hot sunshine – until a hailstorm passes, then more hot sun, then rain, then sun again, all in the space of an hour. This is the moorland where the grouse breed beneath the wiry heather (the fells are purple in the autumn) but we don’t see any, just a lonely curlew calling for its mate.
Then coming back down towards a distant village, sliding through gap-stiles in the dry stone walls to cross hay meadows so full of yellow buttercups, white daisies and red clover you can barely see the grass. More birds down here – a pair of peewits swooping over us, trying to attract attention away from their nest – pheasants strutting in their magnificent stupidity as the summer ticks towards the opening of the shooting season.
The Charles Barton Inn, Arkengarthdale – playing darts with the locals – learning the game of quoits (tossing iron rings at a distant post set in a square of soft clay) – dinner of pigeon breast, tender venison and sticky toffee pudding. Kippers for breakfast or a proper English plate of bacon, sausage, black pudding, eggs, tomatoes, mushrooms and toast. We are all eating like hobbits.
On to Simonstone Hall in Wensleydale for the second half of the week – a grander location altogether, like a Gothic shooting lodge, with a croquet lawn and formal gardens. The group is coalescing now, coming together for a Pimm’s tasting one evening, another day touring a 14th century castle still in the hands of the family that built it – the owner gives us the tour. One room is fitted out as a guardhouse and the owner hands a longbow to our Olympian oarsman, Adam Kreek, to see if he can draw it. He is so strong he breaks the bow in three. Fortunately, it is not an original. A generous member of the troupe buys us all Champagne that night as we dine at the Wensleydale Heifer, a renowned gastropub famous for the seafood they bring in daily from Grimsby. I choose dressed crab and a baby turbot pan-fried with capers and brown butter. The best event is an after-dinner concert back at Simonstone Hall given by crooner Matt Dusk who is spending the week with us. Matt takes us through his songbook – Gershwin and Johnny Mercer, even a great ballad by Bono – and the standing ovation is loud and long.
We will do this again next year with a different group – whoever bids highest on the trip at Gold Medal Plates events across Canada.