To Parkdale on a sunlit Sunday morning, riding the streetcar along Queen Street West to emcee a brunch at Parts & Labour for the VISA Infinite dining series. I’m not a natural bruncher – never have been – though not because I disapprove of the conflation of breakfast and lunch, either linguistically or gastronomically. It’s just that when I was a busy restaurant critic, I tended to work on Saturday nights – and Sunday mornings were therefore more about recuperation than further feasting. But that was then, and these days I can eat when and where I choose, so the chance to taste the brunchular ideas of two of the Group of Seven – Matthew James “Matty” Matheson of P&L and Bertrand “Bert” Alépée of The Tempered Room – was not to be missed. Matty was a wild man in his youth. Now that he’s reached the ripe old age of 33, he has settled down, his businesses are doing brilliantly and he has become an amabassador for the Toronto food scene, spreading the good word across Canada and the States in person and through his excellent blogwork on vice.com. He will have his own tv show next year, on the Vice channel. Bert (The Fifth, Amuse Bouche) is simply (and I use the word ironically of the confectioner’s art) one of the very best pastry chefs we have.

I arrived at Parts & Labour early and found everything poised and ready. The charming little woodstove by the front window was cosily ablaze; a cauldron of hot liquid stood on top of it, perfuming the air in a most irreststible way. P&L’s manager Chantelle Gabino is also a star mixologist and had created an amazing warm toddy for the event – Cinzano rosso spiced with cloves, cinnamon, nutmeg, allspice and bayleaf, mixed with apple cider and two bottles of Woodford bourbon. Then she added rosemary and orange, roasted marshmallow syrup and some rare mas mole biters from Arizona. Gabino called the drink “Into the Wood” and indeed it was the apotheosis of a subtle winter warmer, perfectly balancing citrus, spice and the earthy flavours of bourbon and vermouth. A splendid start.

Propeller Coffee Co. provided the direct-trade coffee (a fruity Kenyan cup) and Krystina Roman of Rosewood Estates was there with her wines – a lively Pinot Noir and a buttery Chardonnay – and a sensational off-dry mead that came into its own in the later stages. She also provided the honey that Bert whipped into the butter he set out with some of his own treasures – a mountain of croissants (some plain, others almond or chocolate – or both), buttery brioche, and bowls of chouquettes, the bite-sized, sugar-crusted balls of moist chou pastry that used to stand on the counter of the patisseries he knew as a boy in France. In lieu of jam, he proposed a smooth compote of the year’s first forced rhubarb, all shy and tender, pink and tart and never been out of the greenhouse.

Those were for our first course. The main dishes arrived family style, the way Parts & Labour serves these days, and the list of them on the printed menu read like a rich, buttery, syrup-slathered poem. This was not one of those brunches where you get a skinny omelette and a piece of unripe melon. No indeed…

First out of the kitchen were platters of meat, the legs of achingly delicious little milk-fed Gaspord piglets from Les Laurentides in Quebec. Matty had brined the legs then set them to roast very slowly overnight – at about 200 degrees – so when he opened the oven this morning there they were, the flesh as tender as butter, the skin golden-brown, crispy and glistening, sitting in their own rich fat. He took all the meat off the bones and piled it up with shards of the crispy crackling. Under and over, he spooned a classic sauce gribiche (Matty cut his teeth working at Le Select and La Palette and knows from gribiches), a piquant slurry of chopped egg white and egg yolk with a brunoise of red onion, capers, celery, cornichons, garlic, lots of orange zest, chervil, tarragon, parsley, Dijon mustard, olive and canola oils – rich but tangy and the perfect condiment to the pork. He did not ignore the fat that was left in the roasting pan with all those scrumptious little dark sticky bits. Instead he whipped them up into a gloriously unstable emulsion and spread it on toast made with Simon Blackwell’s Blackbird Bakery sourdough baguette. Not so much gilding the lily as larding it.

Then there were pancakes. If you haven’t seen Matty’s pancake-making video on vice.com, you really should. It makes for compelling viewing. He makes a persuasive case that his are “the best fucking pancakes in the world” and I’m not going to argue. Apparently some kid was watching the video and called his Dad in to watch. His Dad was producing commercials for the Super Bowl, loved Matty’s attitude – and that’s how Matty Matheson ended up being seen by 115 million people on Super Bowl Sunday. Today, he stacked his pancakes up, put excessive amounts of butter on top and then drowned them in 70 brix maple syrup. This is an awesome maple syrup from Gaspé that gets boiled down for 20 minutes longer than ordinary humdrum maple syrup so it’s really thick and really sweet. Matty explained it to me by saying it was like the amps in Spinal Tap that go up to 11, not just 10. A fitting robe for those pancakes.

And what would any brunch be without whole lobes of foie gras? Matty roasts them in the oven, basting them with their own melting fat until they are almost liquid. Then he lets them rest a bit and recover, before slicing them up and smothering them in a compote made like a mostarda with the last of the season’s persimmons and a handful of pink peppercorns, thinned down with more maple syrup. People were spreading the foie onto whatever croissant and bread was left, and gasping with pleasure.
There was more… A classic potato gratin made with Emmenthal and shallots, thyme, cream and pepper. Hot quiche-like tarts of confited fennel and confited leeks in a royale of eggs and cream baked in a high-rimmed pastry and topped with an orange and fennel salad as the morning’s token vegetable moment. 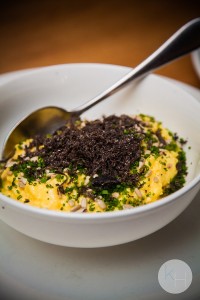 And of course there were eggs, soft-scrambled in a double-boiler so they stay loose and laid-back – jazz eggs, as ever there were – topped with toasted sunflower seeds and half a kilo of black truffles. Matty doesn’t slice the truffles; he uses a rasp so they end up as finely shaved as bonito flakes, stirring in the heat from the eggs and releasing a little cloud of earthy, truffly, funky fragrance that just hovers over the dish. The secret ingredient is a remarkable sunflower oil that he sources through Société Orignal, the brilliant Quebec company that provided many of the morning’s ingredients. Apparently, they dry out the sunflower seeds on a bed of hay on the top of the barn under a sun roof, a treatment that is the equivalent of a day at the spa. Then they cold press the oil. Why yes, it’s expensive – but it’s so good. No bitterness, just the pure taste of sunflower seeds. Matty drizzles the oil over the eggs.

One of the lovely things about having Dairy Farmers of Canada as a sponsor for these VISA events is that the cheese course is always extraordinary. DFC’s own Anne-Marie Rajabali introduced her quartet – Avonlea’s clothbound cheddar from P.E.I. (“grassy yet sweet with an aroma reminiscent of unwashed potatoes”); 5 Brothers Gun’s Hill Artisan Cheese (like a cross between gouda and appenzeller); soft, blue-veined, bloomy-rinded Borgonzola from Ontario’s Quality Cheese; and Laliberté, the ultra-rich triple-cream form from Fromagerie de Presbytère in Quebec. With these we had some fresh little biscuits and herbed cornbread from Bert and chunks of honeycomb from Rosewood’s hives.

And finally, by way of dessert, Bert gave his interpretation of a classic – a Castel au praliné. It’s always fun to try and track down the origin of classic confectionery. Bert didn’t know where Castel au praliné comes from but he was pretty sure it was the South of France. Maybe from Castelnaudary. But there are rival claims! Northern France also claims it, vowing it was invented in 1912, in the last gasp of Europe’s innocence, in the town of Chateau-Thierry in Picardy, by a pastry chef called Leon Hess. He took it to the great exposition in Paris and won a gold medal for it, making his own – and the cake’s – reputation. His patisserie did brilliantly and everyone who came to Chateau-Thierry to see where La Fontaine had written his amusing fables, knew they had to stop and buy a Castel au Praliné from Mr. Hess.

Alas. Sic transit gloria! It all came to an end only two or three years later. By 1916 it was impossible to get the ingredients. The French government eventually closed down all the patisseries for the duration of the Great War. I imagine Monsieur Hess muttering that the worst thing about the First World War was the shortage of butter… I suppose it all depends on your perspective. A year later, the Battle of the Marne took place – right in his town, which may have changed his mind.

Bert’s version was stunning – layers of chewy pecan macaron – somewhere between a meringue and a macaron – a very thin layer of raspberry jam to give a hint of tartness and bring everything to life, a thick band of light hazelnut buttercream, candied hazelnuts and a white chocolate butterfly as garnish, like one of the Duchess of Cambridge’s fascinators.

We ate well. We drank well. We went home to sleep until bedtime. It’s what Sundays are for.

Thank you very much to Ksenija Hotic who took the photos (except the ones of the pork and the Castel). Find out more about her work at www.ksenijahoticphotography.com.