…Yes, the Mystery Wine was white. It was the 2016 Pinot Gris from Fort Berens, a winery in the steep, narrow, warm Lillooet Valley in British Columbia. Off-dry, weighty and aromatic, with rich notes of peach, orange, almond and apricot and a useful underlying acidity, it had everyone guessing (except one of the Judges, Andrew Morrison, who identified it precisely, having drunk it only last week at a barbecue). Most of the rest of us were thinking about Viognier or Riesling – as were most of the chefs, it turned out. Bravo to David Lawrason for finding a real mystery that inspired a fascinatingly broad range of responses from the chefs.

The judges adjudicate this part of the competition blind, sitting in a room where the dishes are brought to them one at a time, not knowing which chef prepared them. The chefs had told me what went into their dishes, but I kept their secrets safe until everything had been tasted… 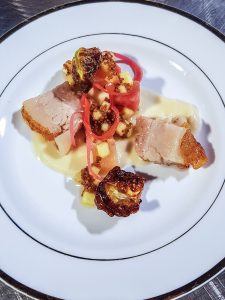 Chef Mooney (Hal) decided to confit pork cheek, leaving the layers of fat and flesh meltingly tender and emphasizing the natural sweetness of the meat, which played beautifully with the residual sugar in the wine. Indeed, there were a number of other variations of sweetness in the dish – diced Ambrosia apples dressed with honey-pickled mustard seeds, for example (predictably yummy with the pork), and also roasted and diced chiogga beets. There was sharpness too, from pickled leeks and threads of shallot marinated with tarragon and olive oil. Brassicas brought in another section of the gastronomical orchestra – deep-fried Brussels sprout leaves adding a note of aromatic bitterness, mollified by a base of smooth white cabbage purée spiked with the mystery wine itself. 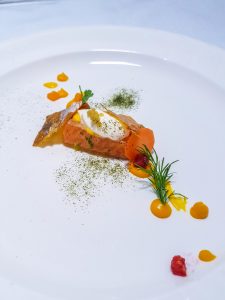 Chef Gonzalez (Mon) took a completely different approach. His exquisitely plated dish starred a slab of arctic char, slow-roasted at 46o until the juices were barely seized in the quivering coral-coloured flesh. Propped against it was a wafer of the fish’s delicate, crispy skin that simply melted on the tongue. Carrots featured three ways – as dots of a silky purée, marinated in brown sugar, cider vinegar and water, and as slim-cut raw dimes. Citrus, too, brought flavour, colour and sharp sweetness in several guises – as dots of clementine paste, and as dice and a brunoise of clementine and blood orange (so much subtler than orange and lemon). On top of the fish was a spoonful of mascarpone spiked with a hint of ginger. A sprinkling of bright green nori dust and fronds of tarragon and cilantro completed the dish. 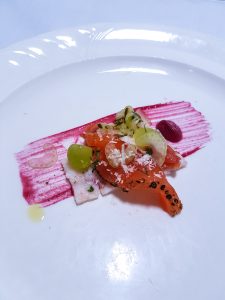 Chef Chartrand (Edm) also chose a rich fish to match the wine’s sturdy body, torching a fillet of lean, raw Pacific salmon and setting it on a sheet of compressed shrimp flavoured with parsley and garlic, its texture as firm as poached scallop. A purée of salted beet decorated the plate and also appeared as a sauce-like condiment, while a pinch of finely grated Parmesan, sprinkled like snow, boosted the salt component, flattering the fish. It was the fruit and vegetable elements on the plate that really reached deeply into the wine – dice of bittersweet, lighty roasted grapefruit, a bean-sized ball of canteloupe dressed with lemon and olive oil, and cross-cut slivers of celery. 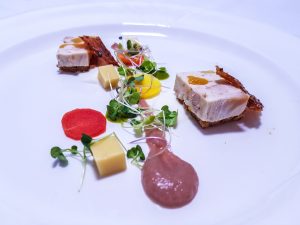 Chef McFarland (Sas) was next. One of the great treats that chefs and judges enjoy at the CCC is the chance for each of us to create our own tea blend – an opportunity offered by a brilliant company called Tea For A Cause (teaforacause.ca), the brainchild of Pierre and Amber Piché. Chef McFarland was handed a pouch of his own Spiced Sangria Infusion (involving black tea, tulsi, orange peel, raspberry, peach, chili and bergamot oil) on Thursday evening and he asked the judges whether he might use it as an ingredient in his Mystery Wine dish. We said yes, so use it he did, to poach chicken breasts which he then turned into a finely textured terrine dotted with apricot and tiny morsels of chicken leg that had been confited in duck fat. Two slices of this delectable creation were presented on crisp buttery crostini and were topped with morsels of the crisped chicken skin. A line of tangy red onion marmalade crossed the plate, flanked by thin discs of rainbow carrots that had been lightly pickled in Champagne vinegar (risky, but the wine held its ground). A loose white mousse of pear and Viognier flattered the wine more obviously, as did two cubes of peach-coconut gelee. Dots of green sauce had the herbal, garlicky tang of a Green Goddess dressing and the dish was finished with a scattering of microgreens. 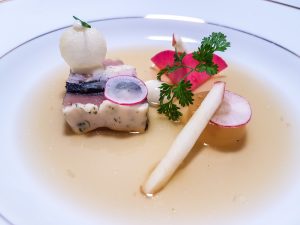 Chef Chen (BC) made a very different kind of terrine, compressing a number of thick layers into a colourful mosaic. Here was albacore tuna, cured in citrus; there scallop and there sidestripe shrimp. A black stratum proved to be jerusalem artichokes cooked sous-vide and mixed with scallop mousse and squid ink. Altogether, the variety of different textures and sea flavours was most impressive. Doll-sized but intensely flavourful garnishes were nicely harmonized. A crispy white bubble of egg white and potato starch sat on top of the terrine, like a visitor from another planet. A bigger, denser sphere was made of apple and mustard gelee (the apotheosis of mustard). Tiny wands of apple offered a sound bridge into the wine, as did a rich fennel crème fraîche. And what was that red, triangular thing far away on the edge of the plate?  A tissue-thin slice of watermelon radish pinched into the shape of a cardinal’s hat. The dish was unified by pouring on an ethereal, pink dashi broth flavoured with sunchoke, shrimp shells and bonito, and finished with radish garnishes and a frond of chervil. 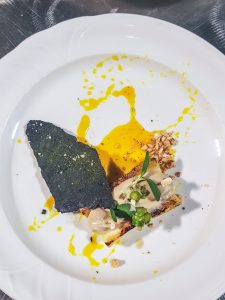 Chef Flann (Cal) took a more robust and more playful approach, imitating a split marrowbone by carving a “bone” out of zucchini then charring and roasting it briefly (its texture was juicy but still quite firm). The “marrow” inside it was a warm, very smooth purée of mushroom, onion, garlic and an oil-based commercial product called Vegan Butter. Bright yellow turmeric gastrique was dramatically offset by a big shard of a firm black cracker made with charcoal and fenugreek. Miniature cylinders of lemon-compressed asparagus and a couple of sunflower shoots brought vegetal flavours to the plate while crushed toasted almonds and enoki mushrooms echoed the earthy flavour of the “marrow.” 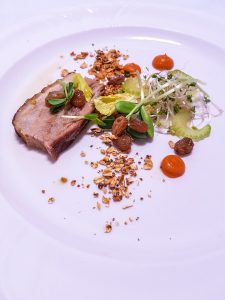 Chef Jewczyk (St.J) chose pork belly as his protein, giving it a quick cure with sugar and salt then slow-roasting it to a state of unctuousness, moistened with a smoked pork and cider jus. Vivid dots of carrot purée spiked with sea urchin almost stole the show, ranged around a salad of Pink Lady apple, micro sprouts, crunchy celery and toasted oats – the variety of textures altogether delightful. Fennel seed and juicy raisined grapes punctuated the idea.

Chef Loseto (Tor) also decided a salad was the solution, with ingredients all commingled so that every forkful of flavours, while subtly different, approached the wine with the courage and enthusiasm of a group. A mixture of succulent snow crab and king crab (all that Kelowna’s superb seafood shop, Codfathers, could supply) was the stand-out protein, speckled with soft quinoa and sidekicked by tiny florets of roasted cauliflower, their flavour boosted with cumin, leek, paprika, garlic and bacon fat. Fresh orange marinated in olive oil and salt called out to the Pinot Gris, and there were many other insruments in Chef Loseto’s band, including mint leaves, baby kale, toasted almonds, raisins spiked with cinnamon and chili, brûléed avocado, caramelized shallots with bacon, and sticks of crunchy carrot. It sounds cacophonous, but Lorenzo knows from orchestration. Beneath it all lay a resonant pool of tarragon crème fraîche subtly flavoured with parsnip and apricot. 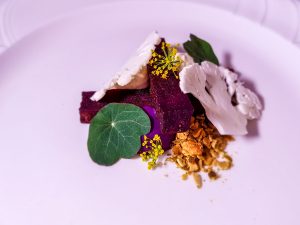 Chef Vinoya (Reg) likes to name his dishes. He called this creation “Anarchy” and consciously set out to defy conventional ideas about matching food to a white of this style. The base of the dish was a mound of pungent soil made from garlic and cacao. Above it were two long rectangular logs of mashed and roasted purple yam – visually most dramatic and tasting something like spiced banana. We found a mousse of cauliflower and cashew “cheese” and a mound of crushed roasted pumpkin seeds. Thin slices of raw cauliflower were dramatically white beside perfect little nasturtium leaves and sprays of yellow dill blossom. In all, the flavours were distinct and self-contained, exotic but harmonious – and the visual appeal was off the chart. 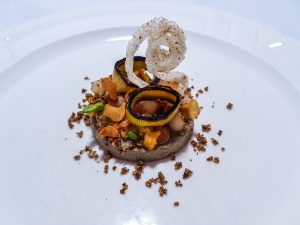 Chef Kim (Ott) produced something equally sculptural and equally beautiful in its way, with a disc of mushroom and pumpkin seed panna cotta as its foundation. Onto this she piled a purée of smoked rutabaga and tarragon, parsnip chips for crunch and sweetness, and charred rings of leek bringing an exciting, bitter flavour to the party. She had used mustard seeds and some of her bottle of mystery wine to poach pears, which she turned into tiny balls. Then she scattered the plate with a crunchy edible soil of toasted rye bread, cashew, fennel, cinnamon and nutmeg. Twisting and turning up from the peak of this mound was a pale puffed rice noodle, like the ghost of a baby snake. 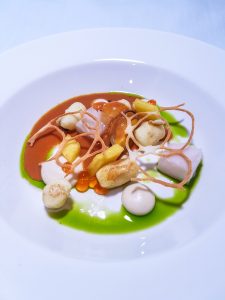 Chef Robins (Win) was the last chef to send in his dish – another stunningly beautiful creation. He took East Coast halibut cheeks and West Coast mussels and brined them in a mixture of caramelized tomato and grapefruit juice, spiced up with Juniper. Then he dried the seafood and cold-smoked it lightly in a haze of applewood. He made dainty Parisian gnocchi and poached them in a court bouillon to set beside the cheeks and two or three squares of crunchy pickled jicama to give textural variety. There were two sauces on the plate, the first a rich bisque made from shrimp and lobster shells infused with dried chanterelles. The second was a charred scallion oil which provided the hint of bitterness so many of our chefs felt was needed to penetrate this wine’s defences. Dots of a stiff cashew and celery root cream added further richness while saltiness got a boost from trout roe marinated in simple syrup, mirin and fish sauce. Balanced over the top, like a fisherman’s net, was a crisply latticed potato-olive-oil cracker.

Outside in the ballroom, the crowd of 400 had made its decision, awarding the people’s choice to Chef Mike Robins from Winnipeg. And yes, it was a super dish. We judges shared our opinions as we handed in our individual scores and waited for the numbers to be crunched. And when the miso dust had settled it was clear that one chef – Alex Chen of BC – had urged himself forward from the pack. Éric Gonzalez of Montreal was a pace behind him. And following him, clustered so close we could barely discern daylight in the huddle, were the other nine chefs. No one had faltered; certainly no one had crashed and burned (as has happened in other years). Was it the most impressive Mystery Wine showing of the last dozen years? All things considered, it was certainly in my top one or two.

Ah, but what would the Black Box bring?