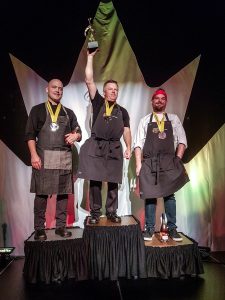 And suddenly it was September 29th and everyone was hurrying to Moncton, New Brunswick, for the first-ever iteration of Canada’s Great Kitchen Party! It is a series of events that stands upon the shoulders of a giant – a dozen years and $15 million raised under the old identity – but, like a super-hero reborn with a new name and a brand new spandex cape, last night it soared instantly into legend. The vibe is different from years gone by – a little more sassy and casual, faster – with a great deal less speechifying and much more music. If it’s coming your way in the weeks ahead, you are in for the treat of the year. This was the first time we had staged an event in Moncton and we drew our chefs and athletes from the entire province as well as from neighbouring Prince Edward Island; the sold-out crowd of 530 really didn’t know what to expect, but they had surely come to party. Our venue was the stunning, two-week old Avenir Centre. The night before, the Moncton Wildcats had won their first hockey game in the arena, but they covered the ice with boards for our event, glamorous celebration tables stretching between the blue lines.

Canada’s greatest sportscaster, Scott Russell was our dazzling emcee, introducing a room full of Canadian athletes  led by Marnie McBean (multi medalist and athlete mentor) PEI born Heather Moyse, and another local favorite, pro baseball player Rheal Cormier. And did I mention there was music! The great Jim Cuddy and his friends and relations gave us a rock concert of four sets such as we never saw in the old days, ending the evening with a powerful and joyous energy that had a hundred people dancing in the aisles while the chefs and athletes joined the band on stage. Jim brought an amazing lineup of stars, featuring the legendary Barney Bentall, the delightful Danny Michel, New Brunswick’s very own incredible chanteuse Lina Boudreau, goddess of the fiddle Anne Lindsay, rockin’ guitarist extraordinaire Colin Cripps, Juno-nominated Devin Cuddy on keyboards, Sam Polley powering it on rhythm guitar, and Sam’s own band-members adding a rhythm section that took everything to a new level, with Tally Ferraro on bass and Gianni Ferraro on drums.

By the time that side of the show got going, the guests had already sampled the dishes from our nine competing chefs. I was enormously impressed by the levels of quality, imagination and impeccable detail on every plate. For a scallop lover, it was a positive orgy of pleasure with all but two chefs including superb local pétoncles in their creations. Who could judge such riches? I’ll tell you who. We have two Senior Judges for our New Brunswick/P.E.I. competition, both leading lights of the culinary community and both chef instructors at NBCC – Chef Evan Smith and Chef Emmanuel Charretier. Also joining us on the panel was Chris Aerni, chef and owner of the Rossmount Inn in St. Andrews, NB. Long ago in Ottawa, he and I sat together on the Governor General’s Awards in Celebration of the Nation’s Table – and it was an honour to sit with him again. As it was to judge alongside Susan O’Keefe – lawyer, mentor, passionate culinarian and co-owner and co-chair of the annual World Wine & Food Expo – the largest wine event in Atlantic Canada. The expert team was rounded out by local superstar Chef Stefan Mueller, Executive Chef of the Windjammer Dining Room in Moncton’s Delta Beausejour hotel. My profound thanks to all of them for volunteering for KP duty!

The marks we awarded were close – gold and silver separated by less than one percentage point – but our final decision was unanimous. Taking the bronze medal was Chef Alex Haun of Kingsbrae Garden in St. Andrews, NB. He chose to work with some splendid steelhead trout, presenting the fish in three separate ways, braiding any number of rich flavours and varied textures. One element offered a finger of cured trout (nice and firm and the colour of Pacific salmon) set on top of a dab of bacon-butter hollandaise on a sturdy, crunchy turnip-and-potato pancake. Beside that was a dainty phyllo cup brimming with a gently flavoured horseradish cream, a pillow for exemplary trout roe, the tender eggs looking like a scattering of rubies. The third component was a slice of moussy, pungent smoked trout paté set on a flaky pastry cracker and topped with green cattail pearls. Garnishes galore added visual appeal – purple flower petals, red amaranth seedlings, cured and crumbled salted egg yolk like golden powder, a single nasturtium leaf and a crunchy chicharon to provide yet another textural hit. There was a lot happening and Chef made a fine choice with a bubbly that proved to be universally refreshing – Pelee Island Winery’s 2016 Lola Rose Sparkling – its inherent fruitiness amplified by the flavours of the dish.

We awarded the silver medal to Chef Matt Pennell of Legends, in Moncton. Visually highly dramatic, his plate was based by a large but paper-thin slice of a terrine of octopus “bacon” that was delicately textured, subtly delicious and looked as beautiful as porphyry marble. Beside it towered a mound of scallop aguachile, something like a creamy ceviche, with chopped raw scallop tossed with a sauce scented with plenty of fresh lime juice and chilies from Chef’s own garden. A golden fried polenta puck on the plate was a perfect foil to the aguachile, and held its own secret – dried “sea truffle” – a local barnacle-type seaweed that brought a unique marine flavour to the cornmeal. Finishing touches each added their own relevant nuances to the dish – dots of tangy apple-basil gel; even smaller dots of sapid fennel purée; arugula and lemon basil microgreens scattered over the scallops; and a single roasted organic grape tomato (what a wickedly juicy little flavour bomb). One last detail was also the most flavourful, packing a real umami punch – nibs of cured and dehydrated black olives that kicked in beautifully when dragged into the aguachile. Chef’s chosen wine was another brut rosé bubbly, the always delectable 2015 Sparkling Rose Cuvée from L’Acadie Vineyards in Nova Scotia – biscuitty, fruit-forward and sophisticated.

Who won the gold? Who will be Moncton’s first champion and the first contender for next February’s Canadian Culinary Championship in Kelowna? Chef Irwin MacKinnon of Papa Joe’s Restaurant in Charlottetown, P.E.I. He began by painting a broad runway of toasted-miso-butternut-squash purée across the plate. At one end he set a whole, immaculately seared scallop, pale and quivering inside its golden crust and dusted with a tiny suggestion of black garlic salt. Beneath it was a spoonful of slaw made with a medley of finely julienned vegetables and flavoured with sesame and ginger. At the other end of the squash purée highway, a piece of beef rib bone served as a plinth for a glossy, spherical parcel of deeply flavourful, admirably moist braised P.E.I. beef short rib, wrapped in a membrane of savoy cabbage. Strewn between these two edifices (the apotheosis of surf ‘n’ turf) were all sorts of treasures – supple golden chanterelles Chef had foraged himself then lightly pickled; softly roasted miniature candycane and golden beets; fresh sweet peas and their seedlings, bringing their own lively green taste. Yellow dots of spicy sweet potato purée and black dots of fermented black garlic purée were the ideal condiments. Two lotus root chips brought crunch and visual appeal. As a dish, it united so many of the region’s best culinary ingredients – and Chef’s beverage match was inspired – the forthright, citrussy, hoppy Go Devil American IPA from Upstreet Craft Brewery, P.E.I.’s latest microbrewery.

Chef MacKinnon will be warmly welcomed in Kelowna – our first champion of the year, from our first-ever visit to Moncton, for our first-ever Kitchen Party. As for me, the enormous tattoo of the three-letter acronym by which our organisation was known in years gone by (inked in navy blue copperplate script in a place that only my wife and my tailor have ever seen) must become a souvenir of the past, its place on my life-list of meaningful initials now superseded by KP – Canada’s greatest-ever Kitchen Party!