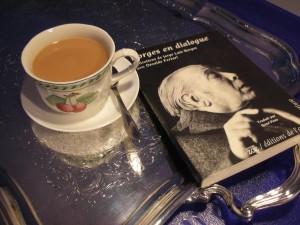 Later, as I stood before the mirror in the hotel washroom, rinsing the whipped cream from my lapel and picking the sticky crumbs of sponge cake from my hair, I had tried to find some rationale for the catastrophe. That B had used me (a fact that still seems neither flattering nor shameful) was self-evident. But it was not until I received his letter that I began to understand the mechanism of my undoing. Written in the Argentinean’s myopic and labyrinthine hand (and prefaced by an apology that even now astounds me with its hypocrisy) the fifty pages of airmail bond have demanded considerable abridgement. I share what is left without hesitation: the laborious fruits of one man’s obsession with the discreet geometry of afternoon tea.

“… Inevitably (and in using this word I reveal my allegiance to mathematics, my disdain for historical process) the move to England was to dissolve those early preconceptions. There, teatime was no moribund habit, but a vibrant, breathing force. Each day at four o’clock, as if at the call of some invisible muezzin, the entire population of the southern counties would lay down their pens, their tools, even their cricket bats, arresting the hard-won momentum of the afternoon, and abase themselves before the kettle. Alone in that dim and fragmented island, the need for tea transcended class and gender, age and creed, in its perplexing unanimity.

“To understand the source of such power became my lifework. For thirty years I toiled with calipers and notebook, awed by the ubiquity of my subject and bewitched by the multiplicity of its configurations. I mapped its infiltration of childhood, from Alice, Pooh and Mr Toad to the disreputable heroes of The Beano and The Dandy; I followed it to the London zoo, where the intelligence of chimpanzees was routinely demonstrated by their ability to take an orderly tea. I recorded its infestation of the modern drama, from The Second Mrs. Tanqueray, through Wilde and Barrie, to the atrocious mysteries of English farce. To this day, no episode of Masterpiece Theatre may be aired unless it contains at least one scene with scones, the dialogue around the tea table brittle with a subtext of romance or innuendo. I plotted the cultural vertices of teatime from baptism to wake, and I would be in England still, filling my journals with an endless diversity of forms, had I not seen my folly. In all those years, I had come no closer to the underlying matrix of the event. I had been drawing snowflakes, marvelling at their individuality, but I still did not know why it snowed.

“So I left England for the distant vestiges of empire, seeking more accessible, more quiescent teatimes. My first reaction was one of horror, not at the quality of the food and beverage, but at its bewildering uniformity. In the sunshine of innumerable afternoons I discovered that all hotel teatimes are identical. Spreading my napkin from Hong Kong westward to Vancouver, I hoped in vain for Bengal sandwiches or anchovy toast, winkles with vinegar and brown bread and butter, crumpets, flapjacks and Chelsea buns, malt loaf, chocolate fingers, Fuller’s walnut cake or so many more of the profuse delights of the humblest English table. From hemisphere to hemisphere I was simultaneously charmed by my surroundings and terrorised by the monotonous asceticism of the diet: a quartet of tiny sandwiches, two scones with jam and cream, a plate of cakes and cookies. Nothing more.

“And therein, of course, lay the solution to my quest. I had erred in seeking a domestic bounty. Distanced from the motherland, shorn of its infinite variety, the soul of teatime is laid bare. That minimalist menu is an index, a conscious abbreviation, an umbelical link between the expatriate Englishman and his nostalgic heritage. Sitting down to tea at an alien table, he is not seeking sustenance; he is uttering a silent mantra that will connect him through time and space with his birthright.

“It only remained for me to prove my thesis with an independantly repeatable experiment. I scanned my limited acquaintance for an appropriate guinea-pig. I thought of you, a penniless British emigré who by his own admission has not had a proper tea for years. It suited me that you were living in Toronto, a city built upon the rock of Anglo-Saxon tradition. For better or worse that rock has been eroded, until it looms no larger now than any other tessera in the multicultural mosaic. Here teatime too has dwindled, shrinking to the stature of an ethnic curiosity, its range restricted to the meticulous lounges of a handful of grand hotels.

“I visited them all and noted down my unworthy and pedantic disappointments. At The King Edward I found the sandwiches too buttery; at Sutton Place too larded with cream cheese. The Windsor Arms squeezed too many customers into one small room and the Four Seasons was too public for my subtle intention. At last I decided on the Intercontinental. There, as you doubtless remember, seated in elegant comfort before an open fire, we were permitted to choose from a dozen types of tea correctly served in generously proportioned pots. The sandwiches were soft albino dominoes, the cakes as small as canapés, the currant scones still warm from the oven and the cream as close to clotted as one gets this side of the Atlantic. Furthermore, the hotel’s name was ominous, redolent of motion, dedicated to the coordinates of space. If ever a tea was to conjure home thoughts from abroad, this was the one.

“You vindicated my theory with a vigour even I had not anticipated. I confess I toyed with you initially. My recitation of Rupert Brooke’s self-indulgent doggerel was intended as a clue to the proposed relationship of tea and time. The final couplet, “Stands the Church clock at ten to three? And is there honey still for tea?” might have alerted a keener intellect to my purposes.

“But by then, I suspect, your mind was already engaged. The ritual words and gestures of the teatime ceremony had gained access to the collective memory of your race. I had only to lift the pot of orange pekoe from the tray and ask “Shall I be mother?” to thrust you headlong into vertiginous remembrance. I believe I know the images you witnessed as you toppled forward onto that delicately laden table: a litany of teatimes past… Trudging home after a long walk under a winter sky, with the rooks wheeling over ploughed fields and the red sun low between the trees: hungry for buttered crumpets before a blazing fire… Sitting in the palm court of a hotel in the Strand, extricating an eclair from its sticky doiley while a string trio plays behind the aspidistras and your aunt complains about the price of hatpins… Stepping slowly across the murmurous lawns on a hot and soporific summer’s afternoon to a rug spread out beneath a willow tree, bearing a tray of cups and saucers, raspberries and cream… A vision of a tall table in a nursery, set with marmite soldiers and oblong fingers of yellow madeira cake, dainty blueprints of innumerable futures… And from your most remote pre-history, the prototype, the only really perfect tea that any of us ever knows: a meal of air served on makebelieve plates to a circle of teddy bears.

“Teatime’s clarion awoke these intricate and dormant phantoms from forgetfulness. I apologise for the condition of your jacket. In your discomfiture lay my triumph and the longed-for exorcism of a dream.”