A new store opened in Kensington Market about six weeks ago – Easton’s Charcuterie and Prepared Foods. It’s the brainchild of Derek Easton, formerly one of the team at Sanagan’s Meat locker, just around the corner on Baldwin, and its purpose is to provide the neighbourhood with an impressive variety of local charcuterie, artisanal deli meats and a superior line of house-made prepared foods. A veteran cook who worked at Mistura and Auberge du Pommier before specializing in meats, Easton has exactly the personal connections to find smashing product and, judging by the line-up at the till this afternoon, he has also found an eager clientele.

What does he offer? A couple of dozen different kinds of charcuterie to begin with, including real Parma prosciutto, Spanish chorizo and real, spectacularly delicious, garnet-coloured Serrano ham, all at bargain prices. Other treats, including gently spiced soppressata, pungently salty smoked duck prosciutto, wild boar prosciutto and richly flavoured venison sausage, come from Seed to Sausage, a small company north of Kingston, together with a wide range of the excellent salumi from Romagna Mia restaurant right here in Toronto.

Easton also makes super sandwiches (a brisket melt looked awfully tempting) and his partner, Jade Kay Pollack, provides a range of ready made South East Asian curries plus invaluable basics such as duck fat, veal demi glace, vegetable stock, duck confit, and many other delights. Jars of Bumpercrop preserved vegetables and pickles from McClure, out of Detroit, will also pry the coin from your pocket.

And what should one drink with this array of carnivorous treasures? I stumbled upon a most successful pairing – Lillet Rouge on the rocks. Lillet, of course, is that vermouth-like elixir from Bordeaux, best known for its white version (a key component of the Vesper, James Bond’s original Martini from Casino Royale). The red is just as delicious, mildly herbal, verging on sweet, tasting of red fruits shot through with bitter orange and a hint of quinine. 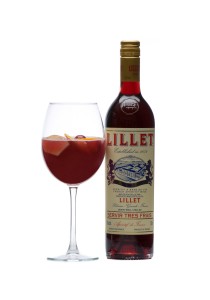 Somehow it works remarkably well with the charcuterie, zeroing in on the spicing in the sausages while supporting the natural sweetness of the meats and using its citrus element to soothe the saltiness. Lovely stuff.