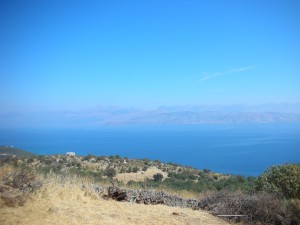 Three weeks at our mountain hideout on Corfu seemed like a generous run of days when we first arrived but it slipped away all too quickly. Still, the beneficial effects linger for a while – about as long as a tan lasts, perhaps. There was a little work to be done on the house but not much that couldn’t be postponed for another year, so we turned our attention to our land, the steep little acre that drops away from the terrace into a valley, its contours smothered by an unbroken counterpane of olive trees.

We have neglected our own 11 olives shamefully. Indeed, the last time I really got to grips with them was more than 25 years ago and they were badly in need of attention, tall and shaggy as John the Baptist. But first there was strimming to be done, to get through to the trees, wading through a chest-high sea of yellow stalks and plants. Enter Themistocles the gardener, an Albanian from the next village, who knew exactly what needed to be done.

The first day was a strimming day and when we could once again stroll down the slope without fear of vipers I watched him take a hatchet to the forest of shoots that had sprung up from the base of each tree. He was ruthless with our litle grove of plum trees – tall, willowy trees that give little fruit to anyone but the wandering wasps – why would they when they have been abandoned for so long? He pruned them right back, making me gasp at his ruthlessness. We shall see what happens next July. When we lived here year-round, a long time ago, we made vast quantities of splendid jam from the purple plums. I think I wrote about it in A Kitchen in Corfu, my first book about the island, republished this year in England, incidentally, without any fanfare at all.

The second day was the olive tree armageddon. A short back and sides. Themis clambered nimbly into each tree, scampering up and out onto branches that I (plagued by vicarious vertigo) was certain must break. There was dead wood to trim, whole branches to lop off, the whole crown and centre of each tree to be clinically sawn away to let in light and air. In the end there was more olive wood on the ground than growing. “Next year,” said Themis, “they will be bushy with new growth and you will have another good crop of olives.” Even my koumbaros, Philip, agreed that the job had been done pretty well when he came to lunch later, bringing two litres of his own red wine (another very good year) and two bottles of the precious Champagne he makes in his apothiki.

It took me a day to drag the fallen olive foliage into six huge piles, each twice as tall as me. Themis will come back in October, after the early rain of autumn, and burn it all.

My own little project lay in a particularly forlorn corner of the land, where the low dry-stone wall that separates us from the neighbour’s unoccupied property had been tumbled by time. No one has lived there for 50 years and the garden is a towering tangle of brambles, like a wave that threatens to engulf our slopes. Cutting through the brambles, pulling the prickly ropes down out of my olive tree, sawing away dead wood, letting in the sunshine, I found an unsuspected little greengage tree struggling in the middle of it all. I trust it will do better now, with the wall repaired and the brambles (temporarily) pushed back.

As far as flavours go, there was one new highlight this summer. Our good friends Horst and Yutte have a house on the other side of the ridge. (We have the dawn, they have the sunset view.) Retired now, they spend most of the year here. They brought their delightful family for dinner one night and brought gifts, too – a bottle of the dark purple grape juice Horst presses from his vines, and a little jar of dried oregano flowers… 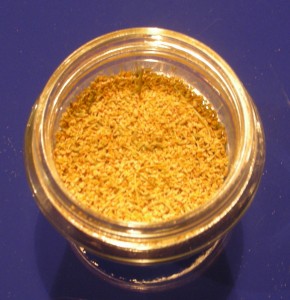 And something else altogether wonderful. Earlier in the summer, Horst had harvested wild fennel flowers on the hillsides, brought them back to his kitchen and, with a scientist’s care, shaken out the pollen. He gave us a jar of it – no more than two tablespoonfuls of the precious golden dust. I have never smelled anything so aromatic or so quintessentially explicit of the scent of fennel. A princely present, like something out of a fairy story where the innocent hero is warned to use it sparingly and wisely. Its magic was apparent the next day. I was tossing some tiny baby squid in a frying pan with nothing but a little olive oil – just two minutes to crisp the tentacles and bronze the pinky-sized bodies – and I sprinkled on a tiny pinch – a scruple of the pollen. Unbelievable. Its fragrance filled the kitchen; its flavour charmed our tongues. A noble gift indeed.