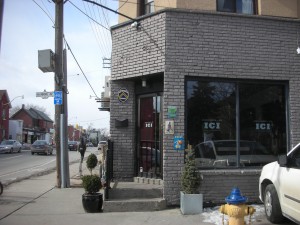 I dropped into Ici Bistro this morning, invited by chef-patron Jean-Pierre Challet, who had some news he wanted to share. J-P and I have been in conversation, off and on, since about 1988, when he was chef of the Inn at Manitou and I was just starting out at Toronto Life, and I am always interested in what he has to say. On the quiet north-west corner of Harbord and Manning, Ici has been his domain for the last five years – intimate, charming, casual, 25-seats which have to be reserved weeks – even months – in advance. Everyone loves Ici, including J-P himself. But, come the end of April, he is moving on.

“Sit down while I make us some breakfast,” he suggested, “and I’ll tell you about the plans.”

Here is the gist of it. In May, J-P is returning to The Windsor Arms, the boutique hotel rebuilt and reopened by developer George Friedmann in 1999, with J-P as the original chef. But this time, J-P is going in with a different concept, basically moving his successful Ici into the recently redecorated restaurant space beside the Courtyard. Instead of 25 seats, he will have 40, but Ici’s brigade travels with him and so does his philosophy of “bistronomy” – together with the reasonable prices that have always made Ici such good value. He’ll be cooking there four nights a week, in person, and taking occasional weeks off to carry on with the renovations of his farm near Lyon in France.

And another thing – Friedmann is backing him with a retail bakery in the old market space opposite CityTV on Queen Street West. J-P’s famous croissants will be for sale there along with a glorious selection of quiches and fruit tarts and pies – a huge treat for a part of the city that is so poorly served with top-quality bakers and patissiers.

And Ici…? J-P isn’t sure. He intends to retain control of the space, maybe install a protégé behind the stoves… We must wait and see.