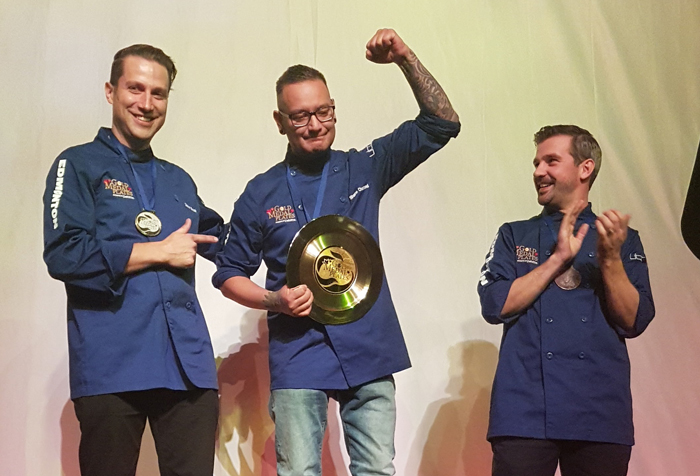 Gold Medal Plates kicked off its new campaign last night in Edmonton with a sold-out crowd of 770 guests and a party for the ages. The great Scott Russell was our thoroughly charming MC, coaxing amusing, candid and inspiring stories from the Olympic athletes on stage. We heard rip-roaring rock from our posse of musicians – Neil Osborne of 54/40, Geoffrey Kelly of Spirit of the West, Dustin Bentall, Sam Polley and Devin Cuddy – and our auction trips sold like hot cakes. As for the gastronomical component, it was stronger than ever as Edmonton continues to evolve as a food city and a new generation of young chefs come home from their travels to open up exciting new restaurants. Last night’s dishes were notably sophisticated and imaginative from all competitors but the judges were unanimous about who deserved to step onto the podium. Who were those judges, you ask? Our panel was led by Senior Judge Mary Bailey, the food, wine and travel writer, certified sommelier and publisher of The Tomato Food & Drink. Sharing the table was Chef Chris Wood of Maclab Hotels and Resorts; chef, author and owner of Kitchen culinary studio, Brad Smoliak; pastry chef extraordinaire, culinary Olympian and educator, Clayton Folkers; food writer, travel writer and restaurant reviewer with CBC Edmonton, Twyla Campbell; and of course last year’s gold-medal-winning chef, Eric Hanson of Prairie Noodle Shop.

Our bronze medallist was Chef Ryan Hotchkiss of Bündok who gave us a subtly delectable crudo of New Zealand sea bream, a splendid fish caught less than 24 hours before it reached our plates. Chef gave the fillets the lightest of salt-and-sugar cures then dipped it into ice water to mantain its pristine texture. He sliced smooth white petals of the fish into three little mounds on each plate then dressed them with a delicately flavoured but voluptuous vinaigrette made from a reduced stock of the smoked bream bones, spiked with a hint of rice vinegar and some neutral pomace oil. Strewn around these tiny mounds was a brunoise of fresh Elstar apple, dots of a piquant, bright red hot sauce made with chilies and apple juice, and fragments of Thai basil leaf. A trace of olive oil, lemon juice, coarse salt and a kind of togarashi made with basil seeds instead of sesame completed the plate. The seasoning was forthright but the final flavour experience was that of the rich, sweet flesh of the sea bream itself. Chef’s wine was an excellent match, picking up the citrus and basil on the plate – the 2016 Spice Jar from Lake Breeze Vineyards on the Naramata Bench, a tangy, slightly off dry, seriously aromatic blend of Gewurztraminer, Ehrenfelser, Schönberger and Viognier.

Steve Buzak, Executive Chef of the Royal Glenora Club, won the silver medal with a pressed braise of Tangle Ridge lamb neck. The little puck of meat, deftly touched with warm spices and herbs, was moist and succulent and half-surrounded by a silken purée of sweet potato. Stealing the show for most of the judges was an impeccably textured croquette made of soft taro root, foraged mushrooms and a little Winding Road RDB cheese. Saskatoon berries poached in their own gastrique added acidity to the creation, while shreds of basil brought a herbal note. The dramatic garnish looked like crumpled cellophane but tasted of its true self – potato chips, turned translucent through some molecular devilry. Chef found a great match for his lamb in Meyer Family 2015 McLean Creek Road Pinot Noir, a Burgundian-style Pinot with the perfect weight for the dish. Interestingly, the original Meyer family comes from Edmonton and were members of the Royal Glenora Club, in their day.

Chef Shane Chartrand of Sage won the gold medal by almost ten percent – the largest margin of victory I can ever remember at a Gold Medal Plates event. This was Shane’s seventh time competing with us and though he has frequently reached the podium, it was his first gold. His colleagues were as pleased as the crowd and the whole room gave him a standing ovation. His dish was a visual stunner that he entitled “Effects of Red.” He began the plating by putting five dots of red plum sauce onto the plate; then he turned the plate on its edge so the droplets of sauce became red streaks a few inches long. Then came larger dots of a rich and tasty almond-and-parsnip custard, scarlet balls of red-wine-poached pear, and slim coins of beet-stained, salted rutabaga. Against these rooty, fruity background flavours he set his two proteins – little rectangles of a dense but juicy terrine of pheasant breast enriched with pork neck fat, and beside them tiny drums of foie gras torchon, sprayed with a mixture of beet juice and cognac to perpetuate the “red” theme. Finishing touches were shards of black coral gami, like dark crimson snippets of lace but as crisp as melba toast, made by frying a watery batter on a very hot surface. Chef’s wine match did not let the side down – indeed, he explained that he had started conceiving of his dish with the wine already chosen: the 2015 Tantalus Pinot Noir. It worked particularly well with the pheasant and the roots – such a well-judged marriage.

So, huge congratulations to Chef Chartrand! We will see him in Kelowna next February. The new campaign has begun. Next stop, tomorrow night in Regina!