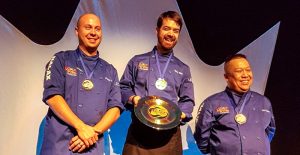 Such a pleasure to be in Halifax again! Especially on such a warm and sun-drenched afternoon, the grey ocean looking most complacent from my hotel window. There is always so much going on here – with the burgeoning Nova Scotia wine industry, with new restaurants opening up hither and yon, with energetic local farmers and fishermen producing tip-top materiel upon which the local chefs can exercise their knife-skills and their imaginations. This year, Halifax was the first city to sell out in terms of ticket sales and among the crowd was a high-powered contingent from Moncton, New Bunswick. In 2018 we will welcome Moncton as the latest Gold Medal Plates city, drawing on all of New Brunswick and Prince Edward Island to find our competing chefs. The delegation was here to see how a GMP event goes and they lucked into a particularly great evening. As our scintillating MC, Scott Russell pointed out, the energy in the Cunard Centre was intense, and it was whipped up into a heady froth of delight by our brilliant super-band of 8 (count ‘em – 8!) headline musicians, including Jim Cuddy, Ed Robertson, Barney Bentall, Danny Michel, Jeremy Fisher, Anne Lindsay, Sam Polley and Devin Cuddy.

I like to think our posse of culinary judges was equally impressive. We were led by journalist and restaurant critic, Senior Judge Bill Spurr, joined by sommelier, educator and passionate culinarian Amy Savoury, chef and educator, Ted Grant, multiple gold-medal winner and now a permanent part of the judges’ roster, Chef Martín Ruiz Salvador of Fleur de Sel in Lunenberg, and, of course, last year’s gold-medal-winning chef, Mark Gray, not yet 29 years old but already Executive Chef of The Brooklyn Warehouse, ACE Burger Co. & the Dartmouth Beer Bar & Eatery, Battery Park. The competing chefs were a strong group, too, and it was a pleasure to devour their work and then, after some rumination, to come to the following unanimous conclusions.

Our bronze medal went to Chef Ivan Chan of The Orient Chinese Cuisine. He entitled his dish (somewhat obliquely) “Just Another Chinese Combo – Combo #1019” and presented three suave and elegant interpretations of classic Chinese-Canadian treats. There was a morsel of pork belly, its layers of fat unmelted and trembling, its layers of lean tender and sapid, its skin as crisp as any crackling with a mahogany soy glaze. A soupcon of dark sauce beneath the meat turned out to be a black vinegar reduction to cut the fattiness of the belly. An egg roll the size of my index finger was perfectly fried, crisp and warm and filled with a stuffing of Nova Scotia bison meat. The third element was a dumpling that Chef Chan called “Four Seasons Wealth”, its open top divided into four compartments filled with very finely chopped vegetables and mapo tofu of different colours, each pocketful representing a season. The dumpling skin was becomingly soft and the whole mouthful had a delectable white pepper seasoning. A stripe of fermented bean curd paste added rich, salty, umami to the experience. Chef’s chosen wine proved an admirable choice – the 2015 Sauvage Sur Lie from Mercator Vineyards in Wolfville, N.S., a blend of tangy, refreshing Chardonnay and weightier Petite Milo.

Chef Jonathan Canning of Fresh Twenty One won our silver medal. His central protein thrilled the judges – the highly-prized cheeks of halibut, lightly poached in butter but only long enough to seize the juices of the fish, leaving the morsels moist and flavourful. Everything else on the plate served to flatter and enhance. We found steamed littleneck clams with just the right amount of chewiness to contrast with the cheeks. Here were pieces of fingerling potato topped with fennel weed and a brunoise of apple, surrounded by a potato and leek nage. Sea parsley (a wild local herb) was puréed as our green, and another rare coastal plant, a parasitic seaweed called oyster thief, shaped like a tiny bright green tuning fork, was scattered here and there. Crispy half-tubes of brioche toast provided delicate crunch while a final addition of rich veal jus proved once again how yummy a meaty demi-glace can be with the right white fish. Chef’s wine was another super choice – the sparkling brut rosé from Benjamin Bridge, crisp, refreshing and possessed of a hint of salinity that worked brilliantly with the halibut.

Chef Barry Mooney of Gio won the gold medal. His dish looked spectacular – a slim slice of ham hock terrine, draped elegantly from the rim of the bowl down into its centre, crowned with all sorts of treasures. Chef finished the dish at the judges’ table, pouring on a warm, golden pork consommé with a marvellously meaty fragrance. It had the happy effect of loosening the texture of the terrine and releasing its flavours. Meanwhile we were busy exploring the other elements of the dish. Chef might have merely chopped up a scallop to include as a garnish; instead he puréed it with lemon zest and parsley then poached it sous vide. Then he chopped it up and included morsels of it on the terrine runway. Beside it were tiny bricks of foie gras mousse, a brunoise of lightly pickled carrot, miniature sheets of haskap jelly, dots of carrot purée and a garnish of fennel fronds. The final flourish was a crunchy lacework tuile of squid-ink batter adding crunch and salty umami to the delicious creation. Finding a wine would have been a challenge, but Chef took another route, creating a cocktail he called The Great Reward, using gin, tomato, peach and basil. The dish brought out the peach particularly well.

Chef Mooney will be coming to Kelowna in February, the fourth of this year’s champions. Tonight, St. John’s!