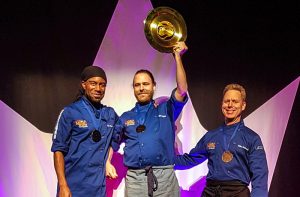 To Winnipeg, where our improbably sun-drenched tour of Canada finally encountered the first real intimations of winter – a dusting of snow on the ground – bare trees under a chilly white sky. The Gold Medal Plates party was the ideal antidote, one of the best of the campaign, irresistibly emceed by the inimitable Marnie McBean with music provided by a constellation of stars – Jim Cuddy, Danny Michel, Jeremy Fisher, Anne Lindsay, Matthew Harder, Rebecca Harder, Sam Polley and Devin Cuddy. And for each musician, we of the gastronomical persuasion fielded a matching judge led by chef, educator and nationally recognised baker and culinarian, our Senior Judge, Barbara O’Hara. Judging with us was Chef and educator, senior judge emeritus, Jeff Gill; award-winning writer and broadcaster, Arvel Gray; writer, critic and author of this brand new and brilliant book Out of Old Manitoba Kitchens, Christine Hanlon; food writer, broadcaster and main man at Peg City Grub, Mike Green; culinary guru and purveyor of spectacular food and wine, George Andrews, and last year’s gold medallist, chef Jesse Friesen of the Gusto group of restaurants. We all agreed that our chefs performed exceptionally well and it was exciting to end the evening with three people on the podium who had never been there before.

Heiko Duehrsen of Assiniboine Park Conservancy won the bronze. He presented big, juicy chunks of gorgeous steelhead trout from Stonewall, about 30 minutes outside Winnipeg. Cooking fish sous vide is tricky – the flesh can get so mushy – but chef has the lightest touch, first brining the plump fillets with salt, sugar and pink peppercorns, bagging them with duck fat for such a brief time that the flesh still shone, then flash-chilling them. Sharing the plate were two slices of shiitake mushroom, subtly pickled and scented with pink peppercorns, cucumber ribbons rolled up like tiny green manuscripts and some finely sliced radish. A flavourful purée of smoked green peas and a scattering of baby daikon shoots boosted the vegetable presence on the plate; trout roe, like coral-coloured jewels, supported the fish. Dots of horseradish crème fraîche and of pink peppercorn vinaigrette played the role of condiments and the final, delectably decadent touch was a scattering of Maldon salt flakes mixed with crumbled roasted duck skin. Chef’s chosen wine was unexpected – Mission Hill’s robust Family Estate Reserve Pinot Noir from 2015.

Rob Thomas of Rob Thomas Catering won the silver medal with a dish full of the subtle spices of the Caribbean. His centrepiece was a beef short rib braised very very slowly over an entire weekend in beef stock seasoned with cinnamon and three peppers – pasilla, ancho and guajillo. Chef totally nailed it, for the meat was moist, superbly tender and packed with flavour. Those three chilies also lay at the heart of a dark, cocoa-spiked mole sauce that lay alongside the meat (the judges longed for jars of it to take home). Adding gorgeous dark orange colour and plenty of chili heat, a big stripe of carrot and chipotle purée, scented with lime and honey, decorated the plate, contrasted with dots of emerald green cilantro mojo. Charred corn kernels provided an intriguing sweetness to the dish and slices of okra pickled in cider vinegar with plenty of ginger added extra tang and crunch. As a final garnish, Chef fried plantains and crumbled them over the beef. All these lively flavours needed a wine of considerable substance and Chef Thomas found one – the 2014 Diabolica Red from the Okanagan, a dark, rich blend of Merlot, Petit Verdot and Syrah.

Throughout this GMP campaign, I’ve been struck by how often judges come up with a unanimous (or near-unanimous) winner. Each of us sets down his or her scores independently before they are tabulated so there can be no collusion, but quality is obvious to all. Chef Mike Robins of Sous Sol won the gold medal last night with a perfectly seared scallop – so simple, so delicious, so hard to time for 600 people. The rest of the elements on his plate were anything but simple. Headlining in terms of umami-saturated flavour was a superb sauce – a beurre blanc made from a dashi broth and enriched with miso, Chef’s homemade Dijon-style mustard, lemon, wine and the liquor from the raw scallops. Button-sized slices of zucchini, pickled in apple cider and cider vinegar flavoured with turmeric and mustard, stood upon dots of puréed carrot. A half teaspoonful of pickled mustard seed was carefully judged – not too tangy – while fresh diull fronds and a cool herb oil made with sorrel, dill and chives brought a little chlorophyl to the party. Potato also featured, but in a most unexpected way. They had been put through a Chinese turning slicer, emerging like string, which Chef dyed black with cuttlefish ink, wrapped around a canoli tube and then deep fried into crispy spirals. The wine match was inspired – the bright, complex 2015 Tantalus Riesling from the hilltop that overlooks Kelowna in the Okanagan.

Which is where we will be in February, of course, for the Canadian Culinary Championship, together with Chef Robins and the champions from the other cities we’ve visited on this thoroughly successful campaign. Just three events to go – tonight in Calgary, then Ottawa and Toronto. The fun goes on.