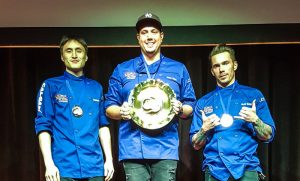 Wham! And suddenly it was winter – a three-day blizzard sweeping over Calgary, temperature 12 below, traffic so thoroughly choked by the year’s first snow that I feared my team of judges wouldn’t make it to the party. What would I do without my Calgary Senior Judge, author, teacher, restaurant critic and broadcaster, John Gilchrist; without chef, culinary instructor and television star Michael Allemeier CMC; without wine educator, food judge and morning show host, Jamie Herbison, and without former Canadian Culinary Champion Chef Ryan O’Flynn? Fortunately, they all made it in time, but we missed our final judge, last year’s gold medal winner and reigning Canadian Culinary Champion, Chef Jinhee Lee of Foreign Concept. She had been called back unexpectedly to Korea by a family emergency, so her colleague and mentor Duncan Ly, himself another past Calgary champion, kindly took her place.

With that all sorted, we were able to enjoy the gala to the fullest! MC Catriona LeMay Doan did a splendid job, keeping the energy fizzing and the crowd of 600 hanging on her every word. When it was time for the music, the biggest band GMP has ever brought together took the stage. In part it was a family affair, with Jim Cuddy and his two very talented lads, Sam Polley and Devin Cuddy matching off against Barney Bentall and his son Dustin Bentall. We were blessed with two sensational fiddlers – Anne Lindsay and Kendel Carson – and Danny Michel bringing a little semi-acoustic action. Barney Bentall is on tour right now and didn’t his band member Rob Becker also show up to provide some electric bass! It was all tremendous fun and I almost felt guilty calling for quiet so I could announce the bronze, silver and gold-winning chefs.

Talking of which, the bronze medal went to past winner Dave Bohati of Teatro, who presented a very beautiful, sculptural dish based around a modern take on a terrine. At its heart was steelhead trout, some of it raw (the belly), some of it cured in yuzu juice, quickly smoked, briefly submitted to sous vide heat and then chopped. Rolled around this delicate, juicy fish was a thin layer of parsnip and then a dense farce of pork shoulder, hocks, belly and head spiked with parmesan, almonds, herbs, shallots and duck fat. Rising like fins from this rich drum of terraqueous delights were bright green shards of tissue-thin “pea glass” that tasted most fervently of peas. Posed across it was a crisp hooped beignet that looked like a fat onion ring but in fact concealed a secret sauce – a stiff hollandaise made with smoked butter that proved the ideal condiment to the pork. A smooth, sweet-and-sour purée of quince, verjus and caramel was the second sauce while dots of pea purée brought their own natural vegetable sweetness to the plate. Garnishes included fresh chervil fronds, fennel pollen and pea shoots. It was a delicious and intricate web of flavours and textures that flattered Chef Bohati’s chosen wine, a dry, pink bubbly from the Okanagan, the 2016 Bella Gamay Method Ancestrale.

Matthias Fong of River Café won the silver medal with a dish that was almost entirely vegetarian and reflected his enthusiasm for locavore dining. At its heart was a scrumptious drum of tender celery root, braised in mushroom broth, sake kasu and a unique vinegar made from IPA beer that had the rancio notes of sherry. Chef had turned this braising liquid into a thick, foamy sauce and provided two chewy rounds of rye sourdough for mopping-up operations. On top of the celery root was a crumble of scandalously yummy, fennel-pollen-scented pork salumi (the only meat on the dish) and a disc of honey crisp apple. Tiny, tartly flavoured scarlet pearls had been conjured from crabapple wine and begonias grown in the restaurant’s garden. Baby greens and minute white buckwheat blossoms were the finishing garnish. The dish was an umami bomb – so original – and the paired beverage was an inspired choice, the rich junmai nigori sparkling sake from Granville Island in Vancouver.

The gold medal – by a unanimous decision from the judges and to great popular joy if the roar that arose from the crowd when I announced his name is anything to go by – went to chef Blake Flann of Blake, in Canmore. His dish acknowledged the coming winter Olympiad in South Korea with a gojuchang-lacquered briquette of pork belly. I taste literally dozens of pork belly dishes every year while judging Gold Medal Plates; this was the best yet, the surface crisply crusted with the sweet heat of the glaze, the flesh and fat inside succulent, melting and packed with flavour. The belly sat on a sheet of “prawn paper” – firm prawn mousseline flavoured with garlic butter and thinly sliced – that also supported chunks of tart pickled raw prawn. More acid kicked in from yuzu juice pearls and there was crunch from crisp, nori-dusted ramen noodles to add to the fun. As a sauce that worked equally well with the prawn and the pork, chef gave us egg yolk, slightly cooked but still runny. Then he scattered peanut powder crumble and microgreens over all. The wine match was right out of left field, a dry, refreshing 2016 Pinot Meunier called ‘Bo-Teek’ from Vineland Estates in Niagara. Its fresh acidity and minerality stood up to the gojuchang surprisingly well.

So the roster of champions progresses… We will welcokme Chef Flann to Kelowna next February! And now only two great parties remain – in Ottawa and then in Toronto. I can hardly wait.