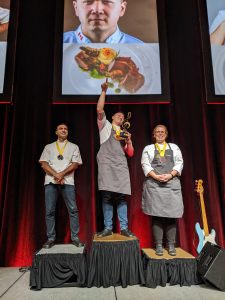 Has it really been a year since we last set forth across Canada to throw a fabulous Kitchen Party in a dozen cities? Last night we hit the ground running at the Metro Toronto Convention Centre with a campaign-opening show that totally rocked. You can find out all about our eminently worthy beneficiaries at greatkitchenparty.com – and see great pics of the shindig – but you really had to be there to experience the atmosphere in all its fulsome splendour.

We have fewer speeches and more music than ever this year. The dazzling Heather Moyse was our emcee, enthralling the crowd and making sure everything ran as smoothly and as fast as one of her champion bobsleighs. Forty other elite athletes also crowded the stage – Olympians, Paralympians, heroes of the Invictus games… Many of them came back up at the end of the evening to sing with the band – and what a band it was, led by four Canadian legends – Jim Cuddy, Tom Cochrane, Barney Bentall and Bill Henderson – five when you include the incomparable Anne Lindsay on violin. They were joined by Bill Bell on guitar, legends-to-be Devin Cuddy and Sam Polley, and Sam’s band’s super-tight rhythm section, Tally and Gianni Ferraro on drums and bass. Did they draw the crowd to their feet and into an impromptu mosh pit in front of the stage? Why yes they did! In fact we have never seen so much dancing at a Toronto event – an infectious energy that was delightfully reflected in the bidding for the Kitchen Party’s fantastic auction trips.

The culinary pillar was no less awe-inspiring, with Jamie Kennedy and Michael Stadtländer in the room as the evening’s Honourary Ambassadors. I remember the first ever event GMP staged, down at the Ex, in 2005, when I was there as an independent and somewhat cynical young food writer, reporting on the outlandish party. Michael and Jamie both competed. Their dishes were fabulous (no surprise) and the evening, though longer than it is now (I left after midnight and it still hadn’t finished) was clearly a precursor to greatness. Jamie and Michael (like NBA superstars, they don’t need surnames) are the cornerstones of Toronto restaurant culture and we were so honoured to welcome them to the Kitchen Party.

The panel of judges assembled to pass judgement on the competing chefs was equally august. This year, instead of trying to sum up their illustrious careers myself, I have asked each of them to describe themselves in 12 words or less, and here is what they sent me…

We tasted, we talked, we pondered… On a night with a great many delectable flavours, here is how the medals were awarded. 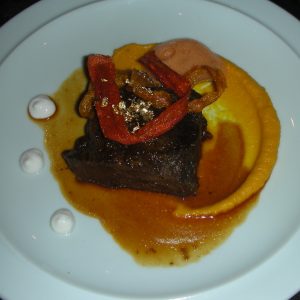 Bronze went to Renée Bellefeuille of the Art Gallery of Ontario. The look of her dish was inspired by the coming Rubens exhibition at the AGO – full of rich autumnal colours and with a final garnish of gold leaf to represent the gilded frames of the paintings. Chef braised a beef cheek, first marinating it in yoghurt and sumac, giving it a hard sear then slow-braising in beef stock flavoured with onion, garlic, carrot and celery. Finished with a carrot-and-sumac glaze, the meat was impeccably cooked – tender but not gummy the way beef cheeks can be, and full of deep beefy flavour. All around the protein we found an exploration of carrots – as a purée, sweetened with caramelized onions; as crispy ribbons perched on top of the cheek; and as an orange-spiked foam which Chef spooned onto our plates at the table. Dots of sumac yoghurt were an extra treat around the side of the plate. Her wine of choice proved a fine match – Thirty Bench 2017 Winemaker’s Blend, a ripe Bordeaux blend from the Beamsville Bench that worked well with the beef and handled the sweetness of the carrot with an easy grace.

We awarded the silver medal to Frank Parhizgar of FK restaurant. He presented a tart, tangy ceviche of succulent lobster meat dressed with lime juice, olive oil, salt, cucumber, cilantro and chive and garnished with borage and nasturtium petals. Beside it was a show-stealing little scarlet sphere that looked like a glacé cherry. In fact it was a hawthorn apple, hollowed out and filled with a quarter-teaspoonful of wild boar meat that had been spiced with pimento, paprika and tomato paste – a fabulous morsel! For crunch, Chef made ethereal chicharrons from the boar, dusting them with apple-cider salt and nigella seeds. A herb aïoli, a black walnut vinaigrette and a drizzle of green tarragon oil added other nuances. It was an elegantly focused dish, its forthright acidity echoed by Chef’s chosen wine – Flat Rock Cellars’ racy, mineral-driven Natja’s Vineyard 2017 Riesling from Niagara’s Twenty Mile Bench appellation.

Our gold medal was awarded by a unanimous decision and an almost unheard-of margin of 10 percentage points to last year’s bronze medallist, Keith Pears of the Delta Hotel. He called his dish “West Meets East,” a reference to his roots on Canada’s west coast. That was the source for his principal ingredient, gorgeous albacore tuna, cut into tiny drums, rubbed with miso and dashi and very briefly seared. Nestled between the pieces of tuna was a finely chopped salad of sunchoke, leek and caramelized Granny Smith apple, scented with parsley, thyme and chive. A rich leek foam was spooned onto the plate, garnished with tiny red petals of pickled pearl onion. Local honey from beehives in Riverdale brought a subtle sweetness to a yuzu oil, its unique citrus flavour echoing the Japanese flavours of the miso and dashi. Crispy chips made of sunchoke and, more unusually, sunchoke skin provided textural contrast and a sprinkle of powdered sunchoke finished the dish. The flavours were intense but perfectly harmonious and the wine match was flawless – the rich, complex, wild-fermented Reserve du Domaine 2017 Chardonnay from Domaine Queylus in Niagara.

Congratulations to Chef Pears! We will taste his food again next year in February at the Canadian Culinary Championships in Ottawa. Should he emerge triumphant from that gruelling contest he will win our great prize – a Lexus IS 350! It is an exceedingly sleek and beautiful motor car and well worth cooking for. The ultimate Champion will receive a two-year lease on the vehicle, courtesy of the great generosity of Kitchen Party supporters Josh and Erin Ens, owners of Ens Lexus in Saskatoon and Edmonton, who stepped up to supply this vehicle.

Last night was a triumph and a great start to our new campaign. When the medals had been handed out the band took the stage again and played on deep into the night. It was hardly worth going to bed as the Kitchen Party team had to be at the airport by dawn. Tonight we will do it all again in Vancouver and the flight is leaving early.