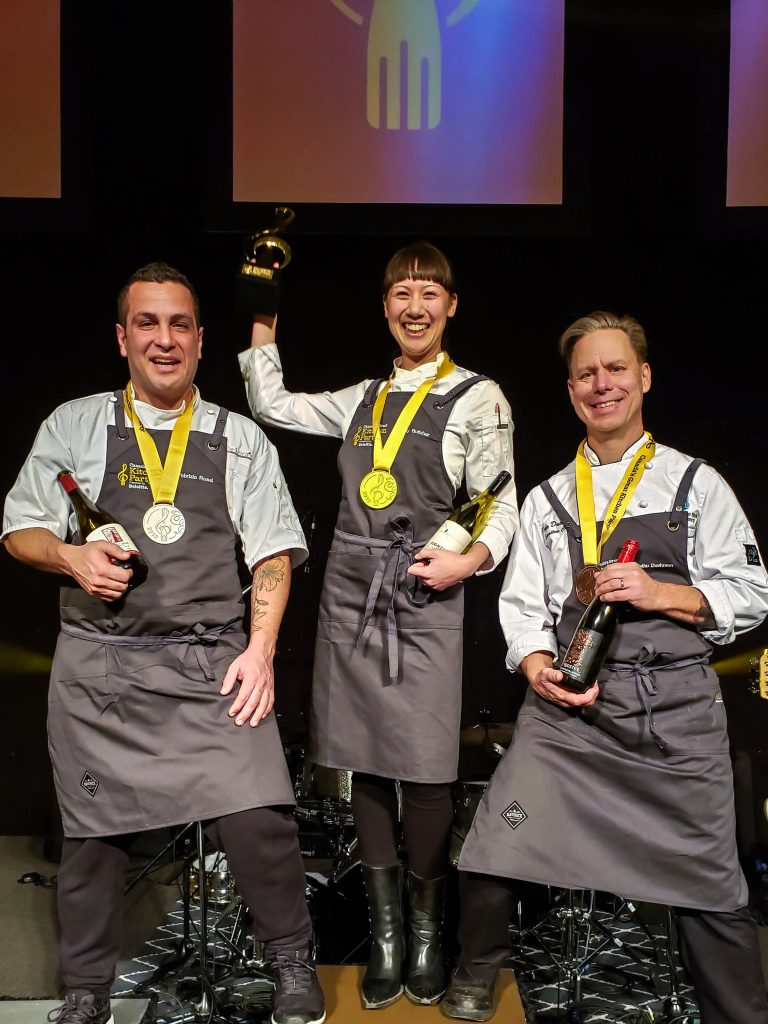 Canada’s Great Kitchen Party swept into Winnipeg last night, halfway through our 2019 campaign and batting a thousand after five spectacular events. There was really no question we would maintain our proud momentum – though it was a bit of a shock to plunge so suddenly from fall into winter. Manitoba already enjoyed its first major ice storm weeks ago and with temperatures at Minus 10o C I was delighted that our hotel is connected to the venue by a covered walkway. But what a warm welcome awaited from the team of local judges, led by Barbara O’Hara (Senior Judge, #pastrychefbella, #accbakery, quality ingredients + food cost + hospitality, sustainability, craft) and featuring Jeff Gill (Chef Hotel & Restauranteur, Instructor, currently Director of Food Services Red River College), Mike Green (Former CBC Radio food columnist, MasterChef Canada Top 5, writer at Peg City Grub), Arvel Gray (Award-winning writer, editor and broadcaster), Christine Hanlon (Author of Out of Old Manitoba Kitchens and Everything Manitoba) and Chef Jesse Friesen, Winnipeg’s Kitchen Party gold medallist in 2018!

The judges’ elegant private suite was a long way from the action but we caught almost all of the show, a truly rip-roaring evening emceed by Olympic gold medalist Jon Montgomery, these days renowned as the host of The Amazing Race Canada. He summoned a score of Olympic and Paralympic athletes to the stage, coaxing out fascinating and at times hilarious stories. Providing the music and thrilling the crowd as they always do was an incandescent line-up of rock luminaries: Jim Cuddy, Barney Bentall, Bill Henderson, Anne Lindsay, Geoffrey Kelly, Devin Cuddy, Sam Polley and Barney’s awesome rhythm section, Geoff Hicks on drums and Kirby Barber on bass. Dancers pressed up to the stage at every opportunity and called for endless encores, unwilling to let the band go home.

By then, of course, the culinary business had been concluded. I would say it was the best overall showing we have ever experienced in Winnipeg and dishes that would normally have shone did not even reach the podium. Three of them stood out particularly strongly – and in the end only half a percentage point separated silver from gold. Numbers were crunched and very fine points debated and analyzed before consensus was reached.

Heiko Duehrsen of Assiniboine Park Zoo won the bronze medal with a stellar dish inspired by his recent visit to Mexico. His protein was pork cheek, slowly braised for 48 hours with all manner of spices. The meat was perfectly textured, juicy, tender and deliciously porky; the spices formed part of a subtle but profound mole negro sauce, warmed by a multitude of chilies, a hint of bitter chocolate, walnut, tomato, et cetera, et cetera. Beside it was a spoonful of smooth polenta made from grilled corn that tasted just like the grilled corn cobs one buys on the street in Mexico. A small puck of red beet had been braised with hibiscus – then the braising liquid was reduced to a molasses and used to glaze the beet – a sweet, earthy moment. A touch of fermented aji offered a funky note while a teaspoonful of crème fraîche had been spiked with taijin spices, lime and chili. Garnishes were discreetly used – a sprinkle of grated cojita cheee, corn shoots and cilantro microgreens, and a crunchy crumble of chicharon, pumpkin seed and crushed tortilla. Chef suggested we put as many of all these components as possible onto each forkful and it was very good advice. It sounds like there was a lot going on but we were hugely impressed by the impeccable balance of flavours and textures that Chef achieved. His match was a good one, too – the smooth, aromatic Red Rooster 2017 Gewurztraminer, made in the Okanagan valley.

Fabrizio Rossi of De Luca’s South Landing won the silver medal with a splendid interpretation of a classic dish he described merely as “rack of lamb.” The meat itself was the lean and boneless eye of the chop, perfectly roasted and crusted with crushed pistachios. Beside it was an exquisite arancino, each grain of rice textured exactly à point and richly flavoured with gorgonzola and pear. It had been fried in very fine breadcrumbs to give the ball a crisp golden shell. A little sauce was judiciously spooned around – a red wine demiglace that found the sweet spot between lip-sticking and just too thin. A scattering of tiny perfect shimiji mushrooms, some beetroot microgreens and a quarter of a pinch of mint salt on the meat completed a suave, discplined little work of art that was beautifully complimented by the 2012 Pinot Noir from Leaning Post in Niagara’s Stoney Creek area.

Beating that lamb to the highest step of the podium was no mean feat, but Emily Butcher of Deer + Almond triumphed with a dish that illustrated exactly what happens to turnips when they go to heaven. There was protein on the plate – a big slice of roulade of superbly tender cod, some of it brined, some cured with maple and beet to give subtle variations of pinkness and sweetness – but turnips stole the show. My favourite moment was a finger-sized slice of turnip cake studded with porcini and chunks of a Chinese-style pork sausage Chef seasoned with rice wine, soy and cinnamon then fermented and hung for two weeks. Baby Tokyo turnips were served two ways – some lightly poached and then quartered, others served raw and sliced paper-thin like two-dimensional turnip cut-outs. Sweet and tangy little chunks of candied crabapple added a different, more chewy texture. Bringing everything together was a broth that Chef poured into our bowls at the table – a broth of fermented turnip juice enriched and soothed with butter and cream then sparked with green celery oil. The final touch was a crispy chip of caramelized turnip. Chef’s match was universally approved – the edgy 2018 Pinot Gris from Tightrope, on B.C.’s Naramata Bench.

It was great to see Winnipeg’s finest gastronomical gladiators duking it out at such a high level. Commiserations to those who were pipped at the post but huge congratulations to Emily Butcher. We now have six scarily talented champions already thinking about Ottawa and the CCC. I’m starting to hear from KP judges and other keen culinarians across the country booking places for that long weekend, eager to watch and taste the food these chefs prepare in the heat of the ultimate battle. “It’s like being part of my favourite cooking show on TV,” one of them pointed out, “except I get to eat the food from 11 of Canada’s top chefs instead of just looking at it!” Very true… You can be part of it all by joining the trip on greatkitchenparty.com.

Before then, however… tomorrow, in fact… we’re taking our event to every kitchen party’s spiritual home – St. John’s, Newfoundland!