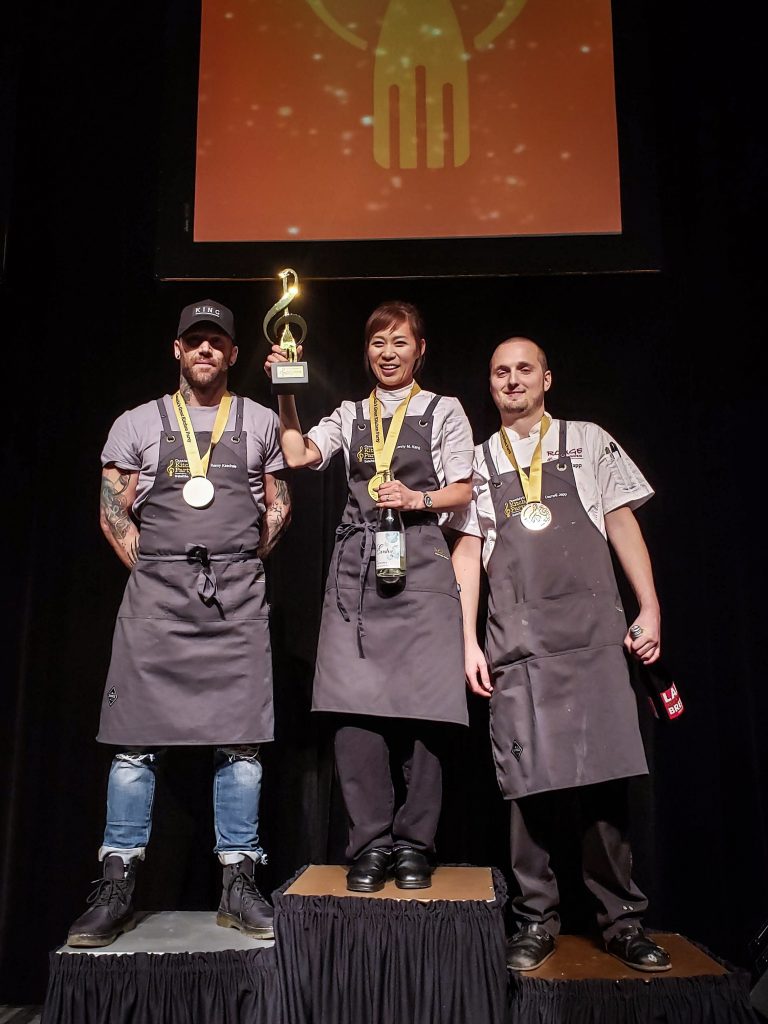 There was snow on the ground as we drove into Calgary, early on Thiursday afternoon, and flurries of excitement in the air. “The city needs to let off steam,” one of our local judges told me. Of course, there is no better way of doing that than coming to the Great Kitchen Party, especially when the emcee is George Stroumboulopoulos – as eloquent, wry and charming as ever – and when you have dozens of elite athletes from Olympic, Paralympic and Invictus games to share their stories and make everyone’s heart beat faster. And our band set the crowd alight, led by the brightest star in the musical heavens, the great Jim Cuddy, alongside the Kitchen Party’s new secret weapon of mass adulation, Bill Henderson, with the amazing Anne Lindsay on violin, the dazzling Devin Cuddy on piano, the sensational Sam Polley on guitar, and the tightest rhythm section in Canada, Tally and Gianni Ferraro on bass and drums.

As for the culinary pillar, the Kitchen Party had gathered together a full complement of ten star chefs, all of whom were clearly determined to win. This year, there seemed to be a mood among them to create a dish that reflected the way they cook in their restaurants – a fine idea that yielded a fascinating variety of offerings. In the absence of judges Kathy Richardier and Jinhee Lee, there were five of us to adjudicate – a crack forensic-eating team led by John Gilchrist (Senior Judge, food and travel writer, restaurant critic, educator, always hungry); with Michael Allemeier (chef, educator, Certified Master Chef, forager, gardener, hiker, family guy and climber); Jamie Herbison (wine educator at Willow Park Wines & Spirits, retired radio personality); and Chef Dave Bohati, Great Kitchen Party gold medallist, 2018.

Darnell Japp of Rouge won the bronze medal. He had the good sense to heat the judges’ plates which liberated the rich aromas of his dish – a heady scent of beef, butter and truffle that set nostrils akimbo. Wagyu beef shank was his principal protein, rubbed with fresh thyme and black pepper and left to itself for three days before being seared over charcoal then braised for nine hours in Wagyu marrow stock. That stock was then reduced, mounted with butter and infused with fresh black truffle to become a most seductive sauce. The meat itself, so juicy and richly textured, was pulled apart and mixed with salt-cured foie gras, Saskatchewan chanterelles and shiitake mushrooms and used to stuff a ravioli. Pasta is always tricky at an event like ours – it can easily end up under- or over-cooked – but Chef timed it perfectly. Each judge got a single raviolo crowned with a teaspoonful of a white truffle gremolata made with the rendered Wagyu marrow, sourdough crumbs, chives, parsley, garlic and white truffle – a subtle but profoundly flavourful addition. He drizzled eliptical rings of brown butter parsnip purée around the raviolo and dressed the plate with some wicked charcoal-grilled chanterelles. Add a sprinkling of finely powdered tarragon and a pinch of ruby streak mustard greens dressed with lemon and olive oil on top of everything and voilà, the dish was done. Chef wanted a red wine that would cut some of the richness on the plate and he chose well – Lake Breeze 2017 Pinot Noir from the Okanagan’s Naramata Bench.

Kenny Kaechele of WORKSHOP kitchen + culture won the silver medal. He wanted to offer a dish that expressed his restaurant’s everyday personality – a great idea in the eyes of our sold-out crowd who gave it the People’s Choice award. At its base was a scrumptious soft roti made with flour and coconut water and fried to golden perfection. Onto this, Chef piled some sensationally tasty meat – pork collar that had been braised with passion fruit, cilantro and garlic (inspired by Brazilian cooking and by chorizo verde sausage, said Chef) – and some mildly spiced curtido like a Latin cabbage coleslaw that tasted of cumin and citrus. Toasted queso fresco was crumbled over the top and a squirt of schmaltz aïoli added extra richness and body. Some microgreens were the final garnish. “Eat it with your hands,” suggested Chef and we did, revelling in the way the flavours combined. The wine match was also a winner – fruity, bubbly Fitz Brut from the Okanagan.

Jenny Kang of Shokunin won the gold medal with a meticulous, dainty, Japanese-inspired creation she called Sea Garden Eden. Its structure was simple – five impeccably fresh kinds of seafood arranged in a row – just a single bite of each – and I’ll start by describing them. First a wild BC side stripe shrimp gently cured in a bath of iced sake, salt and water then rolled in nori powder. A single plump slice of this was set onto each plate. Nestled up beside it was a rosette of very finely sliced raw Hokkaido scallop, as sweet and fresh in its way as the shrimp. Then a rice and nori crisp like a tiny pillow topped with gorgeously delicate fresh BC sea urchin, itself crowned with a tiny portion of black tobiko roe. Beside this we found a curl of aged raw ahi tuna, and finally a roll of New Zealand snapper cured by pressing it for five hours between kelp sheets with a touch of yuzu – just enough to enhance but niot mask the fish’s own natural flavour. What made the dish so special was the sauce – a clear but quite viscous take on Vietnamese nuoc cham but using citrussy yuzu instead of chili heat. It was funky, powerful, complex and added a whole new south Asian dimension to what was otherwise a straightforward Japanese presentation. To garnish the dish Chef added a number of intensely flavourful grace notes – a brunoise of tart green apple, some dots of Yuzu gel, tissue-thin slices of radish and finally an ethereal tuile like a crispy golden net made with fried fennel and apple juice. It was all so exquisite and Chef’s chice of wine was inspired – an off-dry bubbly from Summerland, BC, called Evolve Élan Effervescence that picked up the citrus compoents and the natural sweetness of the seafood admirably well.

Congratulations to Jenny Kang! We will welcome her to Ottawa for the CCC in the dead of winter and I am thrilled at the thought of tasting her food again. Calgary was another highly successful event; next week we press down on the excitement pedal with Kitchen Parties in Montreal, Saskatoon and Kelowna… Watch this space.