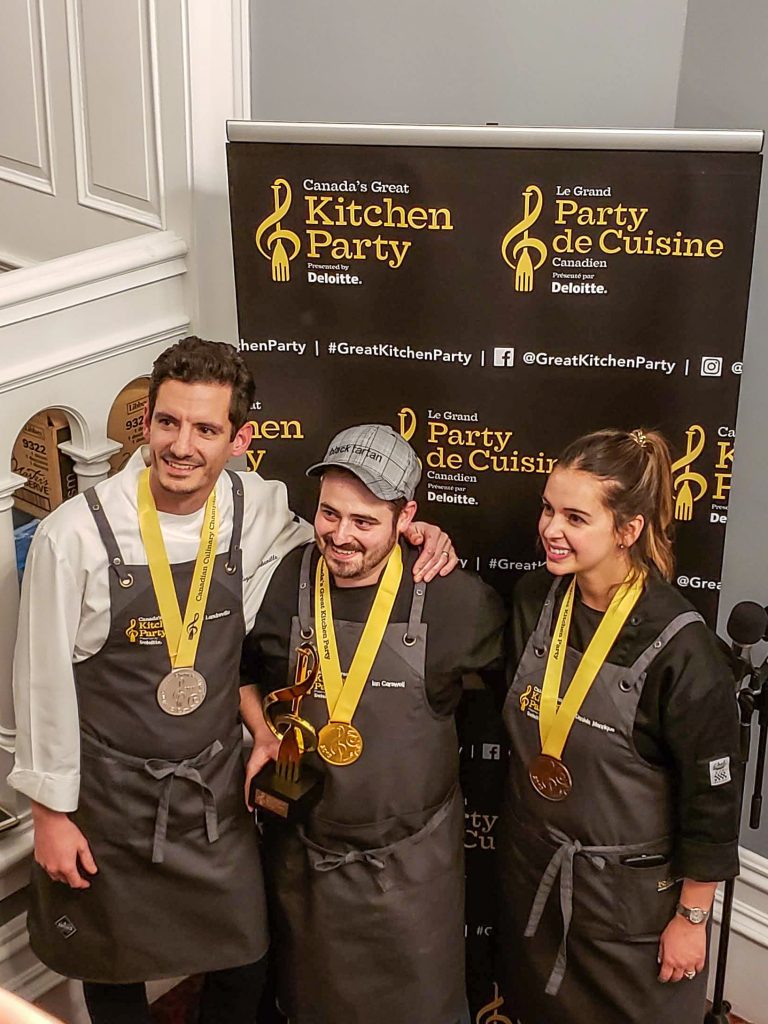 Twelve cities, twelve Great Kitchen Parties; twelve worthy champions found. Last night was the final chapter as we finished our regional campaign in the nation’s capital – in the stately mansion occupied by Le Cordon Bleu Ottawa Culinary Arts Institute, to be precise – testing the talents of eight of the finest chefs in the Ottawa-Gatineau area. The emphasis of the evening was firmly on the culinary side, though we were honoured by the presence of one of Canada’s most renowned athletes – Olympian legend in both canoe-kayak and cross-country skiing, Sue Holloway. When the chefs finally closed their stations, our smashing emcee, Sylvie Bigras, drew marvellous stories from Sue, to the delight of the crowd of 150 VIP guests. Meanwhile the judges deliberated.

We awarded the bronze medal to Daniela Manrique of The Soca Kitchen, who had also reached the podium last year – and who had a baby only three weeks ago! She presented the most exquisite dish, centred upon two impeccably cooked little slices of lomito, also known as beef tenderloin, that had been rubbed with three kinds of dried, smoked, ground chilies – puya, guajillo and negro. The meat rested on a small mound of tangy hazelnut romesco of a gorgeous dark orange colour, and beneath that was a second sauce of spiced squid ink that Chef had artfully spread into a pattern of three delicate interlocking rings, decorating the centre of the plate. On top of the beef was a salad of raw shaved artichoke – no more than a tablespoonful – in a fresh vinaigrette of fermented black garlic and white soy. In total contrast to the artichoke’s crunch, a spoonful of quivering sea urchin paté sweetened with port and caramelized pear was nestled beside it. Two sorrel leaves were the final garnish. It was a discreetly complex little creation, layered with all sorts of smoky flavours that found many echoes in the excellent wine match – Thirty Bench’s 2017 Small Lot Pinot Noir from Beamsville, Ontario. This dish also won the People’s Choice award for Chef Manrique!

Ben Landreville of Sidedoor won the silver medal. His dish was an elevated version of the classic Vietnamese banh khoai, a pan-fried “happy pancake” made of a rice flour, mung bean and turmeric batter. Its crispness was softened by nuac mam cham dressing, a sweet-salty-funky dressing of fish sauce and vinegar, then all sorts of treats were piled on top. We found juicy spot prawns poached with garlic and chilies. Close by were chunks of sausage made with ground pork and wood ear fungus that had been poached in banana leaf. The sausage was topped with a delicious sauce, pungent with galangal and chilies, sweetened with jaggery and given huge depth of flavour by dried shrimp that chef had made in-house. Brined bean sprouts, microgreens, tart little begonia blossoms and Swedish ivy all made telling contributions – so much more than mere garnish. It was a dish of real integrity, with nothing gratuitous or out of place. The judges loved its balance and several of us would have liked to eat a second one. Chef’s wine match coped brilliantly with the forthright heat and sweet acidity – Rosehall Run’s 2017 Hungry Point Unoaked Chardonnay from Prince Edward County.

Ian Carswell of the 30-seat Black Tartan Kitchen in the town of Carleton Place, Ontario, won the gold medal with an elegant version of a classic Scottish dish – “lamb with neeps and tatties.” The lamb came from Milkhouse Farm, not far from the restaurant, and Chef was careful to waste nothing of the animal. He gave us a wee coin of the loin cooked sous-vide to tender perfection, crusted with buckwheat and dressed with an unctuous glacé stock that he spooned on, tableside. The lamb trimmings and offal were mixed with mushrooms and the sort of spices normally used in haggis, then whipped into a silky-smooth cream with just enough solidity to retain its shape when formed into a cylinder. This was coated with a skin of jelly made from rutabaga and carrot juice. It was a pinky-sized morsel set on top of a firm postage stamp of a peppery terrine made from the lamb’s hind quarters. Yet another element was a miniature perogie, crisp and buttery from the pan, and stuffed with Tomme sheep’s milk cheese (also from Milkhouse Farm) and braised meat from the lamb’s shoulder, neck and foreshank. A snow-white spoonful of aerated Tomme chantilly crowned the trio while the plate was decorated with a swooping line of a yellow purée made from rutabaga, carrot and caramelized onion. A dainty fin of a tuile made from lamb belly stock completed the homage to the animal. It sounds so busy, but the dish looked stunning and everything made total sense on the palate. Chef chose his wine from a local winery in Carp, Ontario – the fruity Kin 2018 Pinot Noir. Huge congratulations to Chef Carswell!

And now we have found all the chefs who will go on to compete at the Canadian Culinary Championships in Ottawa next year from January 30 to February 1. Here are their names:

Two of these chefs have been at the CCC before – Darren Craddock twice, in fact. But the great majority represents a generation that is just coming into its own, newly arrived on the highest plateaux of Canadian gastronomy. Some of them have climbed through the ranks of our own competition, serving as sous chefs or line cooks with other competing chefs in years gone by. Others have appeared almost out of the blue. After 13 years of our project, I can see an enormous difference in attitude between these chefs and their forebears. When we started, there was hardly any awareness of the work other chefs were doing in other parts of this country. At best, I saw an occasional liaison between kitchens in Toronto and Vancouver, between BC and Alberta, but most chefs worked in regional isolation. So much has changed! We must thank food television and social media, and the rise of local food festivals that bring guest chefs in from other parts of the country. We must also give credit to our own project. Chefs and sous chefs who meet at the Canadian Culinary Championships form friendships and share work opportunities; they discuss local ingredients and foodways from their own parts of Canada; they issue one another invitations to come and cook in their kitchens. Slowly, over the years, I have watched a culinary network evolve at the CCC and I have been thrilled to see it happen.

And now the Canadian Culinary Championships is taking its next step forward, moving from Kelowna to the nation’s capital for the foreseeable future. There we will be affiliated with Ottawa’s Winterlude festival, and the VIP guests who come to see our competition can also skate the canal and enjoy all the other fabulous midwinter festivities. And of course they will eat some of the best food in the country! Having tasted every one of the hundred or more dishes presented in our regional competitions this year, I can say that the overall standard has never been higher, and that every one of the regional champions has the talent to reach the podium. I don’t know if anyone is taking bets on the outcome, but there are no obvious favourites this year – and no one who can be safely ignored. In just ten weeks time, we will hand over the bottle of mystery wine to each chef and the fun and games will begin. Beyond that, only one thing is certain: it’s going to be an extraordinarily exciting competition.