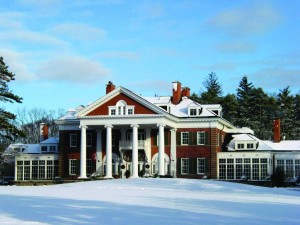 Such a pleasure to go back to Langdon Hall this week for a brief refresher course on utterly pampered country house living. Coming up the long drive, the distant façade of the great hotel always looks particularly dramatic when the acres of lawns are white with snow, dazzling in the cold winter sunlight. Inside, logs blaze in the fireplace and the air is faintly scented with woodsmoke. They have a new lobby dog in training – a Clumber spaniel puppy called Phoebe who is still at the roly-poly rub-my-tummy stage and is entirely adorable.

And the innovation doesn’t stop with her. Owners Bill Bennett and Mary Beaton are past masters at keeping their hotel fresh and relevant without diminishing anything that regular guests have come to love and expect. This time, they have added a wing onto the hotel. Looking out of our window across the croquet lawn to the vegetable garden, I was vaguely aware that something had changed – an addition to the cloister to the right, behind a cluster of fir trees, close by the tennis court. It blends in impeccably and doesn’t look like a very big deal until you go inside and take a closer look. Space has been brilliantly camouflaged – 35,000 square feet of it – more than half as much again as Langdon Hall’s previous area. At its heart is Fir Shade Hall, an event space that would be absolutely perfect for a wedding of, say, 120 guests. In the crook of the wing is Langdon Hall’s superbly equipped new spa (opening by the end of March), yet another string to the property’s bow. There are also eight new rooms on the top floor, including a suite with a stunning view across the Grand River. And next to Fir Shade Hall is a sparkling new kitchen where chef Jason Bangerter can produce summer barbecues and marriage feasts, afternoon teas and elaborate dinners and where he will give occasional cooking classes to interested parties. It frees up the main kitchen in the house itself so that Bangerter’s brigade of 36 can concentrate exclusively on the restaurant and two private dining rooms without any distractions at all.

Chef was kind enough to cook for us on the evening of our visit. We sat in the relative intimacy of the new dining room with its view out to the nocturnal garden, fairy lights in some of the snw-dusted bushes lending a pretty magic to the scene. We started with a little goujère, piping hot and full of runny cheese spiked with caramelized onion, presented on a dusting of tangy shallot powder. A flute of Benjamin Bridge’s brut rosé from Nova Scotia (a wine that featured beautifully in the recent Canadian Culinary Championship) was the ideal refresher.

Another amuse – “chef’s version of a tater tot” – was a tiny cube of fondant potato cooked in duck fat and dotted with duck egg yolk, raisin purée and just enough espalette powder to give a lingering prickle of heat.

For our first appetizer, Bangerter folded caramelized honey into soft Monforte goat cheese and formed it into a finger-sized cylinder. Then he set it about with a variety of delectable condiments starting with delicate shards of dehydrated milk that rose like brittle white fins from the cheese. There was raw shaved fennel and fennel that had been lightly cooked and preserved, hazelnuts and lemon chive oil, sourdough crumbs tossed with orange and lemon zest and a dot of pungent geranium jam. Chef likes his moment of sweetness in even the most savoury dish, it seems; here it was beautifully balanced by the citrus. And with it our sommelier of the evening, Samuel Lapointe, proposed a classic goat-cheese match from the Loire, a dry Vouvray from Domaine Huet.

No need for added sweetness in the next course – silken slices of raw scallops, diver-caught by a group of First Nations fishermen in B.C., and outrageously rich and creamy. Bangerter gave them a sort of light ceviche treatment with an apple cider gastrique spiked with lemongrass and geranium leaf from Langdon Hall’s greenhouses and enhanced the dish with a pleasingly bitter crabapple purée, tissue-thin slices of raw apple, tiny leaves of sour wood sorrel, and a teaspoonful of mild, creamy yoghurt. The dish was served in a scallop shell, its daintiness emphasized by a ruff of evergreen fronds and a massive, three-legged stone base like something from an Olmec tomb. Dry, fresh Pierre Frick 2012 Gewürztraminer proved a dazzlingly appropriate match.

How to describe the next dish…? You could call it a deconstructed soup. A rich, thick sweet potato broth had been spooned onto the plate, lapping at some balls of poached pear, a sprinkling of lime leaf powder and half a dozen little pink minarets of what looked like soft meringue but was actually a stiffened seaweed foam. A taste of Christian Moreau’s 2014 premier cru Vaillon Chablis was just dandy alongside.

And then – ah yes, the lobster… A whole plump tail first poached in its shell and then taken out and poached once again in butter, but still tremblingly rare and tender. It was a simple presentation but stunningly effective, the lobster enisled by a rich, weighty black truffle beurre blanc and topped with a great deal of Acadian sturgeon caviar. The juicy, complex 2008 Hanzell Chardonnay from Sonoma may have been the wine of the evening and was a sublime match.

Where could we go from here? A foie gras intermezzo. At the base of the bowl, Bangerter set a disc of foie gras ganache, its texture like puréed torchon. From there a salad climbed up one side of the bowl as if trying to escape – snow crab meat poached in a court bouillon then chilled and flaked, sliced raw grapes, sliced pickled grapes in a Cabernet vinaigrette, late harvest grapes turned into a gel. Over the top, cunningly disguised as more snowy shreds of crab, were the rasped gratings of a frozen foie gras torchon. Big Head’s big-bodied Chenin Blanc (20 percent botrytis affected) with a nose like honey, lemon and lanolin, delighted us.

After such riches, the idea of chicken as a main course seemed like a fine idea. The treatment was impeccable. Bangerter confited the legs then turned the meat into a terrine with a poached mousse texture, flavoured with chanterelles and a variety of herbs. Fragments of chicken skin added crispness while pale drums of salsify murmured their own shy little song. Beside this he placed a tapering wedge of tender, flavourful breast meat dressed with onion soubise, butter-glazed smoked potato and a single brussels sprout petal. One sauce was a fortified Madeira jus, the other was a foamy, lip-stickingly rich chicken bone velouté. Back to France for the wine – a Chinon – Pithon-Paillé 2008 Vieilles Vignes, blessed with the perfect weight and texture for our heritage hen.

The evening’s finale was fascinatingly intense – a passionfruit mousse served in a glass tumbler with green fins of coriander paper and salted chocolate crumbs. An old ice wine from the Rheinhessen with the colour of whisky and a nose of coconut was suitably eccentric and awesome, the Balbach Nierstein Oelberg 1999.

Then Jason Bangerter came out and sat with us for a while, sharing some petits fours and his latest creation, Langdon Hall’s own blend of CocoaBerry chocolate, an earthy, smoky cuvée personally created by Bangerter and called “Terroir.” I have no doubt he would have been awarded the Relais & Châteaux Grand Chef honour by now if that organisation still offered it. Instead he won the 2015 Relais & Châteaux Rising Chef Trophy and one can totally understand why. The hotel’s kitchens, both the established and the brand new, are in most excellent hands.